(9-18) We're not sure we want to become an obituary site, but the passing of some special pioneers deserves note. Diane Leather is one of them. The British runner was the first woman to break 5 minutes in the mile, which she achieved in the same month--May, 1954--that Roger Bannister broke 4 minutes.

The New York Times has a short obit and great photo today.

Read more »
Email ThisBlogThis!Share to TwitterShare to FacebookShare to Pinterest 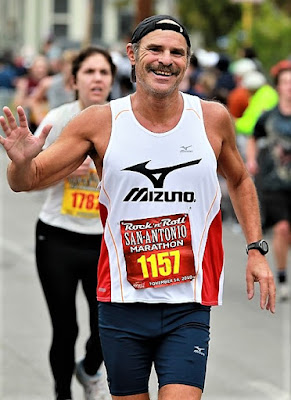 (9-18) If Bob Wischnia’s (Wish) name seems familiar, it’s because he spent 26 years as the deputy editor at Runner’s World (started in 1977), wingman to editor-in-chief Amby Burfoot.  He met and ran with some of the greatest runners in history, including John J. Kelley, Herb Elliott, Alberto Salazar, Rob de Castella, Lynn Kanuka (nee, Williams), Steve Scott, Rosa Mota, John Gregorek, Grete Waitz, Meb Keflezighi, Bill Dellinger and many, many others. After RW he worked for Mizuno and is now retired. He lives in Austin Texas with his wife, Anita Harbor, and twin daughters, Abby (who lives in Los Angeles) and Beth (who lives in San Francisco), 28.

“My goal in college (Arizona State) was to travel the world and get somebody else to pay for it. In that respect, I succeeded. I was very fortunate to visit more than 30 countries and covered several Olympic Games (Moscow, Los Angeles, Seoul, Barcelona), numerous World Championships and various track meets, road races and marathons all over the place,” says Wishnia. “I was a lucky guy.”

Started running: November,1957. I was 7 years old.
I grew up in the 1950s, primarily in State College, Pennsylvania, where my father taught electrical engineering at Penn State, and Stamford, Connecticut where I attended Belltown School (most famous alumni: Joseph Lieberman). The school was so old and small it didn't have a cafeteria so everyone went home for lunch. I lived about 1.5 miles away and in the winter it was too cold to ride bikes. My parents worked, so in third grade I began running to and from home at lunch. It was the highlight of my day (still is) and I ran through these beautiful woods on old Indian trails. Everyone thought I was weird, which was fine.

Why did you start running? I loved it and especially loved the freedom of movement. Eventually, I started timing my runs and


(9-18) On Sunday, September 10, New York's Sid Howard ran the Fifth Ave Mile for the 35th time in a row--the longest-known streak among Fifth Ave milers.  Howard, 79, hit the finish line in 10:11, not his best time but he says he's happy to keep the streak alive. He is a 10-time age group winner on Fifth Ave.

Howard’s track and field career includes five world championships, 50 national championships, five world records and eight gold world champion medals. Also on his resume are the American indoor 65-69 records of 2:19.4 for the 800, 5:23.05 for the mile, and 4:45.36 for 1500 meters. He was inducted into the USATF Masters Hall of Fame in 2005. Howard is running, coaching, and continuing his role as ambassador for the sport he loves, always with a smile and encouraging words for everyone he meets.

Sid lives a full life. He loves to break out in his signature dance moves at any moment; he loves the Bermuda Half Marathon where he is the only non-Bermudian to have native status at that race; he loves the 90+-year-old seniors he teaches strength training to as part of his job with New York Road Runners. And, he loves his streak at the Fifth Avenue Mile (FAM), which he has been running since 1983.

Why did you start running the mile? You were a marathoner? I had just run my ninth marathon (eight more than I should have!). I didn’t know anything about what I was doing. I just liked to run. So when I was invited to run the mile in 1983 I thought,