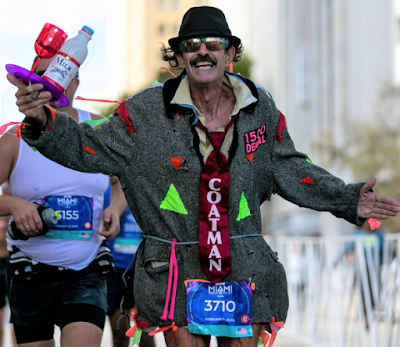 (Apr. 2020) Dennis Marsella calls himself "the original stunt runner," and he might be just that. Or the most-enduring. Now 69 and living in Fort Lauderdale, FL, he started as "Coatman" in 1981--no easy feat, wearing a hot winter coat in the Miami Marathon. Through the years, he has evolved to pizza delivery and sometimes champagne server, particularly in the New York City Marathon, which he has completed 33 times. You could never call Marsella boring or colorless--maybe eccentric. But he's covered 130,000 miles by his count, and is planning on a lot more. "I want to run until I'm 100," he says.

Career-profession? I worked 15 years as lifeguard, also a security guard, and yes I have been paid to advertise for companies while I do training runs and races all over Fort Lauderdale.


How did you start running and why? I first ran track in 1967 at Rutherford High School in Fort Lauderdale. We also ran as part of lifeguard training. I was motivated to run my first Miami Orange Bowl Marathon in 1981 as a survival stunt