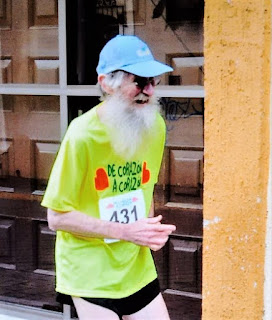 (2-19) Jim Austin is too humble to say much about his career, as you'll see below, so we're going to fill in a few details here. Since 1972, he's been a professor at the Harvard Business School, from which he graduated. He was co-founder and chair of the HBS Social Enterprise Initiative, which has worked with nonprofits and socially oriented businesses around the globe. He has been the author or editor of 16 books in his area of expertise, and one--Gone Running--about his passion. In 2008, Austin received the Aspen Institute's Ashoka Award for professors who integrate social and environmental issues into their work. Gone Running describes runs he has taken in far-flung places, including Oaxaca, MEX, where he and his wife, Cathy, now live half the year. In 1968, Austin, now 76, finished 84th (3:07:21) in the Boston Marathon.

What was your career/profession? University Professor, Harvard Business School

When did you start running and why? In elementary school. I thought I was fast in my school, but finished last in our first track meet against other schools. Decided I wasn’t really much of a sprinter. Didn’t really start competitive running until high school cross-country and track (on the swimming team in between).

How much did you run in your peak years? When training for marathons, about 70. Otherwise about 40.


Top races or achievements?
*Boston Marathon – 1968: It was my first marathon, I had little idea