PROFILE--Bill Thorn just finished his 50th Peachtree in a row. 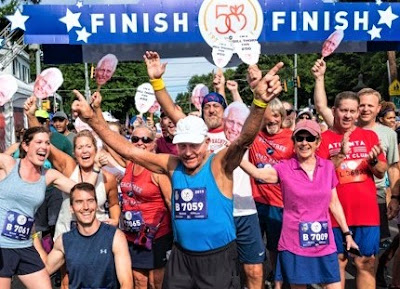 (July 2019) Bill Thorn ran the inaugural Peachtree Road Race in 1970, which has now become the world’s largest 10K. Now 88, Thorn and his family, holding life-sized printouts of his face, celebrated his 50th running of the race on July 4 (in a modest, celebratory 2:17:58). Thorn's the only person to have run all 50 Peachtrees. He also just stepped down from a 56-year career as a track, cross-country and football coach with a winning record of 44 state championships.  Thorn is not resting on his many accomplishments and settling into retirement. He’s too busy working out 90 minutes every day and figuring out his next phase of life.

Career/Profession? Growing up in Birmingham Alabama, I worked in the steel mills but realized I would die if I didn’t get out. So I went to college and majored in