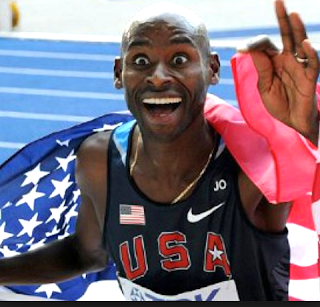 Friday morning in New York, Lagat made the following key observations about his marathon preparations and goals:

*** "I ran a couple of half marathons in the 1:02s earlier in the year, so I think I should be able to go through the half fairly comfortably in 65-66, and then finish strong. I like the atmosphere surrounding the marathon, and it's good to have new challenges."

*** "During the training, I sometimes wondered if I was out of my mind. After my first 30K long run, I thought, 'How can anyone go another eight miles?' After my first 20, I was out for a day and a half to recover.  Twenty-two was crazy. But my last 24 finished with a 5:24 final mile, at altitude in Flagstaff, so I believe I am well prepared."

*** "I wasn't a high mileage guy in my 5K training, and I'm not now. I never hit an 80-mile week. But I did lots of hard stuff like 15 milers in the morning followed by 75 minutes of biking or water-jogging in the afternoon. I spent a lot of time on my training, nine weeks in Flagstaff, and I feel very strong now."

*** "I've gotten so much great advice from my friends. Meb told me: 'Don't think old. Think confident and run strong.' Eliud Kipchoge told me: 'Don't worry about the Wall. Block it and all other outside thoughts from your mind. Run tough. Don't let a gap develop between you and your pack. Don't worry about the distance, or you might not fully commit to the race. Your goal must be total commitment."

Here's an Olympic Channel video about Bernard Lagat and his marathon preparation.

PROFILE--"Dr. Frank" Adipietro has a been running for 38 years 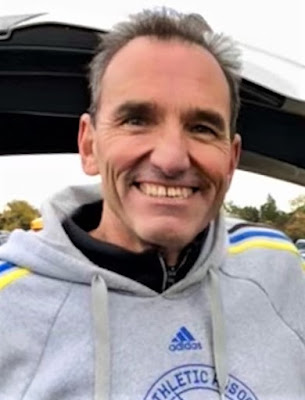 (11-18) Born and raised in Brooklyn, "Dr. Frank" (as he is widely known) grew up in a family where sports and athletics were not part of every day life. Putting on 50 pounds during medical school, he knew he had to get in shape. The motivation came from his dad, who challenged him to run a 5K. He is now a 15+-year streaker at the New York City Marathon and has a total of 48 lifetime marathons. Dr. Frank, 61, resides on Shelter Island where he is an Interventional Pain Management specialist Anesthesiologist in Eastern Long Island Hospital in Greenport NY. He commutes to work by boat, his Grady White 23-foot outboard, every day, weather permitting.

Started running? Why? October 1980. I came late to running, not starting till my freshman year of Medical School to train for a race with my dad. Initially we ran just a few 5Ks. I was quite out of shape at the time and 40-50 lbs overweight.

Did you have an early inspiration or person who motivated you? That would be my father. He got me started when he challenged me to run the 1981 New York City Marathon. I was out of shape at the time and he was starting to catch “Marathon Fever” thanks to Rodgers & Shorter. So a thank you to them as well for getting us started in our running careers.

Later in life I met another inspiring person, my wife Mary Ellen. While I was dating her, she started to run

(10-18) Nina Kuscsik, a noted pioneer of women’s running, won the 1972 New York City Marathon in 3:08, just seven months after being the first official female to win the Boston Marathon. She ran the inaugural NYC Marathon in 1970 but dropped out at mile 15 with gastro issues. She started again in 1971 and placed second to Beth Bonner, both women breaking three hours (Bonner in 2:55:22 and Kuscsik in 2:56:04). She went on to win the New York City Marathon in '72 and '73, and to compete in more than 80 marathons in her lifetime. Here Kuscsik, now 79, recalls some of the highlights of her long running career.

Why and when did you start running? Growing up in Brooklyn with three siblings, we were always outside playing in the street. I was a tomboy and loved to roller skate and ride my bike. When I was 15 Roger Bannister ran his historic sub-4-minute mile and I wanted to see