PROFILE--Bob Anderson has been running for 56 years 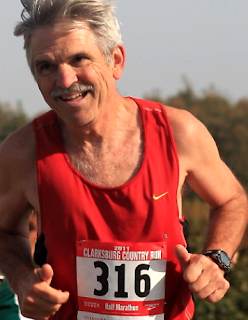 As the founding publisher-owner of Runner's World magazine ("Making Tracks Since 1966"), Bob Anderson played a pivotal role in the American running boom. Less well known: He has been, and at age 71 remains, a passionate runner and racer. In recent years, Anderson has thrown his creative energy behind a Double Racing concept ("Running with a halftime break") and a free Running News Daily Headlines service.

Career/profession? I was the founder and publisher of Runner's World magazine from 1966 to 1984. Also, founder/publisher World Publications (published over 100 books including 25 running books and a couple of years of booklet of the month), CEO/founder of Ujena (women’s swimwear and fashion) 1984 to present.  We have had a website UjenaFitClub since 2010 to present. (It's a great place for runners to log all their races and more). Founder of Double Road Race Federation from 2010 to present.  We have staged and I have run over

PROFILE--Jim Sloan has been running for 43 years

Jim Sloan grew up surfing and skiing in Southern California. He ran on the cross-country team at Santa Barbara City College and fell in love with the sport. His job in the computer technology industry in the 80s took him around the world where he ran throughout Asia and Europe. “Every wrong turn leads to an adventure,” says Sloan. “I love to see a city waking up as I run through it in the early hours.” Sloan, 61, founder and CEO of a multinational manufacturing business, is now retired and has more flexibility and time to run with his Santa Barbara Running and Racing team buddies.

When did you start running and why? In July, 1975 after I had just finished high school. A friend and I were getting ready to move away to college and he suggested we try out for the cross-country team. We started running in Los Angeles in the hills around Griffith Park.

Did you have an early inspiration or person who motivated you?  I grew up in the era of Prefontaine and although he wasn’t a hero per se, I was inspired by the whole bad boy, anti-establishment runner image he embodied. My running club visits Eugene quite often and I get goose bumps every time I run on the U of O track.

How much did you run per week in your peak years? Now? My peak was probably in the mid-80 miles per week range when I was in my 40s and early 50s and training seriously for marathons. Now, I can’t get