PROFILE--George Banker has been running for 37 years


Profile -- George Banker has been running for 37 years 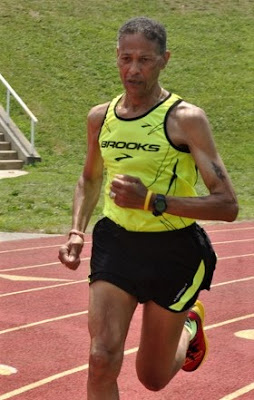 George Banker, a retired Technical Sergeant (TSgt.) in the U.S. Air Force followed by 25 years at IBM, has run 113 marathons. He clocked his 100th at the 2014 Marine Corps Marathon (MCM). He was averaging 50 miles per week prior to his heart surgery in 2017. Nothing keeps Banker, who resides in Fort Washington MD, down. “If you want something bad enough, you will do whatever it takes to get it done.”

Started running and why? June 1982. (DOB: December, 1949). I picked up running while working for IBM. Every summer, my office sponsored a one-mile run that the branch director won every year. When they asked me, then 32, to participate, I thought I’d kick the butt of the “old gray-haired man.” Well, I didn’t win it, didn’t even come close. Ran a 12-minute mile and thought I’d die. It was ugly. I decided to become a better runner and started reading running magazines. My first race was the 1982 Philadelphia Distance Run (half-marathon). My goal was to finish in two hours and I ran it in
Read more »
Email ThisBlogThis!Share to TwitterShare to FacebookShare to Pinterest
Labels: profile

Having grown up mainly concerned about our cholesterol and blood pressure (and weekly mileage total, of course), many of us have trouble absorbing some of the newer health-fitness markers. One of those is telomeres--the tough little strands, sometimes compared to the plastic tips on shoelaces--at the end of chromosomes.

Deteriorating telomeres are a bad thing, a sign of aging and disease. Anything that helps to maintain telomere health is essentially a good thing. An anti-aging thing. Previous research has shown that exercise protects telomeres and helps them regenerate. That's a very good thing.

Now German investigators have shown for the first time that endurance aerobic training and interval training promote telomere health, while strength training does not. This doesn't mean you should abandon strength training; you shouldn't. It has many benefits. Among them: It helps protect you from falls.

But as far as total health and anti-aging vigor go, it appears that endurance training beats strength training. As the German scientists point out, early homo probably depended more on running (and even sprinting) for survival than on lifting heavy objects. In their paper, the authors conclude: "Our data support ESC [European Society of Cardiologists] current guideline that resistance exercise should be complimentary to endurance training rather than a substitute."