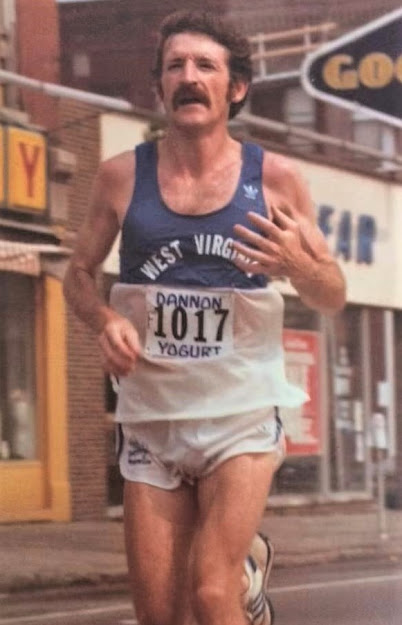 (July, 2020) Carl Hatfield is the one and only of the feudin' Hatfields (and McCoys) to have attained elite U.S. running status, and he had the characteristic thick mustache to prove it. A direct descendant of the Hatfield clan, he says he's proud of his heritage, but we should all understand that "there really wasn't any official law-and-order system in West Virginia back then." (mid-1800s). He adds, "We're much more peaceful these days. Some of the McCoys are among my best friends." Now 73 and still living in his home state, Hatfield qualified for the U.S. Olympic Trials four quadrennia in a row (68-72-76-80), recorded a marathon PR of 2:17:21, won two Cherry Blossom 10 milers, and has completed the Pittsburgh Great Race 10K 43 years in succession. "There's a reason I look the way I do," he likes to joke. "I've traveled a long way, and a lot of the roads were not paved."
Career profession? After graduating from West Virginia U. in 1969 with a masters in guidance and counseling, I worked from 1972 to 1982 for 3 different schools--Alderson Broaddus College, West Virginia University and Salem College in Student Affairs. I also worked in health administration at a psychiatric hospital and nursing homes. I retired in 2012.
How did you get started running and why? In high school, I loved basketball but was a bench warmer, maybe because I stood 5' 8" and weighed 135 pounds. My senior year, the high school decided to start a track team, and I chose to try the two longest events--the half-mile and mile. I just wanted to be a successful athlete at some sport. I placed third in the state meet, and was hooked on running. At WVU, I was a walk-on runner who became their first All-American. 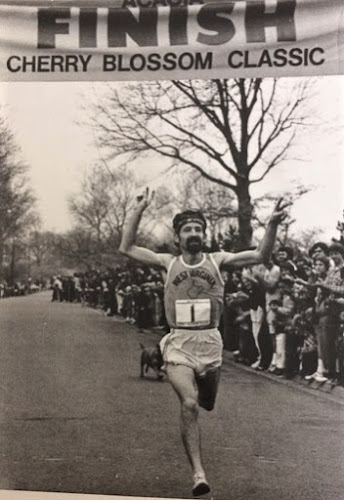 Diet, weight, supplements? My diet has stayed nearly the same over the years although I eat more fruit and vegetables now that I have been diagnosed as a Type-2 Diabetic. I believed I inherited this condition from my mother.

Injuries and other setbacks? I was fortunate to mostly avoid injuries in the first 14 years of my career. I had a bad setback at the 1979 Boston Marathon when I was in the best shape of my life. I went through 10 miles in 48:30 in the top ten. I hit 15 miles in 1:13:30 in sixth place. Then suddenly at around 16 miles, a dog ran out of the crowd at me. I tried to jump over it, as I was in such a rhythm that I couldn't get around the animal. I crashed on the cold wet pavement, hurt my right hip, and suffered a bloody concussion on my head. I was picked up by two drunk spectators and sent back in the race. I went from 6th place to 400th and 2:34:++. It took me 3 months to recover.

In a 2013 5K, I thought I was having indigestion from eating barbecue ribs the night before. This was at 1.5 miles, and I did finish. It turned out that I was actually having a heart attack in the middle of the race. I was taken to the local small hospital, where I got a stent in my right coronary artery. Six weeks later I finished the Great Race 10K in Pittsburgh.

Favorite quotes?  "All Runners at one time or another are beginners"--The New York Road Runners Club Complete Book of Running.

"There's a reason I look like this. I've traveled a long way and a lot of the roads were not paved." --Carl Hatfield

Advice for other lifetime runners?

2--Set a long-term goal that you can work toward.

Life and running philosophy? Running makes you a healthier person. Plato said: "You can discover more about a person in an hour of play than in a year of conversation."