PROFILE--Ian Barnes has been running for 65 years. And he's still winning.

(Oct 2020) Last week Ian Barnes gained at least 15 minutes of fame when a BBC video circulated widely around the Internet. In the video, Barnes, 85, finishes a one-mile track race in England in 8:10--apparently a British record for his age. That's also faster than the American record for an 85-year old. Members of Barnes's club, Darlington Harriers, helped Lifetime Running contact Barnes, and he graciously responded to our questions (in a very understated, British sort of way.) Barnes has become the first lifetime runner to recommend golf for cross-training. He's no softie, though. He's still running 40 to 50 miles a week, and believe in the no pain-no gain philosophy. "The harder you train, the luckier you get," he says.

Career-profession? I was employed  as a  Legal Executive  in the legal profession.

When did you begin running and why? I started running in 1955. The local harriers club was advertising  for new members in the local press. As I had  enjoyed running at school and in the army, I felt I should give it try. That was the beginning of my journey.

How much are you currently training? About 40 to 50 miles a week.

Best races and/or greatest achievements? As a senior athlete, I won medals in the 880 yards and one-mile events in the county championships. I also represented the county in the inter-county cross-country championships.

As a veteran/master athlete, I have won several gold medals in 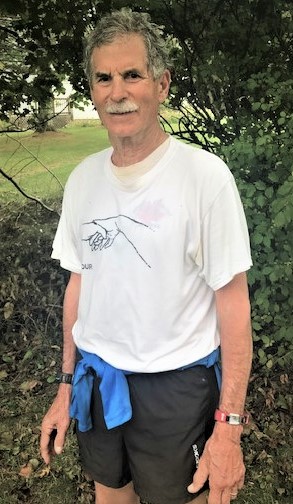 (Oct 2020) Phil Krajewski was born on June 5, 1944--the eve before D-Day in Europe. The Allied forces prevailed the next day, and Krejewski has a strong racing record as well. As he notes below, "I have won just about every marathon I have entered." Indeed there he is atop the 2020 Boston Marathon leaderboard at 3:38:37, more than 30 minutes ahead of the second-place 75-79 runner. Krajewski, 76, from Eastport ME has achieved his success with several interesting approaches, not the least of which is his striving for "Lightness" in his life.
Career-profession? I am a tree farmer and have grown hardwoods, conifers, and shrubs, both native and ornamental species and varieties. I specialized in digging trees for market and have dug over 55,000 trees – by hand – in my lifetime. While this amount may seem staggering, it is very accurate.

When did you start running and why? I always loved running and ran to elementary, junior, and high school on many an occasion but running in high school was not en vogue. In my ‘meat and potatoes’ town a person played football, basketball, and baseball. My wife, Ellen, got me running with her in the early 2000’s when my daughters, Vinca and Evangeline, were 8 and 12 and had joined some local soccer and running programs.

How much did you run in your peak years? I am a minimalist and never have run more than 50 miles in one week.

What were some of your top race performances? I have won just about every marathon I have entered. I have won NYC 3 times and Chicago once. My Waterloo with running is the Boston Marathon as I have never done well there. However, I did finish third in 2016. I have had incremental wins at Boston with some firsts for my age while also beating all older, or runners a year or two younger than me, or being first or high in the US standings.

I believe I will try to continue running until I have the good fortune to win Boston. I am presently ranked #1 in the world by Abbott World Marathon Major rankings for the 75/79 age group.

An estimate of your total lifetime miles? Somewhere in the neighborhood of 20,000 miles

How much are you running and cross-training now? I run about 35 – 40 miles per week. I do not and have never cross trained. My strength training is