PROFILE--Ian Barnes has been running for 65 years. And he's still winning.

(Oct 2020) Last week Ian Barnes gained at least 15 minutes of fame when a BBC video circulated widely around the Internet. In the video, Barnes, 85, finishes a one-mile track race in England in 8:10--apparently a British record for his age. That's also faster than the American record for an 85-year old. Members of Barnes's club, Darlington Harriers, helped Lifetime Running contact Barnes, and he graciously responded to our questions (in a very understated, British sort of way.) Barnes has become the first lifetime runner to recommend golf for cross-training. He's no softie, though. He's still running 40 to 50 miles a week, and believe in the no pain-no gain philosophy. "The harder you train, the luckier you get," he says.

Career-profession? I was employed  as a  Legal Executive  in the legal profession.

When did you begin running and why? I started running in 1955. The local harriers club was advertising  for new members in the local press. As I had  enjoyed running at school and in the army, I felt I should give it try. That was the beginning of my journey.

How much are you currently training? About 40 to 50 miles a week.

Best races and/or greatest achievements? As a senior athlete, I won medals in the 880 yards and one-mile events in the county championships. I also represented the county in the inter-county cross-country championships.

As a veteran/master athlete, I have won several gold medals in

Any particular cross-training? My training is mainly on tracks and on the roads. Before each training session, I do some mobility exercises. Playing golf twice a week is good for the back.

Does it bother you that you are getting slower with age? I have come to terms with the fact that I  can no longer run as fast as younger ones. But as  a master athlete, you find a niche in the 5 year age bands whereby you can race for records or championships medals. 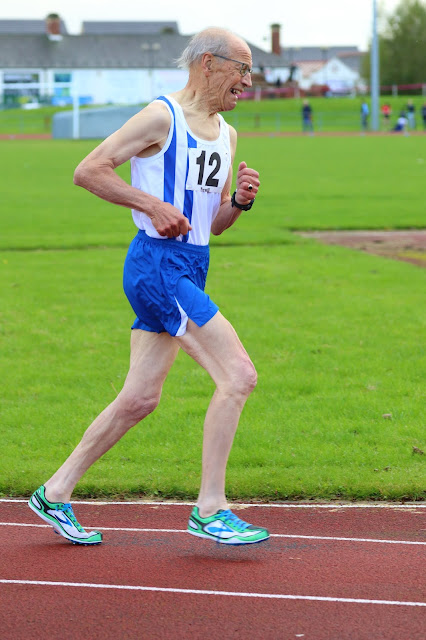 Any dietary or weight changes? My weight is consistent. I have a normal diet without supplements.

A favorite motivational quote? “No pain, no gain. The harder you train, the luckier you get.”

Advice for other hopeful lifetime runners?

1--Stick to a training plan, and remember their are peaks and troughs.

2--Defer any plans to run a marathon until you have fully tested your potential over the shorter distances.

3--Avoid illness and maintain well being.

How has running improved your life? Running has certainly delayed the aging process. I try to avoid long breaks, but also to be patient.