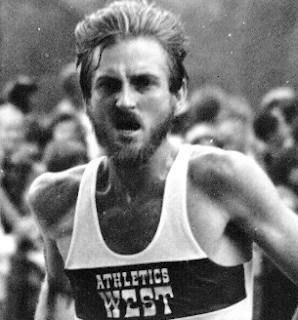 Benji Durden, now 67, has done things in running that few can match. Among them: He placed second in the U.S. Olympic Marathon Trials (in the U.S. boycott year, 1980, so he didn't get to compete in the Olympics), finished third in the Boston Marathon, and has a personal marathon best of 2:09:57. But we're more impressed by something he did last month: He ran a 190-mile training week, his all-time high. (And his wife wasn't far behind him. See below.)

Your professional career? My wife, Amie, and I time running races in and around Boulder, Colorado, where we live. (Occasionally we have timed other things like XC ski races, bike races, etc).

When did you start running and WHY? I wanted to be a competitive athlete. I tried baseball, but the ball speeding by my head (this was before helmets) made me uncomfortable. I didn’t like getting hit when I tried football. I was an okay swimmer, but the early morning practice in a cold pool wasn’t that much fun. Finally, I went out for track and selected the pole vault. I moved to running when I saw a kid break his arm and collarbone when his pole snapped. So in 1965 I became a runner.

Peak running? I ran as much as 140/week for a period, but found my best racing was when I stayed in the 85-95/week range.