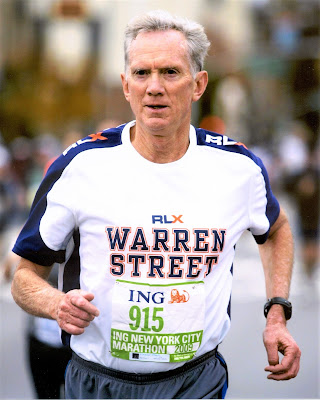 (1-2020) Paul Fetscher passed 100,000 running miles so long ago he doesn't remember when it happened. Never an elite runner, Fetscher has nonetheless done about all you can do in running--from the Great Wall of China to the last 48 straight NYC Marathons. Now 75, the New York City running icon is suffering through only the third running injury of his life--the other two weren't even caused by running--and will bounce back soon. Known for his quips, Fetscher sometimes likes to quote himself. "I'm running the same times I always did, I'm just not covering the same distances."


When and why did you start running? When I entered Carey High School in Franklin Square, NY. I noticed the pretty girls were walking home with the guys with the Varsity Letter jackets. Track was the only individual sport. I started as a long jumper, but my gym teacher said I had to run cross-country if I wanted to do track the next year. Little did I know I would fall in love with distance running. By the end of my first season, I was the #2 runner in my district, and I was hooked.


How much did you run in your peak years, miles/week? In the 1970’s, a 100 mile week was about par. Before the top races, more like 105 – 115 per week. I didn’t count
Read more »
Email ThisBlogThis!Share to TwitterShare to FacebookShare to Pinterest
Labels: profile
Newer Posts Older Posts Home
Subscribe to: Posts (Atom)