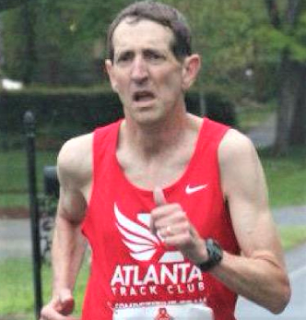 (5-2019) During the 80s decade Randy Stroud sported a Frank Shorter style mustache, wore little red running shorts, and clocked fast times such as a 2:21 at the 1981 Boston Marathon. He’s still fast and still has the same passion for running that he discovered in 1969. He fondly remembers carrying the 1984 Olympic torch as part of a relay team through Atlanta, and his many Peachtree Road Race 10Ks. This July 4th, the 65-year-old will be running his 47th in a row.

Career-profession? After retiring from AT&T/Lucent Technologies in 2001, I became the Facilities Manager at our church. I continue in that role today, and also work part-time at Big Peach Running Company in Kennesaw, Ga. I’ve been married to my high school sweetheart for 44 years.  We have a son and daughter, both married, and they have blessed us with 5 grandchildren.

When and why did you start running? I was a high school sophomore. Exercise was not necessarily a priority growing up.  I did the usual kid stuff including playing organized baseball and high school basketball. Went out for football and decided I was too small, and that fall our high school was starting cross-country for the first time. I made the team and was our number one runner for my sophomore, junior and senior years.  I was also our number one runner in the mile and two-mile during track season for those three years.


Did you have an early inspiration or person who motivated you?  No one in particular, I just enjoyed the training and competition of running.  When I worked for AT&T, I ran with their corporate running team that competed on a national level against other corporations so that motivated me to keep running.When I joined ATC (Atlanta Track Club) I was selected to be a part of their men’s competitive team, Atlanta Track Club Elite. So, maybe I am motivated by competition.

How did you train differently now vs then?  I ran more miles, with more intense training.  Now, I run fewer miles and less intense workouts, but still try to do track workouts once a week. I am currently coached by Andrew Begley from ATC, who works with Atlanta Track Club elite and masters runners.

Has your diet/weight changed through the years?  My weight has not changed much throughout the years. I went vegan about 20 years ago.

Cross Training: I have never really cross trained.  The only time I did was when I had surgery on my right knee. Then I rode the bike until I could start walking and running again.

How important is social running to you. And how are you adapting to slower times? I usually train alone, but on a rare occasion have run with friends. I can adapt to slower times. It’s a matter of knowing what your body can do and as we age recovery is a very important aspect to continued success.

Obstacles along the way:  A micro-fracture on my right knee in April, 2010.  I was unable to run for about one year in order for my knee to completely heal, not knowing if I would be able to run and compete again.  Thankfully, following successful surgery and physical therapy, I was able to return to running.

A favorite quote:  “If you fail to prepare, you have prepared to fail.” Benjamin Franklin

Running philosophy:  Training and consistency are vital to successful running.

What are the biggest lessons (life lessons and running lessons) you have learned? Discipline and consistency are vital to running and living well.

What three tips would you give to a younger runner who wants to run for life?
1--You get out of it what you put into it.
2--Be consistent.
3--Most importantly, enjoy it.

Guesstimate your lifetime miles.  As of May 18, 2019, I have 78,683 documented miles.  My first four years of running I did not keep any log books, so I guesstimate my lifetime running miles to be around 83,000 miles.