PROFILE--Gary Circosta has been running for 43 years 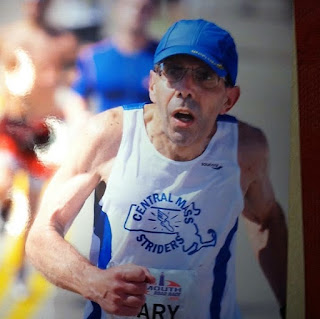 (8-18) Gary Circosta is 71, and has been running for 43 years. Along the way, he has completed
160+ marathons, including a streak of 19 consecutive Bostons at one point. He still works full-time as a dentist, meaning that he must do most of his running in the early morning (4:00 a.m.) He has lived in Massachusetts most of his life.

When and why did you start running?
I officially began running as a self-standing hobby in 1975. At the time I was in the Air Force as a dentist. I had a lot of
free time (those days are gone). I was stationed at Myrtle Beach, that’s as good as it gets. I started with 1.5 miles because you had to pass a fitness test yearly. I literally fell in love with running and the challenge of improving.  I worked up to 10 mile runs before my wife and I moved back to Massachusetts, where we started traveling to road races and enjoying them. The rest is history.

How did your training evolve?
Running evolved slowly for me. In high school, I was a middle linebacker in football. I weighed 185-190 lbs, and did a lot of weight training. I never saw a reason to run more than 50 yards. I needed to run 50 yards very quickly, and I got pretty good at it. However, I realized that I was never going to be a football player in college. My first roommate in college was a cross-country runner. He invited me to do some training runs with the team.

Holy smoke! The first couple of miles were flat, and I was cruising along. Then we took a turn and he pointed to the steepest hill on campus (Mount David). I soon learned the meaning of humility. From there, I evolved into a long distance runner. That was in the days of “LSD” runs, and many articles by Hal Higdon, Joe Henderson, Jim Fixx, etc.  Running became my passion.

What motivated you to keep going?
Those were the days when Amby Burfoot won Boston, Frank Shorter won the Olympics, and Bill Rodgers started winning Boston and New York. Wow, those were great times! However, I never considered running a marathon. I thought that distance was for super humans.

What running accomplishments are you most proud of?
I have what I consider two marathon PR’s. Way back in the early 80’s, my training partners were marathoners. They talked me into running a new, local marathon that was coming up. Back then, not all courses were certified. I’m sure this one was measured by someone driving around in their car.  At any rate, I ran 2:57:08.  I never tried another one until 1996.

What obstacles have you faced along the way?
I don’t want to bore anyone with my health issues, but the fact that I am still alive is testimony to the excellent physical condition that running has given me. I have had two very serious trauma accidents where the ER docs were actually shocked that I made it to the ER alive.

My first accident resulted in severe internal injuries. The attending physicians told my wife there was a 90 percent chance that I would not survive surgery. Obviously, I did. Then they told us I’d probably never be able to work again, and certainly would never run again. But I was back to work in five weeks and running in 10 weeks. I only managed 40 miles of training in the eight weeks before Boston that year, but was able to finish Boston to keep my streak alive.

The second major injury was last March. A fall resulted in severe head trauma, including a concussion and bilateral bleeding on the brain. Again, the ER docs told us that most people don’t even make it alive to the ER with this degree of injury. I had immediate surgery in the hospital, and was told to expect permanent disabilities. They couldn’t predict what, just that I would be in rehab for an indefinite period of time.

To their amazement, I made a complete recovery, and was discharged to go home in three days. However, they told me I absolutely shouldn’t run Boston. I respected their decision. After all, they worked very hard to save my life. However, I am back at full force now and looking forward to the New York City Marathon in November.

What has running given you in life?
My running has provided me with good health, fitness, and stress relief from life in general. I love going to several large marathons every year. I love walking around the expos, going to the seminars, and running with a lot of people. I have had the opportunity to talk with a lot of my idols through the years, and made some really nice friends, not to mention that I have learned a lot more about running.  I eat a fairly healthy diet, very little meat (only when my wife forces me to), some eggs, fish, lots of pasta. Since college, my weight has been a fairly consistent 135 lbs (I wish it  were less, but I’m glad it’s not more!). I drink very little alcohol, usually one celebration beer after a marathon.

Have any other runners inspired you?
Ed Whitlock was a long time inspiration to me. I will never understand how he did what he did! He was always a pleasure to talk with, and lived a wonderful life. A couple of months ago, at the Mount Washington Road Race, George E finished the race again at the age of 98!!!!  Can you believe that??  After the race, at the post-race party, they asked him what he was going to do. He said: “I’m going to talk a nap, and go hiking with my family tomorrow!” As far as I am concerned, that tops it all.


What are your goals moving forward?
Most importantly—to keep running!!! I am also trying to “give back” to the sport for all that I have been given over the years. We have a wonderful club up here, the New England 65+ Running Club, the name says it all.  It is a group of long-time runners (750 members) who still feel like athletes. The social aspect is wonderful, and we basically keep each other “Forever Young”.  I’m not the star runner on the team, but the club treasurer. It has given me a new appreciation for all the effort that race organizers, race directors, and club officers do to keep the sport alive. My advice to everyone is: Keep running, enjoy every moment, live life the best you can, and take care of those around you.