PROFILE--Kenneth Williams has been running for 41 years

(8-18) Hi, I’m Kenneth Williams, from Corinth, MS.  I live in the small town where I was born, within six blocks of the house I grew up in. I have four children and 15 grandchildren, some adopted, some natural, all loved.  Family is important to me.  Our family has been in the same business (Coca-Cola bottler/distributor) for 111 years, and I’ve been with the company for half that time.  I serve as President and CEO.  We believe in working hard and long and giving back to the communities where we live.

Why did you start running?
I went on an international trip in October of 1977.  One of my new friends on the trip had done a very unusual and interesting thing:  He had run a MARATHON!  I couldn’t comprehend 26 miles of running.  Never having run, I didn’t think it possible.  No one in our small city was a runner. But I decided it might be a
fun adventure and a good challenge and so I decided to try to run a marathon. And only one marathon.  One and done. That was my intention, 67 marathons ago!

The next morning after our return from the trip, I pulled on an old swim suit, laced up my Keds, pulled my cotton socks up as high as possible and drove a quarter mile to the overgrown, dirt track at the local high school.  I managed to run two laps. Eleven months later, I ran the 1978 Chicago Marathon in 3:49.

Did you have an early inspiration or person who motivated you?
My earliest inspiration was the guy on the trip that had run a marathon.  Back home I teamed up with a friend, an ex-college football player, a big man that did not have the look of a runner.  Unknown to me, he had a resting heart rate in the 30’s and unlimited endurance, so he was soon head over heels into the crazy notion of running the Chicago Marathon with me.

How much did you run per week in your peak years? Now?
One of the most interesting things about my running has been the training through my 40+ years.  At first, I was determined to run only one marathon per year.  That resulted in me training hard for three months, but just doing maintenance miles the other nine months.  I did that basically for 20 years.  Only when I caught the ‘Boston Bug’ did I start doing multiple marathons a year.  For the last 20 or so years, I’ve run 1400-1500 miles per year.  I’m still doing that.

What were some of your better/memorable races?
BOSTON
In 1990, after attempting for 12 years to get to Boston, I finally qualified on a sweltering Labor Day weekend in Mississippi.  I ran Boston in 1991, and decided one Boston was enough and so I continued to run other exotic marathons around the globe.  By the turn of the century, I was ready to return to Boston and was able to qualify once again.  My second Boston in 2003 began a string of Boston Marathons that continues today.  Current tally: 17 qualifications and finishes, with 16 consecutive.  However, it now appears my qualifying days are in my rear-view mirror.  My hope is to run as a charity runner as long as it’s fun for me.
GREECE
Followed the path of Phiddipides from the Plain of Marathon back to the old stadium in Athens.  Epic!
KILIMANJARO
Ran the Kilimanjaro Marathon on a Sunday. The following day I began the five-day climb up the mountain.  I was 68.
ABBOTT WORLD MAJORS CHALLENGE
I’ve got five of the six World Major Marathons: Boston, New York, Chicago, London, Berlin, but no Tokyo … yet.
COSTA RICA
Crossed the finish line and immediately passed out from heat exhaustion.  The jungle marathon had done me in.   The next thing I remember I was on a gurney in the jungle being attended to by a team of Spanish speaking Costa Rican soldiers.  Running is SO good for you!
70-MILER
To celebrate my 65th birthday, I ran a 24-hour race.  Ran from 3:00p.m. till 8:00am the following morning, covering 70 miles.
400 MILES FOR THE BOYS AND GIRLS CLUB
At 64, I ran a 37-day pre-scheduled run from the Tennessee line down the length of Mississippi to the Gulf Coast.  Covered about 400 miles and raised $112,000 for Boys and Girls Clubs and spoke with 10,000 school kids about the importance of physical fitness.

My Best Effort: I ran two marathons, a month apart, and ran 3:34 in each.  That was within 10 minutes of my personal best marathon time.  I was 66 years old at the time.

Other Memorable runs: Two especially memorable runs occurred in Africa. In one, I was chased by a pack of Wild African Cape Dogs, ferocious hunters.  On another I was required to carry my heavy rifle slung over my shoulder with the following instructions:  “Don’t shoot the elephant, just shoot up in the air to scare him.”

How do you train now? Do you attend coached workouts?
Closing in on 77, I’ve determined that I do better when I train every other day.  I don’t rebound well enough to do a quality workout each day without a break in-between.  I have a young friend that has become my “Accountability Coach” and constantly monitors my progress.   I find that running every other day does help me recover faster. I still run about as many miles per week -an average of 25 a week but during marathon training that bumps up to 45-50. The intensity required now is greater than it was years ago.  But, even working harder now still results in much slower times.

Has your diet changed through the years? I have become more conscious of eating sensibly.  I eat more chicken and fish and less beef.  I try to go low fat for the most part.  But my manta on food is “moderation.”  Moderation in amount and in what I chose to eat.  Less food and more exercise is a good thing.  I weigh four pounds more than I did when I started running 41 years ago.  Through the years, I’ve experimented with extreme diets and seem to always come up weak and with no energy.

Cross Training: I swim and have completed a bucket list item of swimming from Alcatraz Island back to San Francisco (we were ferried out to Alcatraz) and I’ve biked a Century (100 miles).  But I’m not strong in either. One of the big things I learned when I took the Coaching Certification course years ago was, “if you want to be a good runner….run!  I’ve adhered to that.

There are strength exercises that I absolutely must do 3-4 times per week.  These help keep my back and knees working.  Sit ups, pushups, mild upper torso…. just enough to keep my body from rejecting me. I can still knock out 50 pushups and 20 pullups without a problem.  I’m terrible at stretching, and picking up something off the floor calls for an audible gasp.

How important is social running to you? I’m founder and race director of the largest area run (Coke 10k in Corinth) that I started nearly 40 years ago.  So, I guess I’ve been somewhat of a leader in running.  I have been organizing, scheduling and leading a group of local runners every Saturday for more than 25 years, so the social aspect is huge to me.  I love the way age differences disappear in running.  Not long ago I was having breakfast after a run and sitting at a table with three other runners.  I started adding and discovered I was older than all three of the other runners, added together.

One of the most enjoyable parts of my running has been my ‘koaching’ which is “coach” used with the letter of my first name.  I’ve coached probably 300 runners in their quest to run a half or a full marathon, including qualifying for Boston.  I coached via internet and did it for free.  I provide a training plan based on their experience and desired goals and require weekly reports from them.  I was able to coach people from around the world.

I also love to talk to kids about the importance of exercise and keeping themselves fit.  On my run down the state, I was able to speak to approximately 10,000 kids.  I have spoken to many kids attending cross country camps as well as in schools and other venues.  Interestingly, I’ve been able to connect with kids…despite the vast age differences.

Obstacles along the way: 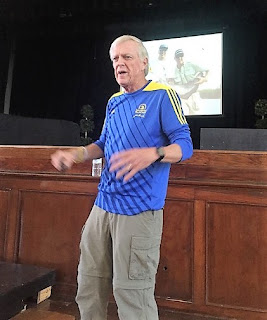 The 10-year-long journey from being a leader of the pack, to the pack, to trailing the pack, to being the slowest runner in the group…. has been most challenging.  It has also been very difficult, emotionally.  I suspect that many aging runners choose to quit running rather than being subjected to watching themselves grow old, stiff and slow.  I recently asked my now grown kids if I was embarrassing them and if I should just give up.  Their answer was that I should keep pushing….that I was inspiring to others….maybe even blazing a path for others coming after me.  I’m not sure about all that.  But, when it ceases to be fun, I’ll hang it up.

“It is not the critic who counts; not the man who points out how the strong man stumbles…..The credit belongs to the man in the arena, whose face is marred by dust and sweat and blood; who strives valiantly; …who at his worst, if he fails, at least fails while daring greatly, so that his place shall never be with those cold and timid souls who know neither victory or defeat.”
Theodore Roosevelt

Running-training philosophy:  I have never returned from a run and said…. “I really wish I had not run today.”  My kids think I’m crazy, but in a good way: Crazy mixed with stubbornness, stamina, determination, perseverance, grit and love for the sport.

How has running helped you with the aging process?
Recently, I read a post written about our running group from the previous Saturday.  The post said, “We had runners present from 10 to 76.”  When I read that, I thought who in the hell is 76 and out running during the dog-days in Mississippi?  Then I realized it was me they were referring to.  So, I suppose that explains how running has helped me with the aging process; I simply don’t think about being old.  I’m just doing the same thing I was doing last year, five years ago, 30 years ago.

Next goal? I’m running the Chicago Marathon in October so that will be number 68, at age 77.