PROFILE--Steve Deboer has been running for 50 years

(8-18) Steve DeBoer is 63 (born: December '54) and lives in Rochester, MN. He is a registered dietitian nutritionist at the Mayo Clinic.  He started running in high school (1968) to get in shape for junior varsity basketball but got cut and decided  “running wasn’t so bad.” In April of 1969, DeBoer started his first streak of daily one-mile or longer runs, which lasted nine months until he sprained his ankle.  Since June 7, 1971 he has run a minimum of one mile every day since.  Currently he is third in line for maintaining the longest running streak in the world according to the US Running Streak Association. His brother and dad were also streakers, so it must “run” in the family.

Why did you start running? To get in shape for JV basketball but got cut from the team. I started running daily April 9, 1969, but a bad ankle sprain February 19, 1970 (at basketball practice, as I did make the team the next year) stopped me for a few days.  Who knows, if there had been a US Running streak association back then, I might have taped the ankle and kept the
streak alive, and my streak would be one month longer than Jon Sutherland’s (who holds the world record for longest streak).

Did you have an early inspiration or person who motivated you?  I’d been running for four years when Frank Shorter won the Olympic marathon (1972). That gave me continued motivation and got me into marathoning.  I actually finished ahead of him in an 8K race in 1999 when he was well past his prime. 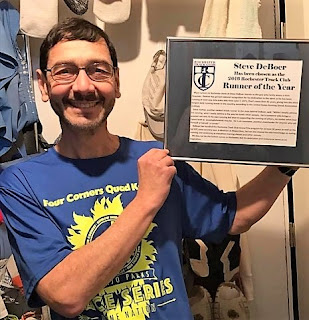 What running goals are you most proud of? I celebrated my 62nd birthday by going to Four Corners, NM, and ran the Quad Keyah Marathons (4 marathons in 4 states in 4 days), first time I have ever run 4 marathons back to back, and finished 3rd overall, first of those age 60 and older. I’m also very proud to have been nominated the 2017 Runner of the Year by my running club, the Rochester Track Club for my long-term commitment to the sport. That was a special night.

A future goal in progress goal is to run over 50,000 miles when the temperature is 32 degrees or lower. Once the temperature goes over 32, I run without a shirt unless there is sleet or strong winds. I’m already over 47,000 for this goal so should reach it in the next two-three years.

How did you train? Daily run before breakfast, long run on weekends. I did some intervals and pickups during runs about once per week during racing season but not during the winters.

How has your weight changed? No change.

Diet through the years? Low saturated fat, high fiber as I have family history of heart disease.

Cross Training: 20 minutes calisthenics before run that includes 100 push-ups. Bike to work 3-4 times/wk 8 months of the year. I stretch before and after running and before going to bed as it helps me stay flexible and avoid/rehab injury.

Social running: Long run on Saturday usually with friends; other days alone, during which I often pray.

Obstacles along the way: Dozens of minor injuries, but was only limited to 1-mile the day of kidney stone surgery (2001) and for the two days following my broken ankle (avulsion fracture 2007) when I stepped in a gopher hole during a trail race. The doctor put me in a walking boot and said weight bearing as tolerated, so I took off the boot, wrapped and taped it and jogged 1 mile the next the days, putting the walking boot back on after running.

A favorite quote:  God willing. (I have been fortunate so far to continue this “addiction”)

Life lesson from running:  Life is not always fun or easy, but it seems easier after a run. Also to always hydrate. I ran my first marathon in high school without taking any fluids and learned my lesson about the importance of hydrating so now I promote hydration in all my presentations.

Running-training philosophy: Take it one day at a time, do what you feel you can do, and sometimes you end up doing some pretty amazing things. I have now done over 1.5 million pushups, was only able to do five when I started as a teenager.

How does running help you on a daily basis?  It’s my on-caffeinated jumpstart to my day; gives me increased energy; better quality sleep; a better attitude; mental health & sharpness;  always ready for other physical challenges; controls weight.

How has running helped you with the aging process? Keeping fit is always a good thing, as I believe it makes me feel younger than my chronological age.

What has running and high-level fitness given you in life? Better quality of life and sense of well being.

Summary: Total mileage since I began running is over 163,000, an average of about 9 ½ miles per day. Jon Sutherland is at 194,000 and Jim Pearson is over 173,000 (the other two streakers ahead of me). I keep a list of streak runners and how many miles they have run in their lifetime. I am aware of at least eight other people who have run more than Jon, but not all their mileage has been while running daily.  Some streak runners also find a lot of money, the most being $9,641 by 63-year-old Craig Davidson who started his streak in 1983.