PROFILE--Joe Henderson has been running for 60 years 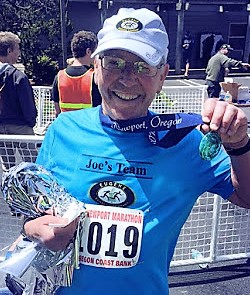 (9-18) Joe Henderson is one of those names that belongs on the short list of people who "launched the running boom." As the first professional editor of Runner's World, Henderson steered the magazine toward all runners--not just the elite. Born in Illinois and raised in Iowa, Joe has always had a midwestern warmth and approachability--both in his personality and his writing. Four decades after leaving his post at RW, and now living in Eugene, OR, Joe continues running-walking, writing, coaching, and spreading his love for running.

Recent birthday? June. Which, of course, means that I recently passed the age-75 milepost. The intended marathon walk/run celebration became half of that, and purely walking. Relieved that a medical issue allowed even this.

Professional career? It’s a loooong story. Briefly, I’ve written about running for nearly the entirety of my running life. Started reporting cross-country for a local newspaper while in high school, 1960… continued writing about the sport for my college paper… then at a statewide newpaper… then at Track & Field News, Runner’s World, Running Magazine and finally Marathon & Beyond. Dozens of books grew out of the magazine work and the running journals I’d kept for six decades – and still do.
When did you start running and WHY? 1958 as a high school freshman, age 14. The wise-guy answer is that I’d failed at everything else – football, basketball, baseball – and track was
my last chance. The better answer: I was made for this sport, where my small size didn’t matter and I wasn’t required to hit or block others. Plus it wasn’t necessary to beat everyone, or anyone, to “win.”

Peak running? There were two of those, where the training was remarkably similar – one in high school (1961) and the other post-college (1968): frequent races as “speedwork” and mainly longer slowish runs in between for recovery and rebuilding. Never was a really high-mileage guy, despite my reputation as Mr. LSD. Usually averaged 50 to 60 miles a week then, and never once topped 100 (not counting a week that began with a marathon and ended with a 50-mile!). 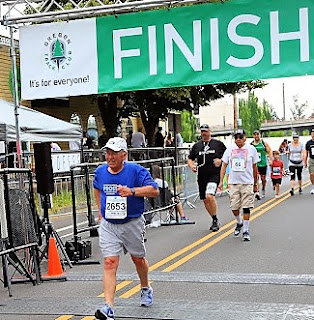 Best races? Two days stand out above more than 700 others. First was my last day of high school track. I won the mile (in PR 4:22.2) and came within less than a second of the then-all-time state record… and later that day, as a notoriously poor doubler previously, I returned to win the half-mile… The other top day: Boston 1967, my first marathon and first cross-country trip (from California). Expected, based on training, to barely squeak under the then-cutoff of 3:30. Ran 2:49:48, which would forever remain my fastest.

Now? Full disclosure: I haven’t run at all since April. During a prolonged urinary episode – finally resulting in a corrective procedure – the pounding caused unpleasant urgency. Walking felt okay, so for these four months I’ve purely walked – at about the same lengths as before, a marathon of miles in a good week, and a long one that peaked at 14. This led to my first three walk-only races.

Recent results? These three were guaranteed PRs, being firsts-ever at differing distances. The most gratifying was a half-marathon on the last possible day in 70-74 group. I was relieved to still go this far (which took as long as marathons did when I’d last run that distance). And surprised to place in my age group, behind both runners but ahead of a few fellow walkers. There are benefits to aging. If you can’t outrace ‘em, outlast ‘em.

Current training? To drop a current buzz word, I do what’s sustainable. Runs, straight ones, especially fast ones, became less and less so as the years added up. Injuries and chronic fatigue mounted. First I added walk breaks as an antidote. Then it became walks with run breaks, which will return as standard practice once the current medical repair work heals. This practice usually very rarely hurts, and usually allows full recovery from one day to the next.

Change in daily training pace? Simply put, that pace is almost exactly double what it was 50 years ago. The eight-minute miles the1960s are the 16s of the 2010s. Stopwatch aside, “easy” feels much the same now as it did then.


Does it bother you that you are slower now? How do you deal with this?
We all slow down eventually. The trick is not to let the old times haunt us. Yesteryear’s results don’t get today’s miles done. The past is a nice place to visit, but we can’t live there.
Prime running weight. Now? Ouch! That’s a tough one to admit. In my fastest years, I hovered around 130. The scales have registered a steady 160 for the past decade.
Diet through the years? No big changes now from practices then. I ate – and eat – pretty much anything and everything (and often too much for my activity level to counteract these days). Worth noting that I never developed a taste for two favorite fuels of runners, coffee and beer.
Supplements? None, much to my supplement-worshipping wife’s dismay.
What injuries or other health issues have you faced through the years? How have you dealt with these? Two were major. The first was a heel injury that gradually ended all running in 1972. Surgery worked so well that I ran a marathon within six months, and the problem has never recurred. The other setback was prostate cancer, diagnosed and treated in 2008. This solved the illness problem, but at a price of lost energy and gained weight. I immediately added two minutes per mile and 10 to 15 pounds, which remain the norms.
Cross training? None. I don’t own a bicycle or a weight set. My first individual sport, swimming, has remained in retirement since the 1950s.
Stretching? Yes, nearly always afterward. If nothing else, it extends the cooldown for extra minutes. In prime years, I never stretched because we’d not yet been sold on the value of these exercises. We warmed up for running by running.

Why do you keep running? In a word, habit. After nearly a lifetime of this, it’s unlikely to change. Even as walking increasingly becomes my mode, the running habits remain intact: same time of day, same course, same clothes and shoes, same watch, same log sheet, similar mileages. Anything else would be abnormal.
Do you consider yourself a social runner or a mostly solitary runner? What are your thoughts on each? In practice, I’m solitary. Ninety-nine-point-nine percent of run/walks are by myself, by choice. That’s because I’m a “social runner” much of the rest of the time. I socialized as a writer and speaker. Still do as a teacher and coach.

What is your philosophy of life, running, and aging? Quoting the quotemeister, George Sheehan: “Do the best you can with what you are given.” And I’d add… for as long as you’re able.
What principles do you follow to maintain your lifetime running habit? Pacing yourself doesn’t just apply to spreading efforts evenly over a whole run or and race. Pacing is a longterm practice. Do nothing this month or year that would jeopardize “finishing” the decades ahead. 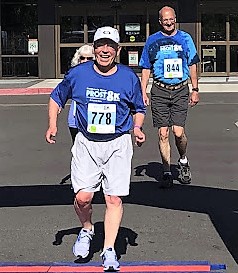 What are the biggest lessons (life lessons and running lessons) you have learned from running? One stands above all: Winning is personal, meeting your own standards, not beating anyone else. This lesson carries over to areas far beyond running.
What do you know now about running/fitness that you didn't know way back when? As a teenager, I couldn’t have imagined going this long and far. “Old” runners then were those who lasted into their 20s. Turns out I was just getting started then – with a seven-decade career,  teens to 70s (six of those including marathons).
How does running & fitness help you on a daily/weekly basis? It long has, and still does, wake me up better than the coffee (that I don’t drink). It’s better mind-uncluttering and thought-producing time than I get at the desk.
It has been said that “aging is not for the faint of heart.” How do you maintain your motivation and optimism? I’ve outlived both my dad (gone at 54) and my brother (63). Both were big fans of the sport, though neither ran as an adult. I feel lucky to have these “bonus years,” and use them partly for the two men who didn’t get them.
Who or what inspires you to continue running and maintaining your fitness? The runners I started coaching for marathons in 2005. I’d imagined myself long retired from this distance then. They convinced me otherwise, which resulted in four more marathon finishes for me. The latest was 2015. Notice I didn’t say “last.”

Favorite quote? This one has to do with making peace between then and now. Old Johnny Kelley, two-time Boston Marathon winner: “It’s not what you once did that really counts. It’s what you keep doing.” He kept at it into his 90s.

For more about Joe Henderson, including his columns and his books, go here.