PROFILE--Mary Harada has been running for 50 years 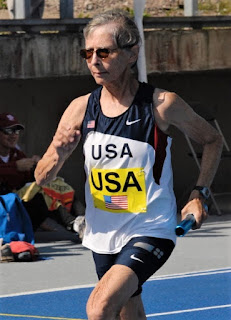 (10-18) Mary Harada grew up in Newton, MA and was always physically active. She played sports in high school, field hockey, basketball and softball. Running was not on her radar.  All that changed when she turned 33 and started to run. Harada, now 83, holds world records in the indoor and outdoor mile (W70), several American records (W70 and W75) in the 3000 and 5000 meter, and is a member of the US Track and Field Masters Hall of Fame.  Her running has taken her around the globe to places such as Finland, Australia, and Spain.  She lives in West Newbury, MA.

She graduated from Boston University Sargent College as a physical therapy major and went on to get her PhD in European History. Post-college, there were no sports available so she played field hockey for Boston Field Hockey - teams were made up mostly of graduates of the seven sisters colleges. “I had limited opportunity for sports until after I finished
graduate school and took up running -mainly because it did not require finding someone to play tennis, or a group for other sports,” says Harada. “Plus I wasn’t very good at field hockey. I could get to the ball quick enough because I had speed but no stick skill. ("Why am I chasing a stupid little ball?”) Her wit, ("If I hadn’t taken up running I would have become an ax murdered), humor and running have made her a fan among her teammates.")

Why did you start running? I started running for exercise in the fall of 1968 when teaching at a college in North Carolina. I followed the Kenneth Cooper book on exercise and was soon running several miles a day six days a week. It was not until the mid 1970’s that I discovered road races. A colleague of mine took me to an informal race at Rick Bayko’s house in Merrimack where the distances were 2,4,6,8,10 miles depending upon the week. Then I joined the North Medford Club and went to the weekly races that club put on. I was one of two women in the club.

OK, the real reason I took up running is because I was playing tennis with my husband to get some exercise. He was pretty decent, I wasn’t.  We just smashed the ball at each other until I called it quits and started running.

Did you have an early inspiration or person who motivated you? I guess that would be my husband. If he weren’t such a bad tennis player I would have stuck with tennis. He wasn’t a runner but was my biggest fan and supporter when I started to get serious about it. We were married for 49 years. He passed away in 2014. When we got married our friends thought that we were not likely to stay married because we had very different personalities – he was very quiet and calm and I’m not!

How much did you run per week in your peak years? Now?
Back in the day I ran 8-to-10 miles a day, six days a week. My highest weekly mileage was 70. After that I was exhausted and said never again! At the time I was teaching full time and had two kids. I ran when they were in day care. As a college professor I could pick my schedule so running was a part of that schedule. It wasn’t easy but I managed. Back then I was running marathons so the weekly miles was high. After six marathons I said enough (five too many).

With age, my weekly averages have slowly dropped to 50 to 40 to 30 miles a week and now in my early 80’s I run every three days (I take two recovery days) and up to 5 miles when I run.  I run on a track or in a park and try to avoid the roads. The bottom line is that now in my 80s I train harder and longer but am still slower.

How did you train differently in your younger years? Do you attend coached workouts?  Until about 5-6 years ago I attended the Liberty AC weekly-coached workouts. I had to stop because of family needs and no longer wish to drive an hour each way into Boston to attend the evening coached workouts. I miss the coached workouts although I have been running long enough to know what I need to do to be ready for cross-country or track races. It is easier to do it with a group - but better to do it alone than not to do it at all.

Note: Liberty AC is the oldest and still all female athletic clubs, founded in 1948. Members have included Joan Benoit Samuelson and Lynn Jennings. 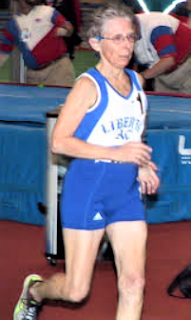 Has your diet/weight changed through the years? I weigh the same now as I did when I was in graduate school - and follow no special diet - except that having been married to a Japanese - we ate more vegetables and rice and meat was not the focus of the meal.  Dessert was not part of the meal.

Harada also comes from a good gene pool. Her mother lived till 90 and her father till 102. “Eighty three isn’t old in our family,” laughs Harada.

Cross Training: Strength train at the gym with weights, ride a stationary bike and use my ERG. I try to exercise every day for at least 30-40 minutes.

Obstacles along the way: Six years ago I fell and broke my right elbow. I call it a “stress” fracture as I just heard the news that my husband had only six months to live. I went out for a run and fell.  After the surgery I lost my balance for some reason and have had to work on that. Back in the 1950s I had knee surgery. At that time the knee was cut open and cartilage was cleaned out. And there was no real rehab like we know today. I was told to put a can on a string and lift it with my leg.

How important is social running to you? If you were/are a competitive runner, can you adapt to the slower times and enjoy a social run? I have a few runner friends who could not adapt to slower times so they quit running. I think that is very sad. We all age. Get over it. I like to pretend I am still competitive but there aren’t many competitors in my age group. The social aspect of being part of the running community is very important to me. I enjoy attending meets around the world and seeing friends. Maybe I see them once a year but we enjoy the camaraderie and catching up. I just returned from the World Masters games in Spain and caught up with many friends.

We dress up in our running shorts and singlets and feel so cool, like we’re not really in our 80s. We can be real with each other.

Running Philosophy: I started to notice changes in my 40s to now my 80s. I try to set new goals for new age groups. One gets slower with age - that is a fact of life and my goal is to try to age more slowly than my competition. Injuries have slowed me down considerably the past few years but I am hopeful to be able to recover and continue to compete.

How has running helped you with the aging process? Running keeps me in pretty good physical and mental condition along. It has been and is an important part of my life. My family loves that I am still active and compete and come to my events when they can.

What are the biggest lessons (life lessons and running lessons) you have learned? As I stated before, I’d probably be an ax murderer if I didn’t run. It’s a huge stress reliever. When I was having a bad day my kids would say, “Mom, go for a run.” When my husband was dying, I used running to deal with his illness and eventual death. Running has given me the tenacity to deal with the setbacks in life and the desire to keep moving forward.