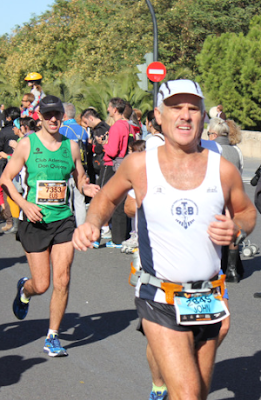 Believe it or not, some doctors and scientists are trying to keep up with us. They’re looking for data and explanations to understand why so many Lifetime Runners enjoy such outstanding health and vigor.

In particular, a group at Ball State University is near the forefront. They are continuing the pioneer work that Dr. David Costill first began there in the 1960s. I was a guinea pig in his lab then. It hurt--a muscle biopsy amounts to a sharp stabbing! And consecutive days of hard, two-hour runs on a treadmills are … just hard.

In a new paper, Scott Trappe and Ball State colleagues investigated the cardiovascular and muscle health of folks just like us. Trappe called them
“lifelong exercisers” because they--mostly runners and cyclists--have been exercising regularly for an average of 52 years. Their average age is 75.

The most interesting part: When the male LLE were subdivided into two smaller groups--the performance-oriented LLE-P (ie, still training hard and racing) vs the fitness oriented LLE-F (mainly exercising for health)--there were several significant differences. There were not enough female subjects to perform a sub-analysis on them. Here are some of the study’s key findings.

1--The LLE subjects had much higher vo2 max scores, and modestly higher max heart rates than the OH.

2--In a similar manner, the LLE-P had significantly higher measures than the LLE-F. In other words, there seemed to be some payoff to training harder and racing.

3--When various biological measures were converted to “physiological age,” the LLE group was about 30 years “younger than” the OH group, even though both had the same actual, chronological age of 75. This was due to lower body fat, lower glucose levels, lower cholesterol, and more.

4--In a similar manner, the LLE-P group had a physiological age about 20 years younger than the LLE-F group, giving them a 35-year-edge over the OH. Again, harder training seemed to deliver a boost.

5--At the muscular level, the LLE members had capillarization and enzyme levels roughly equivalent to the YE 50 years younger than they. The LLE-P members had 25 percent greater capillaries/millimeter-squared than the LLE-F. The researchers wrote: “[This] may provide benefits for athletic performance and skeletal muscle health by enhancing blood flow to the muscle for increased oxygen and substrate delivery.”

Some results from “Cardiovascular and Skeletal Muscle Health with Lifelong Exercise.” Men only; not enough women subjects

Here's a New York Times summary article on the study.