PROFILE--Kirk Larson has been running for 44 years 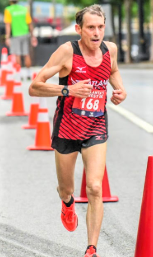 (2-19) Kirk Larson always placed high in the 600-yard walk/run Presidential Fitness Challenge. He was a fast kid, but growing up in Chicago in the 50s, running was just part of the games he played in the streets and sandlots with his buddies. It wasn’t until he turned 60 that he got interested in competing in the USATF masters championships. He has to thank his friend and teammate, Jerry Learned, who was trying to put together an M60+ team for the Atlanta Track Club (ATC) for getting him involved in national competitions. Larson, now 67, and his wife, Susan Gantt, a runner turned swimmer and psychologist, reside in Atlanta, where he manages personal investments when not running with his ATC buddies or competing at USATF championships.

When did you start running and why? January 1975. I was getting my graduate degree at Marquette University and for fun I’d go to the gym and shoot baskets. Afterwards I’d run a few laps around the basketball facility. To be honest, I don’t know what prompted me to start running. I guess I was tapping into the first running boom. I ran two marathons in my late 20s, including a sub-three, but didn’t like it. Too long and too hard on the body.

I started competing for the ATC in my mid-40s. At that time, I would have called myself a good local runner, but ATC had so many great runners I had to work hard to even be on the podium. Although my 5K PR is 16:54, most of my master’s races were in the upper 17 to low 18 range. But I had a blast and loved the camaraderie. Many of the ATC members were running marathons in their 40s and 50s, but I stuck with the shorter distances which I think really saved my legs.  By age 52 or 53, I consistently started to win my age group. Turning 60, I started attending the USATF championship events and loved it. I don’t run many local races anymore, as I prefer the competition of the masters events.

How much did you run per week in your peak years? Now? At my peak I ran 35 to 45 miles per week. For a long time now, it has been 25 to 35 miles, and part of that includes focused speed workouts, hills, and form drills.

What were some of your better/memorable races?
Hood to Coast 2002. Mike Anderson and I captained an ATC team.  We won masters with a team averaging over 48 years of age, were 10th overall, and averaged 5:56 per mile for the 196 miles.

Since turning 60, I have been part of 15 national championship teams at USATF Masters GP races, running for the ATC. We won the M60+ team GP in 2018. 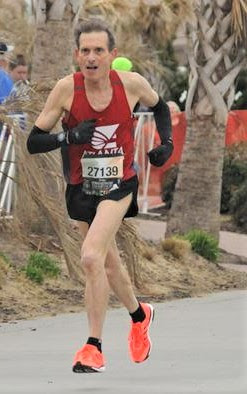 Individually, I have won a national championship, 5 silver and 7 bronze medals.The national championship was in August 2018 in my hometown, Atlanta, and my teammates and competitors at the award ceremony treated me to a standing ovation.That was a moment I will long remember!

How did you train differently from your younger years? Mileage was not that much different, but I do more focused workouts now, partially thanks to some great advice from Pete Magill. I’ve stayed consistent with five days a week for much of my running career. I do more tapering going into a race and get more recovery after. Rest is critical for us senior runners.

Has your diet changed through the years? I haven’t eaten red meat since 1974 and have been a vegetarian since 1990, although recently I have added wild caught salmon back into my diet. In general, my diet is pretty healthy and has been consistent much of my adult life. My weight hasn’t varied more than a pound or two since college.

Cross Training: I don’t cross train in terms of cardio-vascular exercise. However, I spend huge amounts of time with flexibility and strength work (including Redcord). Meeting Aaron Mattes when I was in my late 30s and becoming very proficient in Active-Isolated Stretching and Strengthening has been a huge part of what has kept me running so well into my late 60s. I had a gym membership but gave it up a few years ago. Now I do all my stretching and strength work at home. I’ll do 45 minutes to an hour most every day.

How important is social running to you? If you were/are a competitive runner, can you adapt to the slower times? I love the great friends from around the country I have made at USATF championship races and being part of ATC. Running with the best keeps me motivated and on my toes. I’d rather have my butt get kicked by the best in the country than dominate in a local race.

I have adapted to slower times and am very proud of the fact that I have slowed “gracefully.” I went from many years of being a good local runner, to someone age-grading consistently in the mid 80th-percentile range because I slowed down less than the tables would predict.

A favorite quote: “In every race there is a crucial moment when the body wants to quit. Then it takes imagination and mental tenacity to survive the crisis. Otherwise, the penalty is defeat.”--Derek Ibbotson 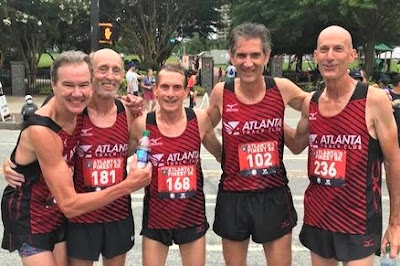 Has running helped you with the aging process?  Absolutely. I think it has helped me feel, act, move and look younger than my years would indicate. I rarely get sick and I think my good fitness is the reason for that.

What three tips would you give a younger runner who wants to be a lifetime runner?
1--Don’t over-train, and only do the type of racing that you want to do. You can still train hard at 50 and up, but be smart about it.
2--Pay attention to diet, flexibility and strength work early on. It will pay big dividends as you get older.
3--As you age, set a goal to slow down less than your competitors, and less than the age-graded tables predict.

What are the biggest lessons you have learned from running? Running has helped me stay physically and mentally fit; has been the source of developing many good friends; and, has given me a huge sense of accomplishment.  I also met my lovely wife through running.
Email ThisBlogThis!Share to TwitterShare to FacebookShare to Pinterest
Labels: profile
Newer Post Older Post Home