PROFILE--Jimmy Green ran the 1956 Boston Marathon. What were you doing then? 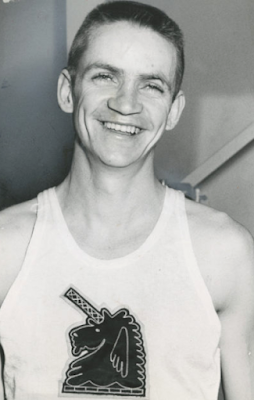 (4-19) James (Jimmy) Green ran his first miles in 1949, and his first Boston Marathon in 1956. There's probably no active marathoner anywhere who ran Boston earlier than Green's first. Four years later, he placed third at Boston in 2:23:37. He thought he had completed his last Boston in 1997, but the necessity of making a positive, life-enhancing statement in 2014 carried him back to Hopkinton once again. Now 86 and living in Marblehead MA, Green finished Boston in 2014, 2015, and 2017. And, given his steady 25 miles per week, he thought about it again this year. But life got in the way.

Your career/profession? Teacher, tech writer, Russian intercept operator during ’56 Hungarian uprising (exciting). I was an English major in college, and taught for many years at Saugus High School in Massachusetts. In 1972, I got a PhD in foreign affairs from American University, with a minor concentration in Russian language and studies.

When did you start running and why? A close friend, captain of the cross-country team, introduced me to the game. That was in 1949 at Quincy High School in Massachusetts.

How much did you run in your peak years? I never exceeded 3,000 miles in a single year. During my best year of training and racing before running 2:23 at Boston, I averaged 78 miles a week during the winter buildup, taking off Mondays. The other six days, I ran a 13-mile course each day, alternating hard days and easy days. I did less training the rest of the year after Boston and none in December.

I was the first alternate on the 1960 and 1964 Olympic marathon teams. In 1960, I finished 2nd in the Milk Run in NYC 4 days before the Olympic Team left for Rome. Johnny Kelley beat me by 1:45 but I beat the other two Olympians--Alex Breckenridge and Gordon Mackenzie by over three minutes.

In 1959 I placed 2nd in the PanAm marathon (behind Kelley), followed 26 days later with a 4th in the First International Marathon in Seoul, Korea.

Training? I had no clear- cut plan. My program evolved. In 1959 and 1960, I ran mostly 13-mile workouts (at 5:50 pace one day, 6:50 the next) with Mondays off. I describe this training as internecine, because the JG (me) of one week tried to surpass or equal the times set by the JG of the previous week, month, or year on the same course, same distance.

During cold winter weather, I often ran with 3 or 4 tops and 2 layers of sweat pants. I ran alone 95% of the time because I was the only runner in town. I believe that running to the limit alone against the clock, 3 times a week, 13 miles on average, wearing layers of clothing in winter, heavier training shoes, in every kind of weather produced a strong foundation for consistent results. 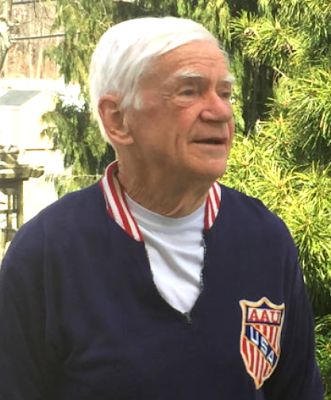 How much cross training did you do? I did occasional sets of 35 pushups but irregularly. When injured in ‘61, I did 15 sets of 35 pushups and followed each of those with sets of 10 pullups, wrists out. The total workout time was about 70 minutes for 725 pushups and 150 pullups. Most of them, I think, legitimate. I did no stretching and thus had numerous hamstring pulls often during the weeks preceding the BAA Marathon.

In the first story from my book "Tales of Boston Harbor," I describe my clam digging days in high school. There are few experiences that can equal the physical, psychological, and almost spiritual demands of the work. It was a marvelous preparation for competition. No foe is more relentless than an incoming tide, none more unforgiving.

Current training? I'm getting in about 25 miles a week. Until a month ago I thought of running Boston again this year. But then I needed cataract surgery, and a few other things came up.

How do you maintain motivation against the inevitable slowing? I always time myself and compare current times with past ones over the same course, or on the track.  This approach keeps me motivated

Diet and weight changes? Little change except I take on average 2 Ibuprofen daily before training and one at bedtime. With a wife, who is an excellent cook, I have always eaten well.

What injuries or other health issues have you faced through the years? Hamstring pulls before 5 different Boston Marathons between 1959 and 1968. And a heart attack after the 2017 Boston. I finished in a little over 6 hours and went to a nearby cafe for a coffee with my wife. The next thing I remember is that I was stretched out on the floor. They took me across the street to the marathon medical tent. I was then sent to Mass General, where an excellent cardiac surgeon was working. He put in a stent, and I was out of the hospital in a couple of days.

A favorite inspirational quote or two? From The Plague, by Albert Camus: …we all carry it within us, the plague, because it has left no one—no, not one single person in
the world— untouched. And one must remain perpetually vigilant over oneself in order not, in a moment of distraction, to find oneself breathing into another’s face, foisting the infection on him. It’s the bacterium that’s natural. Everything else, health, wholeness—purity, if you will—is the product of will, and of a will that must never slacken. The honorable man, the man who infects almost no one, is he who has the fewest possible distractions. And what will it take, and what
effort, never to be distracted!

From Macbeth,
Tomorrow, and tomorrow, and tomorrow,
Creeps in this petty pace from day to day,
To the last syllable of recorded time;
And all our yesterdays have lighted fools
The way to dusty death. Out, out, brief candle!
Life's but a walking shadow, a poor player
That struts and frets his hour upon the stage
And then is heard no more. It is a tale
Told by an idiot, full of sound and fury
Signifying nothing.
Philosophy of running and life? A friend and former Canadian great, Gordon Dickson, now deceased, used to run with a group that would spontaneously make fun of their efforts. During workouts, they might recite: "Over hill, over dale... Keep a goin'." Or: "Through the mountain pass... Keep a goin." The last phrase became their refrain, used with endless improvisations. It reflected their dark musings about runners endlessly in training like Sisyphus forever pushing the rock uphill. Our labors are absurd, yes. Gordy had it right. Yet we must try, we fight on.