PROFILE--Now 82, Libby James has been running for 48 years 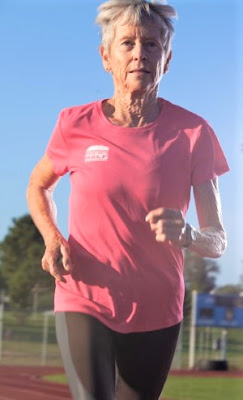 Your career/profession? I’ve had a checkered career that includes 15 years working with single teen mothers to help them get GEDs and jobs. I’ve edited local magazines and done lots of freelance writing. Currently I write regularly for the North Forty News based in Fort Collins. I’ve published five books, three for young people, one on running and one that grew out of my experience living in
Mozambique for a year. I also have a small notecard business.

I live in Fort Collins, Colorado, my home for more than 50 years. Before that I was all over the place—born in UK and lived in New York, Washington DC, Seattle, Philadelphia and Boulder. I have a lot of accents!

When did you start running and why? I have four kids all born between 1959 and 1964. In 1971 when I was 35, I began running a mile early every morning in order to preserve my mental health. In 1976 I entered my first race (a 10K) at age 40. There were few women 40 and over in those days, and I discovered a competitive spark that I never knew I had. In 1978 I signed up for the Denver Marathon just because running that distance seemed so impossible. I wanted to see if I could do it. My time was around 3:48.

How much did you run in your peak years? The most I ever ran in a week was 68 miles, in preparation for a marathon.  For many years I ran between 45 and 50 miles a week. I hit 2,000 miles for several years, but these days I shoot for a combination of running and walking to equal 100 miles a month.

Top race performances, or running achievements you are most proud of? My all-time favorite race is the Bolder Boulder, which I’ve done almost every year since its inception in 1979. My fastest Bolder Boulder time was 43 minutes somewhere in the 1980s. The first time I got noticed was for a 48-minute run when I was 73.

My fastest marathon was 3:24 when I was 47 in 1983. Peak experiences are running the Tokyo Marathon with my son in 2012 in a slow time of 4:29 and setting a then-age-group record at the Disney Half in 2013 in 1:45 with another son cheering me on. Both my daughters are long-time runners and veterans of marathons. Most of my grand kids run, to me an important legacy they have inherited from their parents and grandmother. Don’t get me started talking about how proud I am of them!

How much are you running and cross-training now? Strength work? Stretching? I typically run between four and six miles every other day and walk on the no-run days in hopes of hanging in there for as long as I can. I can still run 10 miles in a pinch. I haven’t done a half-marathon in three years, though I haven’t given up hope.For 10 years I led bicycle trips in Vermont and Colorado, and I still love to bike. These spring days I’m identifying gardening, especially dandelion-digging, as cross-training activities.

Does it bother you that you are slower now? I don’t have a problem with getting slower though I’m sometimes surprised at how slow I am. I'm only competitive in my age group, which has dwindled to almost no one else. At the Shamrock 8k masters championship in Virginia Beach last year, I was the only 80-plus woman. I did manage to beat the two men in that category, and I have to admit that was a kick!

How has your diet and weight changed through the years? Medications, supplements?
My diet has not changed much over time. I enjoy chicken and fish, eat only a little red meat, and emphasize fruits and veggies. I indulge in chocolate, frequently but in small amounts. I weigh under 100 pounds, a bit less than when I was younger. I like to have a small glass of wine at night. I take glucosamine, fish oil, calcium, and a multivitamin, just for good measure.

Injuries: I’ve been fortunate re injuries. A couple of bouts with Achilles tendinitis is all I can claim.

Inspirational quote? Not to embarrass him, but Amby’s: “I have learned that there is no failure in running or in life, as long as you keep moving.” And mine: “I’m never sorry I went.”

Three tips for lifetime running? I’m not good at giving advice but I’d encourage those starting to run to mark out a mile course and taking it easy, run as far as you can, then walk the rest of the way. Soon you’ll be running the whole mile and if you can one do one mile, then you are at risk of becoming addicted.

What are the biggest lessons you have learned from running? The older you get, the more important it is to be consistent. You are capable of more than you think you are. Don’t stop because it hurts a little, the pain is likely to depart before the run is finished.

How does running & fitness improve your life on a daily/weekly basis? Running is not my whole life, but it has enhanced it in so many ways from travel, to meeting people, to having a passion to share with family members, to staying in shape and to providing comfort and relief, especially during tough times. While I do most of my running alone, I treasure weekly runs with a good friend and any opportunities I have to run with kids and grand kids. I highly recommend it!