PROFILE--Harry Carter has been running for 55 years, is winning races at 82 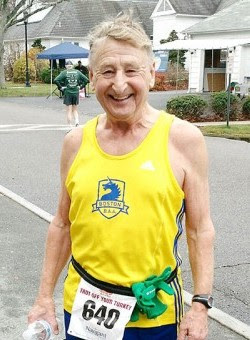 (6-2019) Harry Carter spent his early childhood in London in the mid-1930s, and recalls walking to school with a gas mask, a precaution from events of WW1. Eventually he immigrated to the United States (MA) and got serious about his running at 57 after dabbling in it in his 20s. He ran his first marathon at 60 in 3:38. At 82, Carter is still a serious age-group threat and contender at races from the 5K to the marathon. Short and stocky with a wide smile, Carter is having a good time, and posting great times, in his senior years. (Additional bio details at end of interview.)

Profession/Career? I was trained as a mechanical engineer. On finishing school in 1952 I got an apprenticeship subsidized by the British Government.  The program no longer exists but it was designed to fill the lost manpower caused by WWII.

When did you start running and why? On arriving in the US I took up in quick succession: camping, hiking,
backpacking, and downhill skiing. But it wasn’t until I was 57 that a work friend talked me into running.


I always resisted until one day I was out on a walk and decided to break into a slow jog that ended up lasting for 2 1/2 miles. This was mainly to be able to say to him on Monday morning, “There I did it.” Then he talked me into a 5-mile race. Although I don’t remember my time, my friend was sufficiently impressed to jokingly remark, “I can’t wait to see what you do when you reach 60.” That’s about the time I was hooked.

How much did you run during your peak years? As a younger person I did one year of 80+ miles. Now, I run 5 to 6 days a week. Currently I train for a marathon working up to about 60 miles a week and maximum long runs of 20 to 23.

Top races or running achievements? My first marathon was at 60 from Narragansett to Warwick, RI, where I managed a 3:28:27. Speaking of marathons I have only done a dozen or so in all, mostly Boston (about 4) or London (3).  In May I ran the James Joyce Ramble 10K, a USATF Masters Championship, in 55:59.  Other favorite runs: New Bedford Half, Foxboro 10-miler, Boston tune-up 15K, CVS Downtown 5K. There are many more out there I love but just too many to mention.

Current running, cross-training, stretching, strength work, etc?  My 1st choice would be swimming for up to as much as an hour by which time I’m bored and have to get out. A few years ago I saw a sports doctor as my times were slowing, and he said I have no range of motion and needed to start stretching this, this, and that. So now I am very rigorous of that sort of stuff. The trouble is, at my age, I have to do it with the aid of sitting on the edge of a bed, doing one side at a time. I always make sure I exercise a half hour before I leave the house, and I try to stretch a little bit when I get back. I also do yoga.

Dietary and weight changes? Supplements?  The one thing I find troublesome is keeping the weight off. I am 15 lbs more than I was 10 to 15 years ago and have a hard time trying to keep 2 to 5 lbs off, but then that is probably just me.

Do you prefer social running or solo running?  I love being out with people. Sometimes I’ll run on my own and enjoy the quietness, but I also enjoy a great conversation while running with a friend. The time just flies. And it’s easier to train for longer runs with a buddy. I belong to four running clubs, the Rhode Island Road Runners (RIRR), Wampanoag Road Runners, New England Over-65 Club, and the Boston Athletic Association. So I guess I do enjoy social running! I’ve been known to cook up a great breakfast for my buddies after a long run. I was inducted into the Hall of Fame for New England 65s in 2010 and the RIRR in 2014. 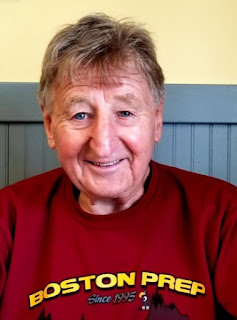 Injuries and/or health issues? No serious injuries, just some aggravation from time to time. It's always put right by some serious stretching, and the older you get, the more true this is.

Favorite quote? If you don’t enjoy something, find something else to do.

How does running & fitness improve your life? Running for me is all about the people and friends you make along the way. This is priceless, and the older you get, the more true important it is. Running may well be a sport unlike any other in that regard. Though you can’t escape old age completely, running helps to stem it. At this point in my life, I’ve always felt like a 30-year-old or a 40-year old, so I just keep going.

What's your philosophy of life, aging, and running? If you feel like doing something, forget about age, and just do it!  Never give up anything you want to do. For example, I always wanted to fly, and at age 64 I noticed a sign on the side of the road advertising, “try a free flying lesson” at Hopedale airport in MA. I did it and a year later I had my pilots’ license, and was flying all over the east coast area north and south. I made new pilot friends.  Also, at 68 I decided I would like to swim properly with the goal of doing a triathlon maybe. I never did the triathlon, but I swim laps for an hour from time to time. It's a great way to exercise a body that's stiff from too much running.

More biographical background: I was born in London in 1936 a couple of years before WWII and have many memories of the war years. We lived in terraced houses and in those days everyone in my neighborhood was poor.

My father got paid about 2 pounds a week but then, at 20 shillings to the pound, rent I remember was 2 shillings a week.

Later as a school kid we walked to school and carried a gas mask, a precaution from events off WW1, but never had to use them and in fact a couple of years later this Idea was dropped.   Our playground was the bombed out buildings that surrounded us and to build “camps” with the bricks to play in.

Finally around 1944 after the V1 followed by the V2 rockets, one of which one Saturday morning destroyed half my street, which was no longer than about 2 football pitches they decided to evacuate me about 150 miles North of London for about 6 months till the raids had stopped. I mention all this because at the age I am now, I can’t help thinking what an unusual childhood it turned out to be.

Now about running.  I was called up for national service at 18 and was assigned to an Infantry Regiment and sent for training for 10 week. Then I was sent by troop ship to Malaysia for the remainder of my 2 years, a sea journey that lasted 3 weeks and became another unique experience for me. But it was the bit in the training that caught my attention the most.

We were told that towards the end of the training we were to do a 5-mile cross- country run and the thought of that bothered me, as I just could not imagine being able to that.

Well I did and came in among the top 3 out of a total of about 64 men.   It was a surprise for me but all I remember was I so glad it was over and never wanted to do that again.

I came out of the services a very different person, I am told and some years later had the urge to go abroad again so having just got married at 29 we decided to go to Australia. About 3 weeks before we were about to sail to my new job, my eye caught sight of an advert in the London press, for my skills (mechanical engineering) in the USA. I reasoned that would be much easier getting back and forth to UK, a thought that had not crossed my mind till then, so I took it.

I tell all this because I believe my army experiences shaped me for a healthy outdoor future life.
Email ThisBlogThis!Share to TwitterShare to FacebookShare to Pinterest
Labels: profile
Newer Post Older Post Home