PROFILE--Phil Stewart has been running for 52 years

(July 2019) Phil Stewart has had a highly respected national running presence for more than 40 years as a sub-2:20 marathoner, writer, publisher, race director, and road-race management expert. Currently he is director of the Cherry Blossom Ten Mile and publisher of Road Race Management newsletter. Stewart's running career has had more than the usual ups and downs, as has his weight. His personal story--returning to more consistent running and fitness when he reached his early 60s--serves testimony to the "it's never too late" approach. Stewart, now 69, is the first Lifetime Runner to express some apprehension that his cardiac health could outlast his brain health. We give him credit for his candor.

Your career/profession? I have been fortunate to have been able to carve out a career entirely in the running industry. I was one of the three founders of Running Times magazine in 1977, started Road Race Management as a spin off in 1982 (which I purchased when I left Running Times in 1986), and started directing the Cherry Blossom Ten Mile in 1991.

When did you start running and why? I started running to get into shape
to play tennis my junior year in high school. My father wanted me to be a tennis player. I had more success at running so I dropped the competitive tennis and kept on running. . .

Peak running? Relative to my peers in the 1970s, my mileage was on the low side, generally in the 80-90 mpw range. I never really got into twice a day training which most top runners did when they pushed their mileage into the 130-140 mpw range. However, I ran nearly all of my miles hard -- six minute pace on my continuous runs every day. This enabled me to get by on less mileage but also, in my opinion, caused me to break down with the injuries that ended my nationally competitive career in 1977.

Top running achievements? Breaking 2:20:00 (2:19:58) in the 1975 Boston Marathon was definitely the highlight. This qualified me for the 1976 Olympic Trials Marathon. Finishing 15th on a warm day in the 1977 Boston Marathon (2:22:00). Finishing third in the 1974 National 50 Mile Championship in Central Park. Placing 12th in the 1974 London to Brighton Race. After years of injuries and raising a family, running 3:40:29 in the 2014 Berlin Marathon was immensely satisfying. Also completing the JFK 50 Mile in 2017. I learned after the fact that my 43 year span between my first ultra-marathon in 1974 and my most recent in 2017 placed me 6th on the U.S. list (kept by Nick Marshall) of the longest 50 mile time spans. Being inducted into the RRCA Hall of Fame was a great honor as well.

Current training? I bike/spin more than I run these days -- 3 days a week running and 4 days a week spinning or cycling. In recent years, I have averaged about 1500 miles per year running and about 5,000 miles a year spinning or cycling. I have run all of my recent marathons on this schedule. The three days a week running include one day of "speed" work (using the term loosely), one long run (working up to 23 miles before a marathon) and one day of a continuous run of 10 miles. I rarely run less than 10 miles on any run. Unfortunately, I do little stretching or strength work, something I vow always to start doing but never getting around to. 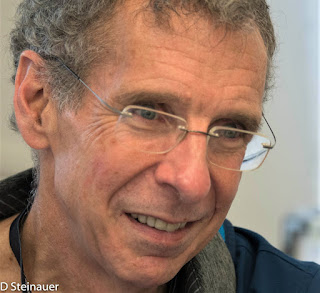 Does it bother you that you are slower now? It does bother me, but I have to deal with it. I am thinking about retiring from marathon running, possibly after what will be my 25th Boston Marathon in 2020 (and my first as a 70-year-old which would mean I would be able to say I ran it in my 20s, 30s, 40s, 50s, 60s and 70s). [This is assuming my 4:18:04 from NYC gets me in. It is perilously close to the 4:20:00 qualifying time for 70-75.] I am inspired by the fact that I can still get out there and train when so many of my peers are no longer able to do so. I remind myself of that fact when I get discouraged by my slowing-down times.

Diet and weight changes? I have had quite a variation in my weight. During my competitive career, I weighed between 125 and 130 pounds. During my injury and raising kids period, my weight gradually crept up to 185-190 pounds (once after a large meal, I weighed 201 pounds!). Starting around 2011, when I took up cycling and my running became more regular, my weight started to drop signficantly to the point where I am usually now at around 140-145 pounds. I enjoy eating so I need to keep my training volume high or I would start the creep back up. The only supplements I take are B12 and D3. I am on blood thinners for life after a pulmonary embolism and two DVTs in 2008. Apparently I have a genetic mutation which makes me suseptible to clotting.

Injuries and health issues through the years? Almost every one in the book, except for never a serious Achilles injury (I am knocking on wood as write this.) The most serious were ostietis pubis or three fractures of my pubic symphasis, which ended my competitive career in 1977, (I did virtually no running for two years in the aftermath of this injury) and dystonia around 2010 which got me into the same NIH Study as Ben Beach). I still deal with the shuffling stride brought on by the dystonia. The major health issue was the pulmonary embolism and DVTs mentioned above. I have had one of my knees scoped.

Short tips for hopeful lifetime runners? I think the introduction of cross training in the form of cycling and spinning has enabled me to extend my career. I am only subjecting my body to the pounding of running three days a week, but am obtaining decent race results with this routine.

How does running & fitness improve your life on a daily/weekly basis? The mental benefits (endorphins) are huge in my outlook on life. Maintaining my weight and overall fitness are important. When satisfying times (whatever they are at the moment) come, they make me glow. I do worry a bit about what might happen if my heart, made strong with all of this training, outlasts my mind. I fear this could result in my heart beating on long after my mind is gone which is not a way I would want to live.

Biggest life lessons learned from running? The value of working hard towards a goal; the benefits of cardiovascular fitness; dealing with the highs of running well and the lows of injury; resiliency in coming back from injury; accepting the increasing limitations that come with aging.
Email ThisBlogThis!Share to TwitterShare to FacebookShare to Pinterest
Labels: profile
Newer Post Older Post Home