(Sept. 2019) Chuck Milliman is not your average octogenarian. In fact, he’s probably not your average anything. On his 78th birthday he ran 78 miles. That was so much fun that he ran 80 miles on his 80th birthday, and this year ran 85 miles on his 85th birthday.  When he’s not running, he practices the pole vault in his backyard pit that he built with his son. A retired pastor from Sequim, WA, Milliman sometimes imagines what the geese and deer on his favorite loop are saying the umpteenth time he passes: “There he goes again, what a handsome man!”

Career/profession: After graduating high school in 1951 I took on odd jobs: construction worker, butcher, laying railroad ties, nothing took hold so I signed up for a college correspondence course in electronics, which ultimately led to a job with Boeing in Seattle, where I worked for five years. Along the way I married Shirley and
had three kids.
In 1963, I enrolled in Warner Pacific College, a Christian liberal arts school in Portland, and was ordained in 1970, then was acting pastor at 4 different churches and retired in 1999.

When and why did you start running? I started running in 1973 with the crazy idea to run a marathon with my sons. We were all avid hikers and one day while out on Mt. Hood I met an old guy (probably 60 at the time) who mentioned he runs marathons. I thought if this old guy can do it, I can. I was 40 at the time.

My sons and I signed up for the 1973 Trails End Marathon in Seaside, Oregon.  Despite all the training, by mile 20 I was crying like a baby, cursing myself for signing up. I swore I would never do this again as I crossed the finish line in 3:59. The following morning, somewhat recovered, I became elated with my accomplishment and read a proverb from the Bible: “Weeping happens at night, Joy cometh in the morning.”

How much did you run in your peak years?  Into my 70s I ran three marathons a year and countless other 10Ks. 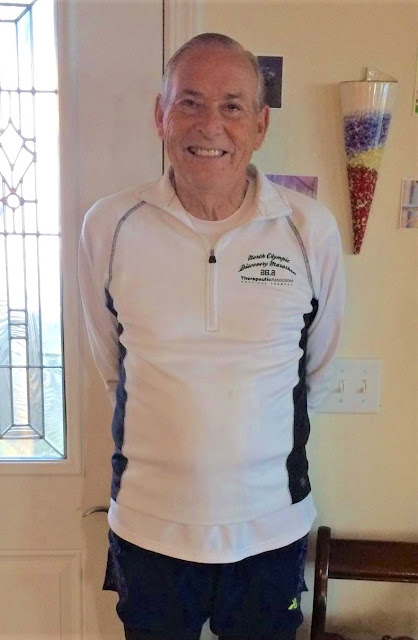 Best performances or achievements? That would have to be my crazy birthday challenges--running my age in miles. When I ran 85 miles on my 85 birthday, it took 35 hours and 35 minutes. To last that long I trained to prepare my body and my mind for that long stretch of time. My marathon PR is 3:26.

And I am very proud of the fact that I have run marathons with my wife, my two sons, my daughter and son-in-law, my granddaughter and daughter-in-law.

Injuries/obstacles along the way? In 2001 at age 69 I underwent heart bypass surgery to correct two arteries that were 95 percent blocked. I didn’t run another marathon till 2007. But I always tell folks that the surgery wasn’t related to running, so I don’t count it as an injury. Then there was that hernia surgery in 2014. While recovering from that I signed up for a 50K trail run.

I haven’t been to a doctor in years, probably due to my Depression era mentality. Who has the time or money to go a doctor? I credit my injury-free running with not obsessing about time or distance. I just like to have fun with my running and truly believe that by surrounding myself with family and friends who run with me, that I don’t get any injuries. We are having too much fun.

I don’t stretch or cross train and don’t even ask me about massages or gym memberships. A waste of time and money. Why go to a gym when I can hike and ride a bike in the beautiful Washington mountains?

Are you bothered getting older and slower? No, it comes with age. During my 50s and 60s I felt fit and strong and had stiff competition throughout the decade. In my 70s I noticed the competition dropping off but some were still strong and fighting to the finish. The 80s showed a severe drop, not only in numbers of competitors but pace and agility. And now at 86, I struggle to keep a 15:00 minute pace. But, I’m still out there and feel great. After 64 marathons I have nothing more to prove.

As long as my body can stay upright I’ll compete. I do not run because I must. I do not run for other people.  I run because I can. I run for the sheer enjoyment of being able to run. And I thank God every day for my health and that I can still run.

Has your diet changed? I eat whatever Shirley makes me, which is usually oatmeal for breakfast, a peanut butter and jelly sandwich for lunch, and whatever she has in the refrigerator for dinner. My diet has not changed over the years.

A favorite running quote?  “I don’t run because I have to, I run because I can!” I do not recall where I read this but it was many years ago and it is still my favorite.

Three tips for other prospective lifetime runners? My advice to those who are just starting out to run or do any exercise to become fit is to start out slow and do workouts every other day in very small intervals for a couple of months. Always take Sunday or the day you wish off. The body will then adjust to the exercise.  Keeping fit is as important to our overall health as anything that we can do to live a long and enjoyable life.

What has running contributed to your life and the aging process?   I believe that running has helped me very much in the aging process. At 86 and soon to be 87 I can still do jogging, hiking, gardening and cut my own wood for the winter. Still think clearly, but that might be debated. Have good vision. And am in great health.

You won’t find me in a rocking chair any time soon. I simply don’t think like an old man.

Running has helped me to know that when I face a difficult task in life, I can tough it out until the problem is solved. I have been learning this for 86 years or at least for the 41 years that I have been running. So, it is not an overnight solution or answer but an ongoing living daily quest.
My final thought: “Keep on believing. Keep on moving."