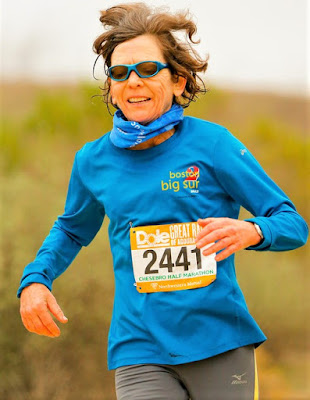 (Sept. 2019) Marie Wickham is a frequent participant in New York Road Runner races, and marathons in general all over the world. She has even run Comrades in South Africa. At 64, she can still crack 8:00-minute-pace in a half marathon. Although she has run for as long as she can remember, Wickham didn’t start racing (and winning) till she was in her 30s. She lives on the Upper East Side of Manhattan with easy access to her beloved Central Park.

When did you start running, and why?  I had to laugh at this one. To be honest that is like asking me what date I started brushing my teeth. I feel like I always ran. I grew up in California and we were a very active family. I would run with my father in the mornings before school, and some days we would run on the beach and jump in the ocean afterwards. I would have to say he was my early inspiration for running.
I didn't start racing until my 30's so I didn't really train until then. I started building up mileage to prepare for my first marathon and didn't think too much about speed. Later, I slowly tried speed work, and while I didn't enjoy it that much, I could see that it helped. When I started setting goals for myself like a 20 minute 5k, 40 minute 10k,  1:30 half marathon and 3:10 marathon I realized I needed a more organized training schedule.  I was on a Moving Comfort running team and our coach at the time, Ed Stickles, used Jack Daniels Running Formula. That really clicked for me.
How much did you run in your peak years? Now? Right now its zero since I'm recovering from a bike accident with a broken collarbone but generally it is about 40 miles a week. My peak when I was doing PRs in 2000 was 80 miles a week.

Best performances or achievements/memorable races: My best race was probably my marathon PR 3:08 at the 2000 London Marathon. Running Comrades was also a great thrill. Most memorable was when I started running as an Achilles guide to blind runners.  Eddie Montanez was one of the blind runners who became a close friend.  He had run a 4:20 marathon but wanted to qualify for Boston as a sighted runner and needed a 3:20. With help from my teammates Kathleen Coughlin and Chris Bilsky and a year of training, we chose the Steamtown marathon (16 miles nice downhill). The day was perfect race weather and from the start we kept on pace with a bit of time in the bank. The second half of the course is tougher so by mile 20 we knew it was going to be tight, but we kept  encouraging him, keeping his spirits up. The last 6 miles were tough. At the end there is a little hill and when you crest the hill you see the finish line in the distance. The clock showed 3:20 and we needed 3:20:59. I'll never forget that stretch. It seemed to take forever and Eddie was definitely tired but we kept telling him to listen for the cheers at the finish line. He finished in 3:20:49 with 11 seconds to spare.

Diet? My weight has been very stable. I think I have been about 98 pounds for 15 years. I eat everything!

Obstacles/Injuries along the way?  Most runners have normal running injuries but I have never really had any traditional running injuries. I have "trip and fall on the trail" injuries. Mostly they heal in a week or two and I'm back out running. In the 1998 Rome marathon I was knocked over at the finish by a spectator that resulted in a collarbone break so that took a bit longer to heal. Right now I'm recovering from a bike accident and have another broken collarbone.
Another different obstacle for me is breathing related.I have had coughing fits for a few years and the only diagnoses is chronic sinusitis.  I have not been able to get rid of it and I can feel that it affects my running. But I still love all my runs.

Are you bothered getting older and slower? No, because I have always been more of a social runner than a competitor.  I have met countless friends just chatting on runs. I love my Moving Comfort running team and although the team is no longer, the friends are forever.

When I lived in Caracas Venezuela in 1985, I would run around the streets there and met a group called the Hash House Harriers.  I have run with them all over the world since then, and I am on their team right now.  I started running with a group of friends in the mornings before work and that group still runs almost every day in the park. I join them Saturdays now for long runs. I can't even express how much their friendship means to me.

Has running helped with aging?  I hope so. I think anything that brings you happiness helps with aging.  Also my mother had Alzheimers and I think getting blood moving however you do it, is helpful.

Advice for prospective lifetime runners?  Do your easy runs easy.  Check out the Jack Daniels formula charts which indicate appropriate paces. Input your latest race and it will tell you what pace you should be doing your intervals,  tempos, and easy runs. I find that most people will look at that chart and think that the long run pace is way too slow. IT ISN'T!!!  By doing that pace you can build up mileage without injury and you can do your speed work to get faster. Run on soft surface if possible. Rotate shoes as much as possible.

Lessons learned from running? Running is so natural and easy.  I take my running shoes wherever I go.  It is a perfect way to explore new cities.
Email ThisBlogThis!Share to TwitterShare to FacebookShare to Pinterest
Labels: profile
Newer Post Older Post Home