PROFILE--Creigh Kelley has been running for 50+ years 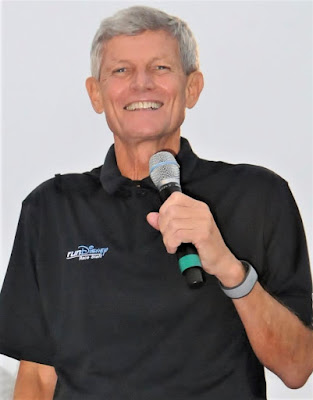 (Oct. 2019) A serious runner for 50+ years, Denver's Creigh Kelley has made major contributions to U.S. road racing as a race director, start/finish announcer, and influencer with USATF and other national running organizations. Now 72, he continues running, announcing, and organizing, despite a serious cancer scare in 2012. From that, he learned "to embrace every part of our remaining years." His dog/training partner keeps him centered as well, always getting excited by seemingly-mundane sights and sounds on their early-morning runs. "He helps me appreciate the simple pleasures of the natural world," says Kelley.

Your career/profession? I’ve been a competitive runner, a race director and have held leadership positions in the local and national running community. I was one of the founders of Running USA, the national non-profit running trade association. Fifteen-plus years ago, I was one of the original managers of the
Denver Colfax Marathon weekend, and currently serve as race director of this 20,000-entrant event.

I’ve also been the voice of many of the largest triathlon and running events in the U.S. and abroad for the past 40 years. (My name is pronounced “Cree.”) I’ve done radio and TV color commentary at local and national events, including the Giant Race (SF Giants) in Arizona during spring training, the Half Marathon Championships, World Triathlon Championships, Chicago Marathon, Columbus Marathon, the Summer Olympics in Sydney, and the PRRO Championships. I’ve announced the start/finish line of the U.S. Olympic Marathon Trials four times, and will announce for the 26th consecutive time at the Walt Disney World Marathon in January 2020.

In 2004, I formed a 501 c 3, the Kipture Primary School Foundation (Kapsabet, Kenya). With the help of hundreds of donors, the Foundation has built classrooms, a kitchen, a library to name a few of the projects without having any administrative expenses or staff.

When and why did you start running? I started running informally as an elementary-school kid along side my friends on bikes. I didn’t have one. My sophomore year at Staples HS in Wesport, CT, I went out for track, having no idea what that meant. I laced up my Keds, put on my gym clothes, and headed out to the track.

How much did you run in your peak years, miles/week, etc? Looking back at my training logs, I seemed to hit about  50-60 miles/ week. Honestly, it was always a workaround since I was working long hours beginning in 1978. My greatest regret was the cigarette smoking I did from 1968 to 1975 (a pack to a pack and a half/day). As a young officer in Vietnam and then in Germany, it was an occupational norm. During that time I never trained.

What were some of your top race performances, or running achievements you are most proud of? In the early 80’s I ran 32:42 at Peachtree and was just under 100th place! That, plus my 2:32 at the Hang Ten Marathon in the early 80’s, cemented in my mind that I better focus on other ways to be in the sport of distance racing.

I was also proud to finish 5th in the Connecticut State 2-mile in 10:08 at age 17, and to be elected honorary captain of the track team at Virginia Military Institute. In the early 1980s, I was elected National Chair of long distance running for TAC (now USATF).

In the summer of 2012, I trained hard (and secretly) to see what I could do as a 65-year-old racer. I picked an Oklahoma race where no one would know me in October, paid the entry fee, and booked a plane ticket. By mid-September I was in my best shape since the late 90’s. And then my doctor told me I had cancer, and needed surgery.


I asked if he could delay it, so I could do the Oklahoma race. He said, No way. The day before my first cancer surgery in October, 2012, I laced up my racing flats, headed out the door at 5 am, and ran the equivalent of a sub-20:00 5K on my neighborhood streets. That was good enough for me.

How much are you running and cross-training now? My mileage varies from 20-25 miles/ week and I try to get in 4 days/ week. My longest run is usually 6-8 miles but recent injuries have me hobbling through 3+ miles every other day. Regrettably I don’t do enough strength work but I have increased my stretching a bit. In a do-over, I would’ve done a lot more post-run stretching.

Does it bother you that you are slower now? Yes, running at much slower per mile pace is always nagging in the back of my mind, but I don’t let it bother me too much. After being told I was cancer-free in 2013, no matter what training I tried to ramp up, I realized the speed wheels were wearing out. Today, I still run with a 5:30 am small training group from my home a few days each week. That motivates me. The camaraderie we experience during and after those runs jacks me up each time.

How have your diet and weight changed through the years, if at all? My diet before cancer was modeled after Bill Rodgers: “I eat see-food--all the food I see!” The only major changes I have made are cutting out 90 percent of desserts, and making salads my lunchtime choice about 90 percent of the time. My racing weight in the 70-80’s was about 140 (I’m about 5’11”). In the 90’s it was no greater than 145. In 2000-2012 it was 148-152. Now it’s hovering around 160, and it’s clearly due to reduced mileage. I do take a multi-vitamin and a calcium pill every day but that’s it.

Have you got an inspirational quote or two? My absolute favorite saying is, “Put your feet on the floor, and get out the door!” I also don’t suffer excuses from myself or other running buddies. They will tell you that I often say “Distance running is the land of no excuses!”

What 3 short tips would you offer to runners who hope to become lifetime runners?
1--Find others to train with periodically, especially better runners than you. It will keep you sharp and prevent laziness.
2--Stretch after each run and build in some light weight work.
3--Keep an eye on your weight. Too much of an increase can put undue stress on your feet and your knees.

How does running & fitness improve your life on a daily/weekly basis? Getting out on regularly scheduled runs is essential to my mental health. There has NEVER been a training run that, once completed, diminished my outlook on life. EVERY run, fast or plodding, makes me see the coming hours through a much brighter lens!

What are the biggest lessons you have learned from running? Running lets me appreciate the world around me. Being an early morning runner, my senses are usually heightened with the stillness, the freshness, and the unimpeded journey. Running with my dog (something I do almost every time, except when I travel) helps me appreciate the simple pleasures found in the natural world. He gets excited by seemingly mundane moments or things (“Hey, look at that interesting bush over there. Let’s take a detour!”).

I often remember that there is no way around trials of miles and miles of trials (someone very important once said that!). Also never neglect hill training, tempo runs, and negative splitting long runs.

My philosophy, carved into me after believing I might die in 2012, is to embrace every part of your remaining years. Don’t put off that trip. If you have other sports, stay with them. I love downhill skiing and go after it almost every year. Don’t ignore the precious people in your life. Tell friends and family of your love for them. Smile more often and don’t be shy about complimenting others. Try to do at least one positive thing each day, particularly for others.

I’ve always admired Jeff Galloway’s simple statement that we should run until we’re 100. It sounded so far away a few years ago, but today it gives me a goal.
Email ThisBlogThis!Share to TwitterShare to FacebookShare to Pinterest
Labels: profile
Newer Post Older Post Home