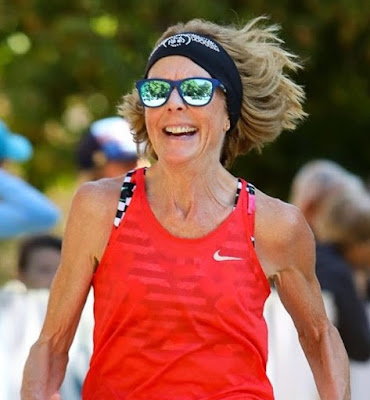 (Feb. 2020) Gwen Jacobson has made up for lost time. In just 10 years of running, the 61-year-old has completed 71 marathons (the most in one year is 14); won the 2019 Minnesota Runner of the Year for W60-64; and tied for second in the United States (behind Joan Benoit Samuelson) and fourth in the world in for best women's marathon times in the 60-64 age group.  In her spare time during 2019, she completed her 50 States marathon tour, and set a personal best in the marathon.  She resides in Rochester, MN, but through running she has traveled the world.

Career? I retired on 12/31/2017 after a career of over 40 years in the insurance industry. In May of 2018 I went back to work as a supplemental employee for Mayo Clinic as a Member Service Rep at the Dan Abraham Healthy Living Center, Mayo Clinic’s employee wellness center. I enjoy the benefits of a free gym membership as well as working with people and sharing my love of fitness.

When did you start running and why? I started running in January 2010 to train for a 5K race for a co-worker’s husband who was
battling cancer. I decided to continue running a race every month to keep me motivated and became interested in longer distances.

Did you have an early inspiration or person who motivated you? I met Dick Beardsley  early in my running career and he was very encouraging. I was inspired not only his running but by his recovery over addiction. 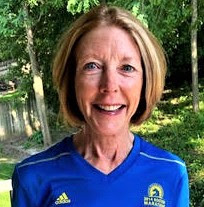 How much did you run per week in your peak years? Now?  In my peak years I was running between 45-50 miles weekly. Now I run between 25-40 maximum per week. I try to run at least 30 miles weekly.

What were some of your better/memorable races?  Grandma’s Marathon, Duluth MN has been the site of some of my most memorable marathons. I had my worst marathon there in 2012 when I suffered a left femur stress fracture and finished in over 5 hours. I recovered and went back in 2013 and ran my first sub 4-hour Boston qualifying race. Grandma’s Marathon 2016 was my personal best of 3:28 until last September when I ran a 3:25 at the Clarence DeMar Marathon.

The 2014 Boston Marathon is also a race I will never forget. It was my first Boston Marathon the year after the tragic bombing. The support of the city was overwhelming and the thrill of crossing the finish line on Boylston street will stay with me forever.

Has your diet changed through the years?  Nutrition, especially before race days has been a challenge. I struggle with stomach issues during the marathon. I limit gluten for a week before a marathon and eat grilled chicken and brown rice the night before a race. No pasta for me. I am not a vegetarian but I do limit my intake of red meat. Nutrition on race day includes a banana with peanut butter, UCAN Performance Energy and UCAN Hydrate before the race. Huma Gels and water during the race as I cannot tolerate Gatorade or other sports drinks.

Cross Training? I started swimming in 2014 but was inconsistent. It became my fall back when I was injured and couldn’t run. In the past four years, I have included it as part of training at least once per week. I added strength training this year and Pilates Reformer training. This has improved my endurance and core stability.

How important is social running to you? I am competitive on race days but enjoy social running. I belong to two local running clubs, and I run with my teammates  often. I enjoy mentoring new runners, and will adapt my pace to run to others. I will run alone if I have to but prefer running with the great community of runners we have in the Rochester area.

Obstacles along the way? In June 2012 during my second marathon I experienced a left femur stress fracture (caused by over training) that took me out for over 7 weeks. Recovery was crutches with absolutely no exercise at all. I followed doctor’s orders and made a full recovery.

Unfortunately, I experienced a left tibia fracture during an 8K race the following spring. Swimming and running in the pool helped me recover from that injury. In 2016 I was racing a marathon every month and also racing shorter races. This led to a high-grade TFL tear in my right hip during a marathon. They treated this injury with an autologous blood injection. With rest and a slow return to running I was able to run a marathon 2 months after this injury. After this injury I concentrated on running only the marathon and half-marathon distance until this year when I cautiously added back in a few shorter distance races.

Any favorite quotes?
Isaiah 40:31 “They will soar on wings like eagles; they will run and not grow weary”
Joy Johnson: “Each run is guaranteed to be different. The very best part of being alive is never knowing what the next step will bring.”

Running-training philosophy? I alternate interval training and hill repeats and do tempo runs in my weekly training. I do strength training twice weekly to build endurance. I do Pilates Reformer once weekly to build and maintain my core stability. I cross train with swimming year-round, and add biking in the summer months. I take one rest day per week. I have learned to listen to my body and if I need an extra rest day, I take it.

What are the biggest lessons you have learned from running? I have learned you have to accept whatever comes your way, and make adjustments as needed to reach goals.

How has running helped you with the aging process? I do not feel like I am in my 60s. I run with younger people all the time and this keeps me young. I believe running is slowing the aging process for me by keeping my cardio health strong. My VO2 Max is 53 which is comparable to people much younger than me. My bones are healthier and stronger from running. This was proven by my bone scan after the early injuries. Running also helps me maintain a healthy weight.

What three tips would you give a younger runner who wants to be a lifetime runner?
1.   Include cross training such as swimming or biking into your training plan to help prevent injury.
2.   Strength training two times per week will strengthen your muscles, build endurance and help improve your running.
3.   Include a rest day into your weekly training. Listen to your body