PROFILE--John Volkman has been running (and marathoning) for 39 years 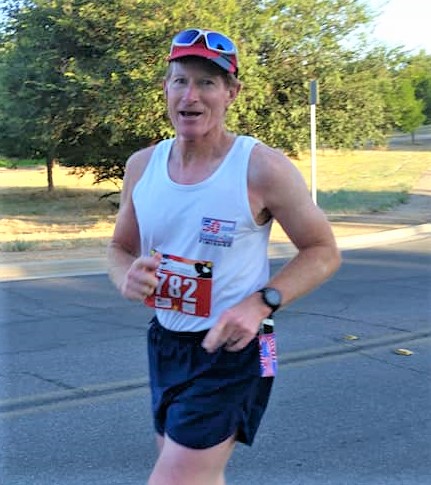 (May, 2020) John Volkman, of Fresno CA, was sailing along pretty smoothly last fall, with more than 150 marathons in the bag in his 69 years, when he started feeling chest pains. He got himself to a cardiologist--smart guy, this John!--and learned that he needed surgery and a stent. This is perhaps the news most feared by runners, but Volkman didn't let it keep him down for long. On March 1 of this year, he returned to the site of his first marathon in 1981 (Napa Valley), and covered the distance yet again. He's also one of those guys who proposed to his wife in a marathon. She was waiting for him at the top of Heartbreak Hill in Boston; he got there, and dropped to one knee. Video links below.

When did you start running and why? Dared by teacher/friend to run a 6 mile race because he said I wasn’t in very good shape for our city-league basketball team. That was in March 1980. Exactly a year later I ran my first marathon and broke 3 hours.

Estimate of your total lifetime miles? About 75,000

How much are you running and cross-training now?
Run 4 times a week for 30-35 miles/week. Go to gym 2-3 times/week for lifting and stretching. I stretch before and after every run,

Does it bother you that you are slower now? After running for 40 years, I long ago figured out to keep my goals current and not compare them to past times, but it is still frustrating to work just as hard but see slower times. I stay motivated by still being competitive in my age group especially in small to medium marathons. I’m also very motivated by my wife’s running and the runners that I coach. I met my wife coaching her to her first marathon in 2013 and it’s been interesting to see her pass me in speed. I also proposed to her at the top of Heartbreak Hill in the Boston Marathon in 2014, the year after the bombing. Here are several YouTube clips of the proposal. Here, and here.

Diet or weight changes? In my running prime in my 30s and 40s I was at 155-159; now I’m more in 170 range. I just take a mult-vitamin.  I was mostly vegetarian until I got married, and my wife has increased the protein in my diet. This is accomplished with more lean meat and protein drinks.

What injuries or other health issues have you faced through the years? How have you dealt with these?
I never missed more than 3 days of running in a row for over 30 years when I broke my shoulder skiing in Dec 2012. My first and only long term running injury was a high hamstring pull in early 2017 that slowed me for much of that year.

In Oct 2019 I started having chest pains so I saw a heart specialist and found that I had 3 blockages in my arteries. So instead of running Tulsa Marathon, I had a heart procedure the week before Thanksgiving. When I went for follow-up in Jan., they found a near complete blockage in one artery so I had a stent put in. I now seem to be running pretty close to normal again.

A favorite motivational phrase or two?

“The will to win means nothing without the will to prepare.” Juma Ikangaa
I’ve recited these verses every marathon: Isa. 40:29-31  "He gives strength to the weary, And to him who lacks might He increases power.  Though youths grow weary and tired, And vigorous young men stumble badly, Yet those who wait for the Lord will gain new strength; They will mount up with wings like eagles, They will run and not get tired, They will walk and not become weary."

Three tips for other would-be lifetime runners?
1--Take at least one day off every week. Streaks are for freaks…and those who plan to get injured.
2--When doing speed work, always save a gear or two. We are training for distance races and for life, not the Olympics.
3--Make running a priority and make time for it. The energy and efficiency you gain from running will make-up for the time it takes to do it.

How does running & fitness improve your life on a daily/weekly basis?
I have more energy than most people both my age and any age. It gives me the ability to do physical activities like hiking, doing yardwork, and going on trips that involve a lot of walking.

What are the biggest lessons (life lessons and running lessons) you have learned from running? For 40 years, running has been the biggest source of my social life. To continue to run and enjoy running, it is really important to have relationships with other runners. You can learn so much talking with others when you run and go to events with them. I’ve coached marathoners since 1998, first with Team in Training and now with Fleet Feet, so I’ve been blessed to have a lot of runners as friends. I was single until I got married at age 64 so it really was other runners who were my social life.
Email ThisBlogThis!Share to TwitterShare to FacebookShare to Pinterest
Labels: profile
Newer Post Older Post Home