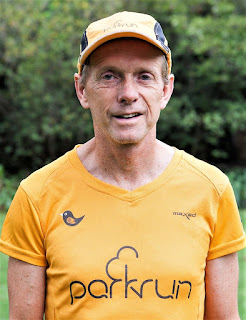 Bruce Fordyce, 62, is the most well-known runner in South Africa, having won that country's internationally famous Comrades Marathon (54 miles) eight years in a row and nine times overall. During that period, Fordyce could not compete internationally, due to South Africa's apartheid policies--which he actively campaigned against. Eventually, running and track and field were among the first sports to welcome participation by black South Africans.

Career/profession? I have had a number of careers including being a full time runner for about a decade. But I was first an archaeologist specializing in early man and Bushman ( San ) rock art. I lectured and was a research officer at the University of the Witwatersrand, Johannesburg, for a few years. I was then a writer for a few publications, a motivational speaker, and for 7 years I was CEO of a sports development program for disadvantaged sports people. Most recently I am CEO
of parkrun SA, which is a free timed running and walking event that has exploded over South Africa. We currently have just under a million members with between 3000-5000 joining every year.

When did you start running and why? I ran throughout my school years particularly at longer distances but I also divided my time playing football ( soccer), cricket and rugby. I started running seriously again in my second year at University. I started because I watched the Comrades marathon on television in June 1976 and was inspired (SA only had television from 1976 onward). I was also involved, troubled and attacked by the police in the 1976 Soweto uprisings, and was trying to find something to do to help me control my destiny and have some purpose in life. My first run on this journey was June 18th 1976. I ran, at night, for 10 minutes around my university rugby fields. That was all I could manage. But I ran again the next day, and the next…

Training in peak running years? I took 3 years to build up to about 100- 120 miles a week in peak season and about 60- 70 miles a week in my off season. Of course in the early days we measured everything in miles because the text books, running publications, and our heroes’ log books were in miles. But SA is a metric country, so after a while we measured everything in kilometers.

Top race performances? I am most proud of my 9

Comrades marathon wins in which I broke the course record 5 times. (I have run 30 Comrades marathons in total.) Also 3 London to Brighton ( 55 miles) wins, one U.S. 50 mile championships ( Chicago, October 1984) where I set a World best of 4.50.51 for a loop course (I ran slightly faster at London to Brighton point to point In 1983.) The record still stands. I also value my win in a 100km World invitational race in Stellenbosch, SA, in 1989. I ran 6:25, which may have been a World best at the time.

Current running and cross training? I have lost all the cartilage in my right knee but am soldering on, and refuse to have a knee replacement operation because I’ve been told you can’t run after that operation. If I didn’t run, my family would be driven demented by my grumpiness and would have to put down like a beloved old dog. I probably run 60 to 70 kilometers a week ( shuffle/jog/run). I cycle a bit and have a gym personal training session twice a week.

A recent race or two? At the age of 56 I ran 2:58 for the New York marathon, but then my knee packed up. I can now race a 5km park run in about 23-25 minutes. I hobbled through the 56km Two Oceans ultra in Cape Town in 6:26 in 2016. I plan to try and beat that time in the 50th Two Oceans next year. I qualified for this Two Oceans by running the Sydney marathon three weeks ago in 4:22

What current training works best for you? I run every day about 8 -10kms, with a longer run on a weekend. However if there is a major event approaching, I will increase that. I also cycle gently for about an hour 5 days a week and have two gym sessions per week.

Does it bother you that you are slower now? I would love to feel the wind in my hair and the spring in my step like the old days, but otherwise I am not really concerned. I enjoy being out there watching the seasons change or laughing and chatting to running mates. Long ago I gave myself permission to become slow.

What is your current diet, and has it changed? I used to have a fairly unhealthy young person's diet, more or less eating whatever I liked or what was put in front of me. This included junk food. I followed the strict Ron Hill carb-depletion/carb-loading diet in the 6 days before race day. Now I am an ardent believer in the LCHF( Banting/Tim Noakes ) diet. It has transformed my life and health. On a normal western diet I ballooned to 74 kgs when I decreased my running and racing, and felt terrible. I struggled to run a sub 10 hour Comrades marathon. On the LCHF diet I quickly lost 12kgs, and my Comrades time dropped to 7 ½ hours. The night before the 2011 New York marathon, I ate fish and salad for dinner, and on race morning I ran on water only. No sweetened drinks or gels. I ran 2:58 in my mid 50s.

Any current vitamins or supplements? I take aspirin, Omega 3 salmon oil and iron supplements. The first two for general health and the iron because living at high altitude I believe I need to boost my red blood cell count. Very occasionally I take an anti-inflammatory for my damaged knee.

How would you describe your philosophy of life, running, and aging? I love my running and it is an important part of my day. I am not concerned about slowing up, and when I cant run, I will walk. I am all too aware of the benefits of being fit and of exercising and have no intention of stopping. Other older runners inspire me, most particularly Wally Hayward who ran the Comrades at the age of 80 in 9:45 and who continued to run every day until he died at age 97.

What are the biggest lessons you have learned from running? I have learned that the greatest joys in life sometimes come after you have hurt the most. Striving for something is amazing, and running teaches all of us how important it is to have discipline in our lives

How do you maintain your motivation and optimism? I actually look forward to slowing down and to the inevitable changes that will come. At park run, every 5 years I will move into an older age category where the competition is fun rather than intense.

What advice do you give to younger runners who would like to become Lifetime Runners? Don’t burn yourself out. Make yourself a promise that the gift of running is something you give yourself for life. It is perhaps the most important gift you will ever give yourself.

Always remember that life is a marathon, not a sprint. Give yourself permission to run slowly and go the distance.
Email ThisBlogThis!Share to TwitterShare to FacebookShare to Pinterest
Labels: profile
Newer Post Older Post Home