PROFILE--Frank Handelman has been running for 57 years 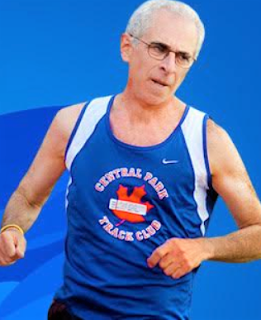 Frank Handelman, a criminal defense attorney with a competitive edge, is a lifelong runner. He uses the same winning techniques competing on the road and track and in the courtroom, and has had great success at both. Handelman was also a member of the legendary New York Pioneer Club and trained with Ed Levy and Joe Yancey, its founders.

Started running/years running? I have been running for 57 years. I began in the fall of 1961, my junior year in high school in Cleveland, Ohio.

Why did you start running? I knew I was fast running on Little League teams. Believe me, it was my only baseball skill. In my junior year I went out for the cross country team. After a few weeks of training, I began to move up from the back of the pack and by the end of the season was second on the team.  I found I loved
the training and racing.  In my senior year, I began winning races and ran in the Ohio state championship. I was also the Cleveland indoor mile champion.

I received an athletic scholarship to the University of Pittsburgh and went on to run for the University of Chicago Track Club with its great Hall of Fame coach Ted Haydon while studying toward my master’s degree in social work.  I then moved to New York in 1969 and eventually enrolled in law school at New York University, where I met my teammate and training partner Jack Brennan in our first semester.

Jack and I ran endless miles together over the next 30 years - he died much too young at age 52. He was a true long-distance runner with a marathon best of 2:20. After law school I was a public defender for five years and went into private practice in 1980. I have also been an adjunct professor at Fordham Law School since 2002.

Did you have an early inspiration or person who motivated you? No.  I was pretty much self-driven once I found my passion for running. When I helped form the Central Park Track Club (CPTC) in 1972, my teammates became my inspiration.

How much did you run per week in your peak years? Now? In the mid-70s to 1981 I ran 60 miles a week.  In those days, I was considered woefully under trained by my CPTC teammates.  I was running the marathon then and ran 2:35 three times - my teammates would be doing 90-120 a week and thought I was lazy. But my emphasis was on shorter distances and that worked for me. It also kept me going many more years, as I didn’t kill myself with too much mileage.


I now run (ready for this?) about 5 miles a week or less, and never on the roads or pavement.  In 2015 I had right hip replacement surgery, following two fusion surgeries on my right ankle in 2009.   I really should not be running at all.  I manage by cross training and minimal running with the goal to stay in great shape.

How did you train differently in your younger years?
Back in the 1970s, I ran most days, with little cross training or stretching (damn!).  When I was a Legal Aid lawyer in the late 1970s I would come home after work and go for long runs alone in Central Park late at night.  Did little track work then, mostly ran short races for speed.  And I had no coach after I moved to Manhattan from Chicago - trained by myself or ran at the Central Park Reservoir with my CPTC teammates.

How do you train now? Do you attend coached workouts?
One day a week of very short distance, usually a slow jog; sometimes short intervals.  Spin class and the gym, cycling, elliptical and weight work. A bit of swimming. No coached workouts - no one else can really train like this (why would they?).

Has your diet changed through the years? Reduced but did not cut out French fries and beer; need to eat more fruit and veggies. My weakness is that I love bread! Basically, I eat sensibly. My weight is only five pounds above my college weight.

How important is social running to you? If you were/are a competitive runner, can you adapt to the slower times and enjoy a social run? I was totally competitive my entire career, but I will say I am enjoying myself now, even though I am running so much slower than I would like given my limited training and hip replacement.

Do I miss competing at the top? Yes, I miss running fast, fluid and feeling in charge. Last month in Buffalo at the National Masters 5K cross country meet, I was way in the back and I have to be OK with that at this point or not run at all.

Obstacles along the way: Five orthopedic surgeries, including plantar fascia, a bunion, two ankle fusions and a hip replacement.  I thought I would be through with racing after the 2009 ankle surgeries - my right foot is full of titanium plates and screws.  But I came back and ran the 400 meters in 2014, only to then have a cycling accident that lead to hip replacement in 2015. Against all odds (and logic) I came back this year to run a few track meets and then the cross country meet last month in Buffalo.

A favorite quote:  I always tell everyone I coach - “It is always better to be 10% undertrained than 1% over trained.” And also, to always double knot your running shoes.

Running-training philosophy: Make this a lifetime pursuit. As a coach (several stints as a college track and cross country coach and former head coach of the NYRR charity team, Team for Kids) my goal is to help create lifetime runners, not just to have those I coach run a marathon to check it off their bucket list.

How has running helped you with the aging process? Well, it helps to feel like you are in good shape at age 73. I stay engaged in the running community by coaching. I volunteer with a Long Island City team and enjoy being around the runners. I also coach individuals and it is a joy to see them reach their goals. Through running, I have managed to stay fit and be socially engaged.

What are the biggest lessons (life lessons and running lessons) you learned from running? The journey and pursuit of goals are the key.  Running fast and winning races is wonderful, but the long process of getting back to where you want to be after setbacks is the essence in life, family, and work as well as athletics.

What do you know now about running/fitness that you didn’t know back when? In college we trained way too hard and did not race fast enough. Coaches did not understand the importance of rest and tapering for big meets.

For myself, I wish I hadn't spent seven years on the marathon - I was always much better at shorter races, and wish I had run some 800 meter and mile races in my late 20s and early 30s when I was running so well. 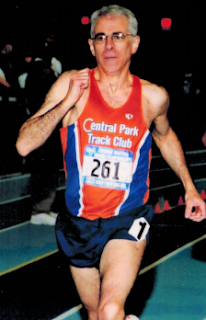 courthouse? Well, first, I am super competitive so I always want to win. I tried to train hard and also anticipate the unknown factors of the races and never underestimate my competitors. In court you always come up against problems you didn’t anticipate – you have to be quick on your feet so you can respond – similar to a race strategy.

I’ve learned to take the obstacles as they come and keep going. I try to be creative as well and switch up my strategy.