PROFILE—Reno Stirrat has been running for 49 years

Reno Stirrat is a legend in his own time. He is the only American to have run a marathon in five decades in under 2:45, and one of only two people in the world who have done so.  At 64, he is still running strong and has set another goal: in 2020 he’s going for another decade of sub-three-hour marathons. He recently returned home to New Jersey from Quincy, Massachusetts, and runs with the Shore Athletic Club.

When did you start running and why?  September 1969 (DOB 1954) to get in shape for football then ran the 440 in track. During football we started every practice by running a mile, which I would be first in. The cross-country coach watched this and was interested in my speed. He conspired with the football coach and set me up to see just how fast I could run.

At the next practice, instead of having me run the mile with the team, he held me back by 30 seconds and told me if I didn’t win I had to do 10 hills. I still won and watched as the team did 10 hills because he told them the same thing.  My sophomore year everyone got bigger and I got taller but
skinnier so quit football. The day I quit football the cross-country coach asked if I wanted to run and I did. Two days later I won a Junior Varsity race. I made the varsity that year was 4th man and we won the Group meet.

Did you have an early inspiration or person who motivated you? My high school teammates and coaches. My track coach, Tom Skutka, was the first high school runner to break 4:20 in the mile. He went on to run for University Kansas that had six Olympians. We were always taught to run the best we can. 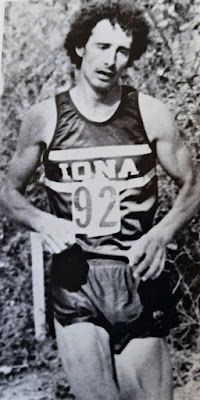 What were some of your better/memorable races?  My first marathon. I was in the Marines (joined after one year of college) and they were having the first Marine Corps Marathon in 1976. The base was putting on a 10-mile race and the winner would get a free entry and trip to DC for the marathon. I had never raced that long but won the race. I didn’t know how to prepare for 26.2 miles so I did two more 10 milers.  Having no experience I just went out and ran my first marathon in 2:44 on only thirty miles a week.

How did you train differently in your younger years?  Higher miles and a lot more quality.

How do you train now? Do you attend coached workouts?  I still do quality intervals, hills, tempos and long runs. I’m self-coached. I would be open to coaching but I have not found a coach who truly understands older competitive runners.

Has your diet changed through the years?  My diet has changed over the years from no beef then no chicken to no seafood. I’m now part-time vegan.

How important is social running to you? If you were/are a competitive runner, can you adapt to the slower times and enjoy a social run? I enjoy social running, which for me is doing hard workouts with faster runners. I don't get hung up on times. I stopped chasing PRs a long time ago. I just try to be competitive within my age group and with different people I know.

Obstacles along the way: none really

A favorite quote: Funny you say that. For the last eight years I have given back to the running community by posting a quote everyday on Facebook.  I have never missed a quote. There are so many good ones.

Running-training philosophy: Now this I will answer with a quote: "To give anything less than your best is to sacrifice the gift.” - Steve Prefontaine

What are the biggest lessons you have learned from running?  To give your best even when things seem bad. 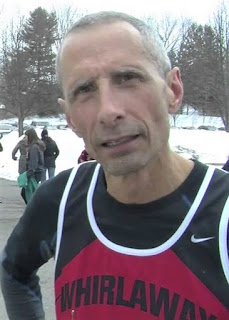 How has running helped you with the aging process?  I feel it’s kept me young. As you get older, especially when you are moving up from 40 to that 60 to 70 range, the body is going through changes. It gets tougher. That’s the key—to not let that get to you. You adjust and you keep moving on. If you’ve been running for longer, you are used to certain times. You kind of get into a routine and that is what you accept. All of a sudden that doesn’t happen. And you feel like you are a failure. That’s a difference, I believe, for longevity. A lot of Masters runners don’t let it get to them; It’s tough when you are in your late 50s and all of a sudden you see 60 and then you start a new life. For your PRs as a 60-year-old, you’ve never been there, so there you go.

What tips would you give a younger runner who wants to be a lifetime runner?  Be consistent and go for your dreams. Always readjust your goals. Keep plugging along. I like looking at every ten years as almost like a different life.