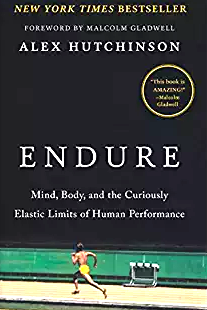 Happy New Year! We hope your running year is already off to a good start, and stays strong through the 12 months. Reading about running can provide great motivation.

Here are several of the running books we most enjoyed last year. If you haven't read them, they have our unqualified endorsement. (We also like our own books, and would be happy to have you try them, but it didn't seem quite fair to mention them here. )

Endure, Alex Hutchinson
Endure was the must-read science-of-endurance book in 2018. But don't expect a list of simple tips. Instead, you’ll find lots of thought-provoking explorations to motivate your personal challenges. In the middle of Endure, Hutchinson writes chapters titled “Pain,” “Muscle,” “Oxygen,” “Heat,” “Thirst,” and “Fuel"--all the topics you've debated for decades. But the book is mostly about how the brain influences performance. Again, no easy answers. But we all agree that
the brain's role in exercise has been under explored, and Hutchinson dives deep into this new world.--Amby

Let Your Mind Run: A Memoir of Thinking My Way to Victory,  Deena Kastor and Michelle Hamilton
I’ve been following Deena’s career since she was Deena Drossin and have always admired her grit and determination. This book was an excellent read of what makes Deena run. She is frank and detailed about using her mind to conquer he fears.  And I loved learning more about her legendary coach, Joe Vigil.--Gail


Running Is My Therapy, Scott Douglas

We often hear (and repeat to each other) that running is good for one's mental health, in many different ways. This is true. But it doesn't mean that every runner feels 100 percent upbeat and energetic every day, or that runners are immune from depression and other sub-optimal emotional states. Scott Douglas describes himself as having dysthymia--a sort of low grade depression where you don't often feel like frolicking with the crowd. His book, a personal and scientific look into running and the emotions, is full of testimony from both runners and therapists. It will help you understand others, and yourself, and will make you feel better about the days when you don't feel as zippy as you may think you should.--Amby

What I Talk About When I Talk About Running: A Memoir, Haruki Murakami
While training for the New York City Marathon, Haruki Murakami, a celebrated writer with numerous international honors, decided to keep a journal of his progress. The result is a memoir about his intertwined obsessions with running and writing, full of vivid recollections and insights, including the eureka moment when he decided to become a writer. By turns funny and sobering, this is a book for every runner. I loved it and found it very thought provoking. I have recommended it to many runners who feel the same.--Gail


When Running Made History, Roger Robinson

Roger is a topnotch journalist and historian. He writes with passion and he writes about what he knows. In this book, he writes about moments in history that he witnessed first hand, starting at the age of nine when his father took him to the 1948 postwar Olympics in London. It covers 60 years of running moments that made headlines. Maybe some of you were at the events he covers. For instance, I ran the 2001 NYC Marathon, just short of two months after the World Trade Tower terrorist bombing. Like Roger, who writes about his fear for his wife Kathrine Switzer covering it in the media car, my husband didn’t want me to run but I knew I had to and it was one of my most memorable marathons.--Gail