PROFILE--Janet Cain has been running for 44 years

Career/Profession: I am a clinical psychologist. Haven’t retired yet. I live in Sonoma, CA.

When did you start running, and why? I started running in 1975.  My life was out of control and I needed a stress reliever. I was in a demanding PhD psychology program at Case Western Reserve University. In addition, my 24-year-old husband was diagnosed with
stage 3 Hodgkin Lymphoma after four months of marriage. My life was out of control! I needed a simple inexpensive way to gain some control and relieve stress. I lived in Cleveland, home of Bonnie Bell cosmetics and the Bonnie Bell race series.  I entered a 10K and won.

How much did you run in your peak years? Now? As my husband's disease progressed and he was hospitalized for long stretches, I began to run more.  In the mid-1980s I was running 100 miles per week. In 1985 for our 10-year wedding anniversary we went to Italy where my architect husband had studied. I entered and won the Rome Marathon. I never did speed work or anything fancy, like massage or yoga. I just ran.

Now? After more than 40 years of running, I now have a coach, Dick Beardsley. He sends me a schedule each week with distance, speed workouts and tempo runs. His approach is like the Bill Squires method that a lot of Boston marathoners used in the day. I run about 50 to 65 miles per week but I need more recovery time now that I’m 67.

Memorable races: Number one is running into the Rome Coliseum for the final lap of my win in 1985. My first Boston (1984) with my parents and my dad's best cross country runner friend cheering and drinking Irish coffee on a cold, rainy day.  My loving husband of 25 years being my visual guide (even though he does not run often) at the Santa Rosa. Hearing the national Anthem and seeing our US flag while on the podium for my 3rd place world master's marathon championship in 2011. And my daily runs.

Diet and weight? We do not eat processed foods.  We eat healthy foods including red meat, but the meat is pasture raised.   Learning to cook is so important to good health. Most recipes can be simple and will save a lot of money over eating out. I have a glass of wine most nights. I am the same weight as in high school.

Injuries along the way? Lots of them! In 1987 Dick Beardsley and I visited George Sheehan at the Jersey shore before going to Sloane Kettering for my husband's bone marrow transplant. I had a cut on my heel that became a huge hole after swimming in polluted ocean water.  When my husband died several months later I was between surgery 11 and 12 to save my foot. In January of 1988 I had my 13th surgery that lasted 16 hours. I was in a wheelchair for one year post-surgery and did not run again for five years.  In 1995 I was assaulted by a patient and was left unconscious with a broken shoulder.  In March of 2013 while training for Boston two off-leash dogs hit the back of my legs flinging me up in the air, landing on my rear on the concrete unconscious.  It took months to recover from a very serious concussion caused by the fall. In 2015 had a torn hip labrium, which was healed with platelet rich plasma. Enough already!

Unfortunately, what I am dealing with now is the worst. In 2017 my eye doctor’s office phoned in the wrong eye drop prescription to my pharmacy. I used it for six weeks before another eye doctor checked my eye pressure, which was at a seriously dangerous level. I had emergency surgery the next day but the high eye pressure destroyed most of my optic nerve and on top of that, the surgery created a rare disease infection that experts just can't figure out.  I am now legally blind. Not sure I am coming back from this one but I have just started new eye drops that hopefully will restore my sight to some degree. 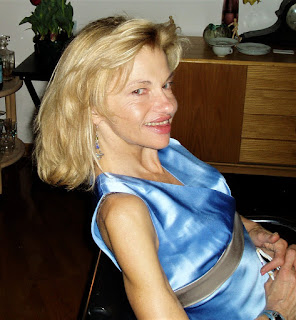 Favorite quote? I love Prefontaine’s quote: “To give anything less than your best is to waste the gift.”

Running philosophy? As I age I don’t want to know how slow I’m getting. I’m just going to keep going!

Advice for prospective lifetime runners?  Don’t make running so complicated. Just put on some good running shoes and head out the door. Enjoy nature. No time? Something is always better than nothing.

Lessons learned from running? The greatest gifts of running are the friends and supportive community surrounding our simple but profound act of putting one foot in front of the other.
Email ThisBlogThis!Share to TwitterShare to FacebookShare to Pinterest
Labels: profile
Newer Post Older Post Home