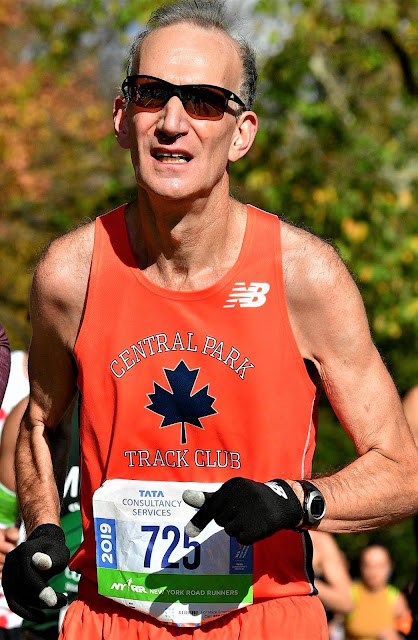 (Dec. 2019) Alan Ruben grew up in London, but has a long tenure in NYC running. He has finished 32 NYC Marathons in a row, and is a former president of the Central Park Track Club. As a youth, he played soccer for an hour every noon. He recalls that he wasn't very skilled, "but attempted to make up for that by running around more than anyone else."

Ruben ran his first NYC Marathon in 1987, and met his future wife, Gordon Bakoulis (5 time qualifier for the U.S. Olympic Marathon Trials), in 1994. They were married two years later. When the two aren't racking up wins in Central Park, they're watching their childrens' soccer games. (So the kids, if they follow their dad's evolution, will be all right.)

Career? I work in computer programming for a money transfer software company.

When and why did you start running? I started running in the fall of 1982 inspired by the London Marathon. I knew one person who had run the London Marathon and
felt sure that I could run it in a quicker time. I couldn’t get in to the 1983, 1984 or 1985 London marathons through their lottery system, so I decided to run the Paris Marathon in 1985. So really, 1985 was the start of my running, as I would stop running once I found out I hadn’t made it into the London Marathon.

Did you have an early inspiration or person who motivated you? No, but running in the UK had much more visibility than here, and there was always excellent coverage on the BBC. I grew up in the Seb Coe, Steve Ovett and Brendan Foster era. So running felt like part of our heritage. 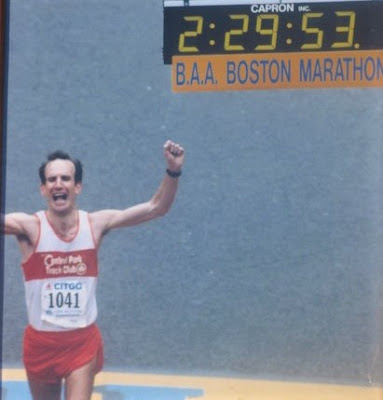 How much did you run per week in your peak years? Now? In my peak years I would average 60 miles a week, 3000 miles a year, year in year out. My mileage before marathons would peak in the 80s. Now I average 30-40 miles a week.

How did you train differently in your younger years?  It’s only in the last few years that I have reduced the volume of my training. For a long time, I kept the basis of my training – track workout on Tuesday, road workout on Thursday, medium/long run or race at weekend – the same, albeit slower. Now though, I’m down to one workout a week and less mileage on weekends.

Has your diet changed through the years? During my peak years (1991-2005) I was more careful about my diet, ate more vegetables and fruit, and fewer candy bars. Now I eat a lot more sweet stuff and greasy stuff. Don’t put a Twix bar in front of me or tiramisu. Greasy hamburgers? I’m in. Spaghetti Bolognese, chicken with skin, love it. 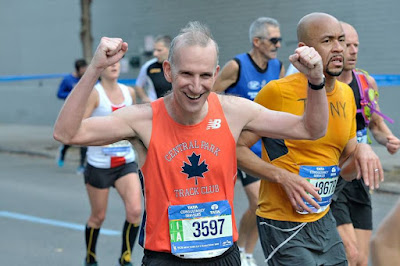 Cross Training? I did cross-training during my peak years, swimming and Lifecycle 2-3 times a week. I stopped cross-training completely for a time, but this year I have just starting back on the Lifecycle once a week. I have not done many sit-ups, pushups or weights.

How important is social running to you? I’ve been a member of the Central Park Track Club since 1990, so most of my Tuesday night and Thursday night workouts have been with them. It would have been impossible to train at the level I have done on my own, plus it is a lot more enjoyable training with other people. I always prefer to run my easy runs with other people, particularly these days, where even a short run can take an hour.

Obstacles along the way? I ran virtually injury-free until 2006. I was always very conservative – e.g. I would take a day off if I felt even a slight niggle. From then on, I got the usual running type injuries (hamstring etc) and with age they would take longer to clear up. I had a mild stroke in 2015, and this has slowed me down. Since last year I’ve had mild knee arthritis, and this has slowed me down a lot more.

A favorite quote? You can only do what you can do. 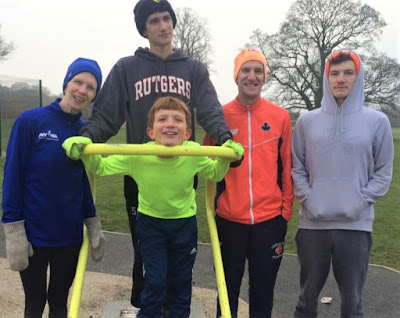 Running-training philosophy: Training is training and racing is racing – don’t mix the two. Train at a level that is repeatable, season after season, year after year. Don’t train at a level that is so taxing that you don’t want to put yourself through that again. In other words, enjoy the training process. You are better off training at a level a little less hard rather than a little more hard - from both an injury and burnout perspective.

What are the biggest lessons you have learned from running? The standard life lesson that the more you put into something, the more you get out of it. Running is something that anyone can improve at simply by running more.

How has running helped you with the aging process? During a race, where your whole mind is focusing on the task at hand and the effort is at the edge of what you can sustain, time passes slower. This is good because everyone wants to live longer or experience life for longer, and here in this race you can achieve that. However, time spent outside of running, particular the years as you get older do seem to pass quicker, so maybe it’s not helping at all. I guess time will tell.

What three tips would you give a younger runner who wants to be a lifetime runner?
1--Set up a running schedule that fits your lifestyle, season by season, that you would be happy to run year in, year out.
2--Enjoy the process.
3--Run on soft surfaces as much as possible