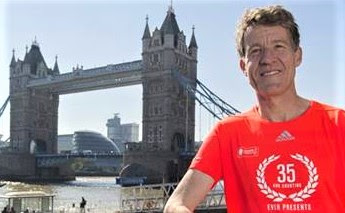 (Nov. 2019) England's Chris Finill has finished all 39 runnings of the London Marathon. He's also among a smattering of runners who have run a sub-3-hour marathon in five chronological decades--that is, the 1970s through the 2010s. Since next year launches a new decade, Finill will be aiming for his sixth, and has a reasonably good chance of achieving it. Still, he's only the second-best runner from his London street. Roger Bannister ranks first. In 2011, Finill ran across the U.S. with a buddy. (Feature-length documentary film here.) He turns 61 on New Year's Eve.

Career-profession? I qualified as a Charttered Accountant with Deloitte in 1986. For the last 20 years, I have worked as a Bursar at the Duke of Kent School in rural Surrey, England.

When did you start running and why? I was born on the street in North London where Roger Bannister
lived in and attended the same primary school as him. I therefore had an early awareness of running which was encouraged by my mother’s smoking habit. I used to run to the shops to buy her cigarettes and time myself there and back – always trying to improve on previous attempts.

How much did you run in your peak years? In my twenties I ran an average of 40 miles per week.

I represented Great Britain at 100k or 24 hours  for 10 years. Probably my best international performance was 14th at the World 100k Championships in Taiwan in 2003. 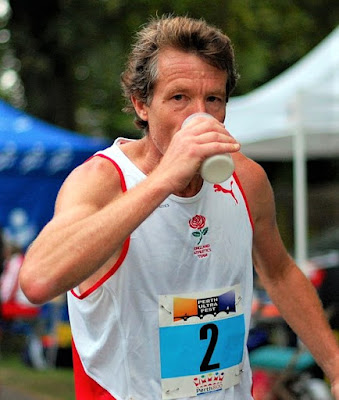 An estimate of your total lifetime miles? About 75,000.

How much are you running and cross-training now? I run about 30 miles per week, plus do lots of stretching and physio supplemented by a modest amount of strength training.

Does it bother you that you are slower now? Aging is inevitable and it doesn’t bother me as long as I’m not injured! My motivation comes, as always, by trying to be my best and performing competitively against those of similar age – or (sometimes!) beating those who are younger.

I have run all 39 London Marathons, so I am inspired to keep this streak up as long as I possibly can, and this remains my long term running goal.

Weight changes or special diet practices? I was about 158lbs at my fastest. I am now about 168lbs. I take turmeric tablets and occasionally vitamin D.The day before races I drink beetroot juice.

Injuries or health issues? In my twenties I suffered bouts of atrial fibrillation. One of Britain’s top sports cardiologists could find nothing wrong, and after 3-4 years of occasionally having bouts, they ceased to be a problem. I still start races cautiously which is a good tactic anyway.

A favorite quote? “No one on their deathbed has ever wished they had spent more time at work.” In other words, get out from behind the desk, and run. 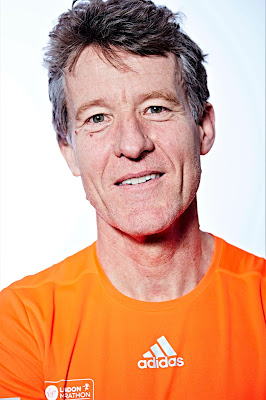 Three short tips for other lifetime runners?
1--Don’t overdo it.
2--Back off when injured.
3--Have regular physio.

How does running & fitness improve your life? It gives me a sense of well being and calm in a frenetic and demanding world.

What are the biggest lessons you have learned from running? You get out of anything what you’re prepared to put it. Aging is a physical and mental challenge just like the steeplechase barriers I faced in my youth. Aging is therefore little different from my steeplechase races. So, in many ways, nothing really changes.
Email ThisBlogThis!Share to TwitterShare to FacebookShare to Pinterest
Labels: profile
Newer Post Older Post Home