PROFILE--Charles Kastner has been running for 50 years

(Mar. 2020) Charles Kastner has played lots of roles throughout his life: Peace Corps volunteer (he started the first running program for blind students in the Republic of the Seychelles, and put together the country’s first wheelchair basketball team), investment banker, husband, father, marathoner, writer. He married his high school sweetheart (junior high actually). They have three children (all have run marathons and/or ultras) and five grandchildren. He lives in the same town where he grew up, Seattle. He calls his wife, Mary, his favorite running partner, though they now spend more time walking than running, since she has several autoimmune diseases. Between writing and fundraising for his wife’s disease, Kastner, now 65, is keeping busy and enjoying life.

Career/Profession? I am a writer. My latest books are Race Across America, and The 1929 Bunion Derby. For more, visit:  https://charleskastner.com

When did you start running and why? In September 1970 when I was a skinny 15-year-old sophomore at Inglemoor High School in Kenmore, Washington. My PE teacher took one look at me, and
suggested I try out for the cross-country team. I had no idea what the term “cross-country” meant, but gave it a try.

I joined about 50 guys on the high school track for the first day of practice. Our coach wanted a 10-man team and had a simple and rather brutal way to reduce the size of the squad – running hills at the end of practice. Each day a few of us dropped out. By the end of the week he had his 10-man squad. I earned three varsity letters in cross-country and developed a love for running.

Did you have an early inspiration or person who motivated you? My grandmother, Augusta Katherine Kastner, a Swedish immigrant who came to America when she was a little girl. Her husband died in 1920 when my dad was four years old and my uncle was one year old. She never remarried, and raised my father and uncle alone. She lived in the moment and found beauty in the simple things of life. One rainy day, when I was a little boy, she said, “Chuckie, I have a present for you.” I ran to her, expecting to receive a piece of candy or toy. Instead, she said, “Look outside and watch the rain dancing on the pavement.” Her words color my world to this day. 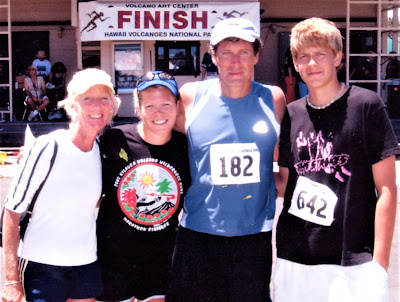 How much did you run per week in your peak years? Now? From about 1985 to 2010, I ran one or two marathons a year, plus many shorter distance races. Before my wife became ill in 2001, we ran at least 50 to 60 miles a week at the peak of our training. Since 2010, I’ve been competing in triathlons and took up boxing. Currently, I run about five miles a week, but maintain my fitness level with swimming, biking, and intense boxing sessions.

What were some of your memorable races/top performances? Running the first marathon of the new century with my wife in Hamilton, New Zealand. Running the 35 miles Two Oceans Marathon in Cape Town, South Africa. Finishing four Kilauea Volcano Marathons in  Volcanoes National Park. The most memorable of the four was running the course with my daughter Katie and son-in-law.  I have also run the Baltimore Marathon with my sons Andrew and Brian.

How did you train differently in your younger years? I basically just ran with little thought to cross training. Now I spend most of my time cross-training with boxing, swimming, and biking.

Has your diet changed through the years? Not really, I’ve always eaten a balanced diet.

How important is social running to you? My wife and I spent about 20 happy years training and competing in running events. When she became sick, I began training alone. I miss my training buddy. We worked out our problems, and laughed and talked as we trained.

My years as a high school cross-country runner installed a love of competition in me, but as the years went by, winning became less important to me. My greatest thrill was watching my kids pick up the sport. I never forced them to compete or even suggested that they do so; I guess they just saw their parents training and racing, and picked up the running bug. 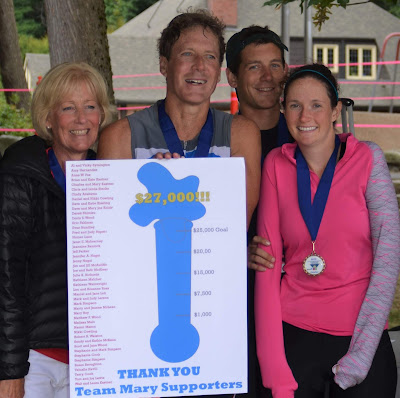 A favorite quote: Teddy Roosevelt’s In the Arena Speech: "It is not the critic who counts; not the man who points out how the strong man stumbles, or where the doer of deeds could have done them better. The credit belongs to the man who is actually in the arena, whose face is marred by dust and sweat and blood; who strives valiantly; who errs, and comes short again and again, because there is no effort without error and shortcoming; but who does actually strive to do the deeds; who knows the great enthusiasms, the great devotions; who spends himself in a worthy cause; who at the best knows in the end the triumph of high achievement, and who at the worst, if he fails, at least fails while daring greatly, so that his place shall never be with those cold and timid souls who know neither victory nor defeat."

Running philosophy: Consistency and perseverance win out in the end. Set goals and do your best to achieve them.

How has running helped you with the aging process? I know there are better ways to use my time than vegging out by the TV. Your body and mind want to be used, and when you exercise and challenge your mind and body, you’re fighting or delaying the aging process. Aging is a state of mind. If you’re excited about the future and keep your mind and body engaged, you will have a youthful attitude toward life.

What tips would you give a younger runner who wants to run for life?
1--Cross train by lifting weights, stretch, swim, and bike.
2--Develop a training plan and stick with it.
3--Be joyful in what you do.
4--Realize how lucky you are to have a mind and body that allows you to experience the world through running.

What are the biggest lessons you have learned through running? Your body is capable of doing much more than you think it can. Give it a challenge, train for it, and you can achieve seemingly impossible things.

How does running & fitness improve your life on a daily/weekly basis? I always appreciate the joy of moving my body through time and space; it’s an almost subconscious feeling of being part of the world. In a sense you lose the “other” and become part of the rhythm of the world. It’s a beautiful thing when you’re in that zone, that moment when you think you can run forever, and the rest of the world seems to melt away.