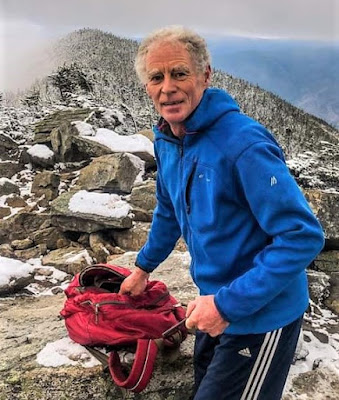 (Mar. 2020) Rich Fargo has one of the most impressive running resumes imaginable, and still very few have ever heard his name. Most notably, he's an eight-time winner of the Escarpment Trail Run, often called the "Boston Marathon of the Eastern trail races." Here's what you can expect: "The trail is viewed by many as an exaggeration of the term. It is extremely rocky and a runner must expect to navigate over boulders, downed trees, gullies and hidden roots the entire distance. Contestants must be prepared to deal with any of the forest's natural barriers, such as bees, slippery rocks, porcupines, black bears (not probable, but possible)."

Yeah, that's Fargo's kind of race. He got a good start in the sport from his high-school xc coach, John J. Kelley, the 1957 Boston Marathon winner.


Career-profession? I worked in engineering for 36 years. Recently retired from Otis Elevator where I had many roles in new product development

When did you start running and why? I started running in Junior High School, because I enjoyed it, liked being
part of a team, and was good enough to run varsity. In High School, I was fortunate to be able to run with the Sunday morning running group at John J Kelley’s house. This group included 2 Boston Marathon winners (Kelley and Amby Burfoot), plus members of a recent High School State champion team. It was quite challenging to keep up with them, but it got me off to a great start.

How much did you run in your peak years, miles/week, etc? Much of my running has been through commuting to work. For the 3 years I lived and worked in Pittsburgh, I commuted 10 miles each way on a very hilly course, 4 days/week, and often ran a 10k race on the weekend. This amounted to about 100 miles/week.

What were some of your top performances? I initially focused on marathons, and at my peak (age 24/25) ran 2:28 three times in a row at Marine Corps, Boston, and Hudson-Mohawk. Later, I switched to mainly trail running, and was very successful in New England and New York. I won the Escarpment 30K eight times, and the Nipmuck trail marathon seven times.

Any estimate of total lifetime miles? About 130,000 miles, most of it commuting to/from work.

How much are you running and cross-training now? I'm running about 45 miles/week, strength training three times/week, and no stretching. In the warm weather, I road bike about 50 miles/week.

Does it bother you that you are slower now? It bothered me in my early 40’s when I was no longer competitive in the open division. Now I’m OK with the slower times, and focus on doing well in my age group. Even though I took some years away from the Boston Marathon in my 40’s, I’ve always continued running and enjoyed it.

For current inspiration in retirement, I’ve set a goal of running another sub-3 hour marathon later this year. I have specific training milestones and interim races to measure my progress. Fingers crossed on actually meeting my goal.

How have your diet and weight changed through the years, if at all? I’ve always eaten a typical American diet, and eaten a lot of junk food, but it hasn’t caught up with me yet. I’m about 10 pounds heavier than in my prime, but part of it is due to the weight training, which I didn’t do years ago.

Injuries or other health issues? I’ve had very few injuries over the years. The ones that stopped me from running were surgery for Haglund’s deformity on both heels at age 40, and recently a strained gluteus medius.

Three tips for hopeful lifetime runners?
1--Get out on the trails. I think the cushioning and constant variation in stride prevent overuse injuries. Plus, you can no longer worry about the numbers on your watch when the terrain is so variable.
2--Eliminate the decision of whether to run or not. If you can, turn your run into a commute, and you’ll just do it without thinking.
3--Find people to run with, and enjoy the conversation and friendship.

How does running & fitness improve your life on a daily/weekly basis? I still feel physically young, even at age 61. I’m meeting people through informal group runs, and local races, especially weekly 5Ks and similar races. I have no health problems that I’m aware of.