PROFILE--Barbara Latta has been running (and streaking) for 36 years 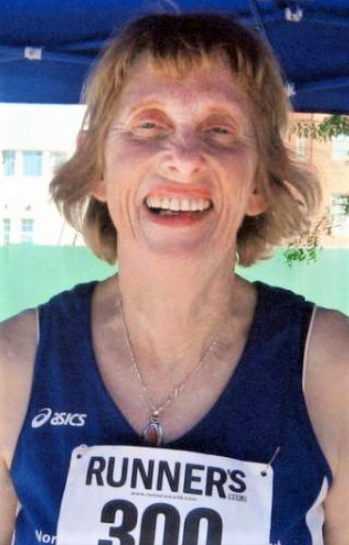 (May 2020) Barbara Latta has the second longest women's running streak in the world, having passed 13,300 days in a row (almost 36.5 years). She has run on every continent and in 55 countries. In her missionary work, she has landed in some dangerous places, requiring creativity. She ran on rooftops in Haiti, porches in Cuba and recruited the Ambassador to Lebanon as her running partner in Liberia. Latta, 78, from Raleigh, North Carolina, is also a member of the Citizens Emergency Response Team, a group of volunteers who are trained to help first responders in a major emergency.


Career/Profession: I am a retired elementary school librarian as well as a college reference librarian. But I have never retired
from running. I still get up at 5:00 am to run.


When did you start running and why?  December 1983 (DOB 1941).  One day after school I suggeseted to my sons that we should go for a run, and neither of them thought that was a good idea. So I went by myself, and ran 1.5 miles. I told my principal, who was a marathoner, and he said, “That’s good. Run every day, don’t stop. If you miss a day, then you won’t go back.” Soon after that, my brother Charles gave me a pair of running shoes as a birthday gift. He had started running and I thought that I would join him.  That’s when I started racing.

Another memorable race was my first triathlon.  After the swim I was four minutes behind the first place woman in my age group.  After the bike race we were almost tied.  After the run I had won the race by four minutes.  I enjoyed doing duathlon races in Florida where we lived for 18 winters. 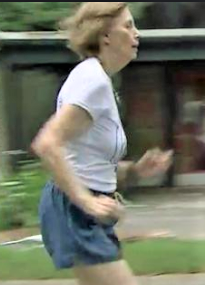 Did you have an early inspiration or person who motivated you?  My brother Charles was my inspiration.  Also my principal.  He ran 6 days a week for many years.  He encouraged me to run and to join him in my first race.

How much did you run per week in your peak years? For years I ran 6.2 miles every day. This was convenient and marked on the Greenway near my house. When I started running races longer than 5Ks or 10Ks I increased my mileage. I would do 10 to 13 miles on a Saturday morning.  I have been running the same Greenway almost every day.

How do you train now? Cross training? I train by just running.  I do not do a lot of stretching and other exercises. I enjoy biking.  I only bike once or twice a week and not that often in the winter.  I don’t do strength training but I probably should.
.
Has your diet/weight changed through the years?  My weight has stayed about the same.  I am 5’ 5” tall.  This month I weigh about 105 which is down a few pounds.   I think I was a little heavier when I was being a young mother to my two sons. I stopped eating meat (except for fish) around the time I started running.

I run with beginner runners to encourage them or sometimes I run with a friend who has a dog.  This requires many stops and a slow time.  I can adapt to the slower times and enjoy the social runs, but I am a solo runner at heart.  My morning run is my time to run alone and think about my running. I enjoy the quiet stillness of the early morning with only the birds, squirrels, rabbits and the deer.  I like to run through the dew in the grass and leave my footprint. I run around a lake and look at the geese sleeping in the water.  I cross a bridge and wake a blue heron that comes flying out from underneath. The aroma of the air is fresh and clean, and it is the best part of the day.  When I get to see the sunrise, that is just an added bonus of the joy of running. 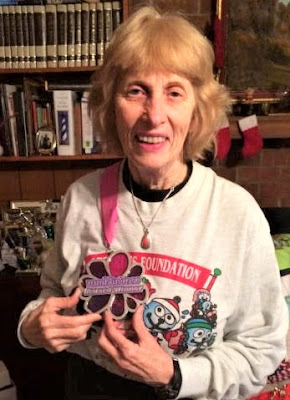 Obstacles along the way? I give God the credit for keeping me injury free.  I have had neither injuries nor illnesses to keep me from running.  I have great genes from my father who lived until 93 and my mother who recently died just shy of 95.

Running philosophy?  Run and smile every morning to feel terrific all day long.

How has running helped you with the aging process?  Running has helped me keep pace with younger friends who do not wait on me.  They expect me to keep up.  Running has given me the reason to get up every morning with a goal in mind.

What are the biggest lessons (life lessons and running lessons) you have learned? The lesson that life has taught me is to have a goal and reach for it.  I was a skinny, awkward, child growing up.  I played no sports.  I spent most of my free time reading books.  Running has helped me to meet more people and make more friends.

What three tips would you give to a younger runner who wants to run for life?
1--Make running your fun time for yourself.
2--Find the best time for your run that suits you and your family. I get up early and run before the rest of my family gets up.
3--Running is an inexpensive hobby. All you need are good shoes.
Email ThisBlogThis!Share to TwitterShare to FacebookShare to Pinterest
Labels: profile
Newer Post Older Post Home