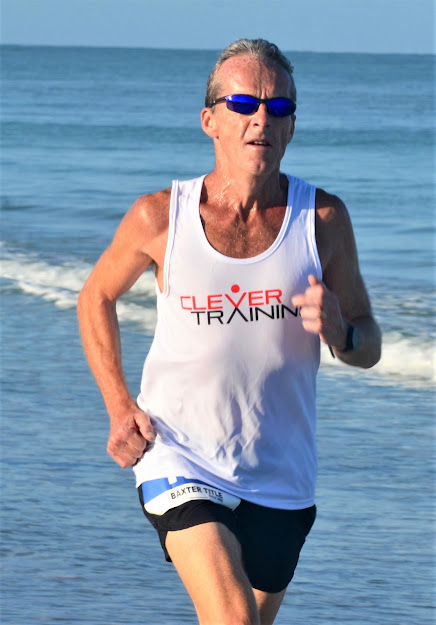 (July 2020) At 40, Dave Whiteside learned that he needed a hip-replacement. He waited 10 years, losing fitness and gaining weight, before he had the procedure. Then the former soccer player started running. The 60-yr-old from Indian Rocks Beach, FL, has been going strong ever since, with a marathon PR of 3:18. Recently--are you sitting down?--he ran 200 miles in a training week. A Keto diet disciple, Whiteside also hopes to encourage more hip-replacement folks to pursue an active and joy-filled life.

Career-profession: Computer professional for more than 40 years experience, covering everything from mainframe, client server and mobile apps. Started off as a computer programmer but now product management working for Watsco, an HVAC distribution company in Miami.

When and why did you start running? Oddly enough I didn’t “start running” until after my hip replacement

in December 2010. However, I played soccer for almost 30 years--as many as 4 full size games every week throughout the year. I started running to lose some of the weight I had gained when I was no longer able to exercise because of my hip, as just walking half a mile left me with a bad limp. I had always weighed around 165 pounds and 32” waist. But I had increased to almost 200 pounds and wanted to change it. When I was 50 I decided it was time to take control of my life again and have my hip replaced which I had put off for 10 years after being diagnosed bone on bone at the age of 40. My physician didn’t recommend that I run, but did say if I damaged it, he could fix it. That was the green light for me to try.

How much did you run in your peak years? If you consider my “peak years” as being younger, I probably only ran 30 miles a week between the soccer games and training. However my peak running years I think are still occurring. My peak years for 5K to half marathon distance was probably about 3 years ago before I switched to running ultra’s due to injuries. My average now is probably around 50 miles a week.

Top running achievements? For my 60th birthday this year, I was due to run Big Sur, something I had planned for several years. When it was canceled, I decided to raise money to help families in need during this Covid-19 pandemic. I chose to run 60 miles of bridge repeats crossing the Belleair Causeway Bridge near my house 80 times. Each crossing is 0.75 miles and about 75 feet of elevation. I started at 3 am to beat the Florida sun, and had friends from my running club join me for several bridge-crossings at a time. I also had friends and neighbors cheering for me at both ends of the bridge. I managed to raise over $12,000 for Feeding Tampa Bay, a local charity. It turned out to be the best birthday ever. I turned around the disappointment of missing Big Sur to something much bigger, more meaningful and rewarding than I could have imagined.

In January I ran the Long Haul 100, finishing ninth in a strong field with a sub-20-hour performance. My time was one hour faster than last year, and I believe I can do better. My goal each year is to win three races and set a course record in one of them. If I can continue to do that, I know I’m still improving.

Current training and cross-training? Normally I run about 50 miles a week, but since the Covid-19 pandemic started, I’ve reached new highs of 75, 92, and 100 miles in a training week. Little did I know then that six weeks later, I’d hit 200 miles in a week while running the Great Virtual Race Across Tennessee. I also ride an ElliptiGo, do open-water swimming, and attend boot camp once a week. 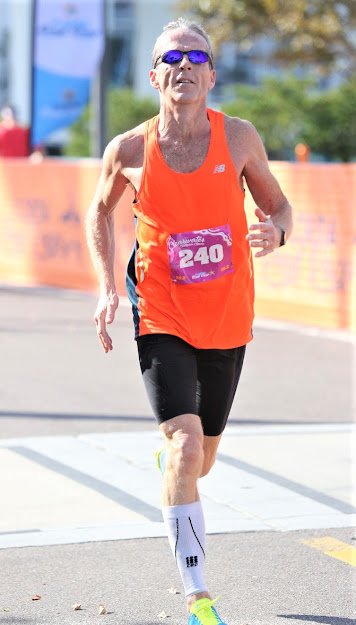 Recent races? In April I ran a race called 8 Hours Of Hell. It gets its name because we start at 10 and run until 6pm in the Florida heat and humidity. I won this race with a distance of 48.4 miles, just 0.4 miles short of the race record.

Does getting slower bother you? I might be a little slower in 5Ks and half marathons, but I think I’m getting better in marathons and ultras. I still have hopes of breaking my 3:18:28 marathon PR which I set 2 years ago in Leavenworth, Washington. My motivation comes from trying to beat the younger competition and hearing them say “I want to be like Dave Whiteside when I get old.” It’s a wonderful feeling.

Diet and weight changes? I switched to a Keto lifestyle three years ago. I researched many diets, and felt that Keto would be easiest for me to follow. Plus, I liked its anti-inflammatory nature. After going Keto, I dropped to 150 pounds. The lighter weight helps my hip, and helps me run faster. The only supplement I take is magnesium.

2--Don’t get addicted to your watch. Run by feel.

3--Don’t race too often. Give your body lots of rest and recovery.

Your philosophy of life and running? I have a stressful job and when I’m working, I’m 100% focused on work. Running is an escape from that. I don’t listen to music, I just enjoy the run. Running is as much a group sport as an individual sport. I’ve trained with many other runners. We motivate and inspire each other.

When I had my hip replacement, I was advised not to run, but I decided I wanted to enjoy my life to its fullest. I can always get another hip, but you have only one life. I want to encourage others with hip replacements to see and believe they can accomplish things--and enjoy life--as they never believed possible.