(Jul. 2020) By one count, Helen Sabourin has been running for 40 years. By another count, just 16 years. But who’s counting? By any tally, she’s remarkable, with a recent 4:28 marathon at age 77. Born in Alberta, Canada, in 1941, Sabourin’s first sport and passion was skiing. In fact, she married a ski instructor. She caught the running bug late in life (39), and despite her reluctance to be profiled here (“I am not worthy”), no one reading about her will agree. Sabourin currently lives in Gibsons, a small town on the Sunshine Coast (misnomer, it’s a rainforest) accessible only by a 40- minute ferry ride out of North Vancouver, or by plane or boat. She sometimes tells her senior running friends that no one else cares about them. They nod, laugh, and, she says, “agree that we will keep running until we can’t.”

Career-profession? I retired in 2008 after working most recently as a medical transcriptionist at our local small town medical clinic. My current favorite job

is being grandma to my ten grandchildren and three great grandsons. Along with my five children they are my most beloved accomplishment in life. None of them are serious runners, but one son and one daughter run a little. They are all incredibly supportive and proud of their old ma and grandma.

How and why did you start running? I started running in 1980 at the age of 39 while living in Edmonton. I had started noticing groups of hip, fit-looking gals and guys running through the North Saskatchewan River Valley trails and along the nearby streets, and wanted to be one of them. I put on my racquetball shoes and ventured out with extreme self-consciousness to merge with the flow of runners. That was the beginning and I loved it. This led to my first race, a 10K, on my 40th birthday. I was surprised when I placed 2nd in my age group. I also ran the Canadian Pacific Air 11K, which the following year became the first Terry Fox run.

At this time I was a smoker (since the age of 16). I would quit for two weeks before a race. I wasn’t a big smoker, mostly after dinner, but awful, I know. I finally quit for good in 1995. 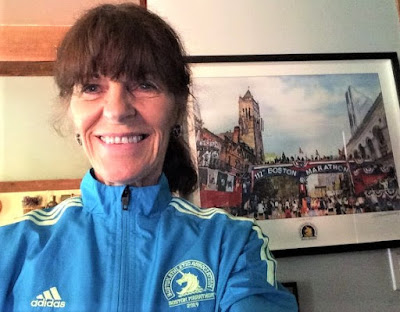 Eventually I had a knee injury and quit running. My return to running came 22 years later in 2004 when I was 62. The staff at the medical clinic where I was working was putting together a corporate team for the Vancouver Sun Run 10K and they needed one more runner to make up the required 10. I mentioned in passing that I ran when I was younger, and I was immediately invited to some training runs. I reminded them that I was 62 and long past running, but I was talked into it nonetheless. With that reassurance, I joined the training runs and we all ran the 10K three months later. I was hooked. In 2007 at age 66 I ran the Vancouver Marathon. To date, I’ve run 24 marathons including eight Bostons. I love the marathon even though it is not my best distance.

Best-proudest-memorable accomplishments in running?  My first Vancouver Marathon in 2007. Just the act of finishing the uncharted 26.2 mile distance was exhilarating, and I was over the moon with an unexpected BQ time of 4:29, 16 minutes under the 4:45 needed for F65-69 at that time.  I also got picked in the lottery to run the 2007 New York City Marathon, which is another story altogether. For me, coming from a small Canadian town to navigating the NYC subways, the ferry to the start and waiting for hours in the Athlete’s Village in dark, windy wet conditions was overwhelming. But I loved the spectators and running that marathon.

Second most memorable race was 2008 Boston. I travelled by myself from Vancouver and managed quite well. Riding the bus together to the Athlete’s Village was quite an experience, being stuck in traffic with a busload of full-bladdered runners for an hour and a half. I was happy with my 4:24 but made many mistakes, one of which was taking Gatorade and not knowing it would set my stomach on fire. The sheer joy of participating in the iconic race stayed with me throughout to the finish line. What a high!

Third most memorable was the 2018 Victoria Marathon at age 77. I was undertrained due to injury and only wanted to finish. I started off slowly, stayed at a comfortable steady pace throughout, and felt good all the way. I finished strong with a time of 4:28:44, which was a negative split of over 3 minutes, and a BQ by 36 minutes. It was my best-run marathon. 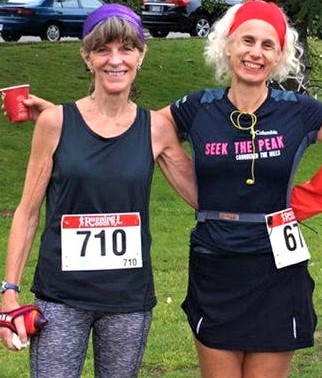 Current running and cross-training? I would have to say I am a minimalist. I never run more than 32 miles a week during marathon training and only three times a week. Any more than that results in injury. I often travel to Vancouver to train on flats which we have a shortage of in Gibsons.

I do little cross-training. In the summer I do “natural cross-training” of intensive outdoor work in my yard which is probably why I do better in fall marathons than spring. Other than that, I have a stationary bike that can be used in the winter when the roads are too snowy to run on.

Diet and weight change? My weight has fluctuated from 135 when younger and not running to 115 at present. My shrunken height is 5’6” from 5’7.5”. I don’t gain weight at this point of life no matter how much I eat, and I have a good appetite. Growing up we never went to restaurants and never had fast food or takeout and that has pretty well defined my life. (I calculated I have cooked around 19,600 dinners over a period of 56 years). We eat a wide variety of meat, poultry, fish, dairy, vegetables, whole grain carbs, some fruit but not a lot due to acidity, and dessert always. I take Ester C, Vitamin D and calcium supplements.

Social Running?  I don’t do a lot of social running. We do have a local running group, which I joined years ago, but most of those runs involve driving to the next town. I prefer going out my front door and running wherever and whenever, at my own pace. For me it means freedom to listen to music, enjoy the scenery and wildlife, breathe in the fresh air, and all the time to think, ponder, and plan. It’s sheer joy.

Injuries or other health obstacles? Of course there are injuries. Over time you learn how to avoid them and when they do happen how to deal with them. Mine are usually plantar fasciitis, Achilles, knees, and hips (trochanteric bursitis and obturator internus, muscle inflammation). My self- treatment involves REST plus a pair of old, klutzy men’s Brooks Ghosts which I’ve manually added more cushioning to. These work miracles with plantar fasciitis, knee and hip problems from road camber, and allow me to run carefully and slowly without further damage. Also cold packs, heating pad, ointments, and tensor bandaging - they all work. I have tried yoga, but always get injured with the twisting involved. So basically, I don’t stretch.

I have severe osteoporosis caused by a parathyroid tumour. After surgery to remove the tumour in 2018, I feel much better. I’m hoping I can rebuild some of the bone loss or at least halt it. I am very careful to not fall.  Also have vasculitis of the temporal arteries, which is controlled by low dose prednisone.

A favorite quote?  “The Marathon. Often the joy is in the training beforehand and the memory afterward.”  I read it recently. It might be from a Boston Buddy.

How has running helped with aging?  Undoubtedly running has helped. At 79, I’m relatively healthy and still strong enough to manage heavy summer yard maintenance, which I attribute to the fitness from being able to run. My father died with full-blown Alzheimer’s at my age, and I have been waiting for it to fall upon me, but so far everything is good. I think that all that blood coursing through our bodies and brains when we run is perhaps a good thing in this regard. Also, I can stand tall when I walk because I run tall and so don’t appear to be as old as I am.

I don’t think I am exceptional at 79 because I run marathons. I believe that many seniors are physically capable of running any distance including marathons; they just haven’t discovered it.

1--If you truly love to run, you have been given a great gift, for the joy in running is the love of it.

2--You may become disillusioned, but don’t give up. Take any disappointments, and know and believe that they will be offset by the successes to come.

3--Enjoy every moment you are out there.

What does running contribute to your daily life? Running is a great social and competitive sport with wonderful people taking it up. The Boston Buddies Running Club for example, besides being composed of accomplished runners of all ages from all over, are intelligent, helpful, kind, caring, charitable, funny and fun. I have learned more about running from joining this Facebook group a little over a year ago than in my previous years of running.

I have also learned that the only runners who are interested in older runners are other older runners. I say this with tongue in cheek to my senior running friends as we stand and wait for the end of the awards ceremony when there are only a handful of us left. Then we all laugh together, and say that we are thankful we are still here and still running. And that we will keep running until we can’t.