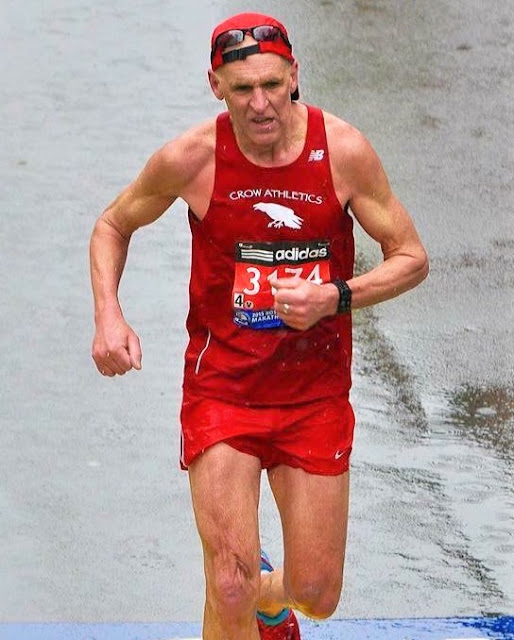 (Dec. 2020) Gary Allen has been described as a wacky and fun-loving runner and favorite son of Maine. Home for Allen is a tiny offshore island called Great Cranberry. His family settled there in the late1600s making him a 12th generation family man. The main road is only 2 miles long, which is a fairly ridiculous place to become a long distance runner. Allen is one of three dozen runners worldwide to run a sub-three-hour marathon in five different decades (the only woman in that club is another Mainer, Joan Benoit-Samuelson).

With his long lean frame and megawatt smile, Allen holds court anywhere he goes. He’s the founder of the Mount Desert Island Marathon and the Great Run, a six-hour ultramarathon where competitors simply run back and forth on Great Cranberry Island  - remember, only 2 miles long - as many times as they can.

Allen, 63, also is credited with saving an impoverished Maine town, Milllinocket, by creating a marathon there. It runs through the Maine North Woods in the middle of December. It's an unlikely destination race, but when Allen puts out the call, runners respond. One of his mantras: "Create something amazing." He has achieved this several times over.

Career-Profession? Hmmmm. I have always been an entrepreneur of sorts so classifying what I do as having a beginning or an end, such as retirement is more abstract to me

than Elon Musk working at a fast food place. I do everything I want from lobster fishing to digging a well with a shovel, to creating two of the most unique marathons in the US. So I guess my profession is a Dreamer, and it has been the best career ever. My dream jobs have included a lobster fisherman, boat builder, yacht captain, auctioneer, carpenter, farmer, plumber, electrician, coach, race director, bicycle messenger, motivational speaker, and woodsman.

When did you start running and why? I started shortly after Frank Shorter won the marathon in Munich in 1972. My first team was XC in September of ‘72.

What are you most proud of in your achievements? Running wise, that I decided on a whim to run from Maine to DC in 2013 in the dead of winter (705 miles in 14 days). That I have run 68 career sub-3s in five different consecutive decades and helped inspire hundreds of kids over 13 years as a XC coach. That I decided to create my own recipes for training and racing and that I have always kept it fun. That only made me want to run more, and anyone knows the more you run the better you get at running!

Oh, and I was named ‘Race Director of the Year’ in 2018 by Road Race Management and inducted into the Maine Running Hall of Fame. Finally, I am proud of creating the cutting edge free Milliinocket Marathon here in Maine that has been credited with helping to save a struggling region of our state.

Pet peeves? I don’t like skeptics. I prefer people who dream big!

Guesstimate the number of lifetime miles you’ve run. Def well over 100,000. It’s of course an estimate because many years ago I stopped counting miles once I realized that these numbers are mostly meaningless and the only stats that are forever happen on race day.  I mean who has ever been in the heat of competition grinding up heartbreak hill and tapped the runner next to them on the shoulder and said, "I have averaged 73 miles a week for the past 20 years." It just does not matter. To me it’s like counting and cataloging how many breaths you take in a day versus just living in the moment.

What were some of your better/memorable races? Oh gosh, my first time cracking three hours in July 1978 at the Paul Bunyan Marathon here in Maine was pretty epic. I also qualified for my first of 24 Bostons. I loved getting under 2:40 in at the New York City Marathon in 1988. The 2:58 I ran in 2014 in the Boston Strong edition after the bombing was a stirring moment for me. Oh, and I ran a spontaneous 50-miler (my first ultra) in 1982 finishing in 6:21. People at the finish sure seemed pretty excited!

Did you have an early inspiration or person who motivated you?  Fred Lebow inspired me to become a race director when I ran NYC for the first time in 1980. I had read all about him but that morning on the start line I saw Fred with a bullhorn waving his arms around and to me it seemed like he was conducting a symphony! I remember a true “light bulb” moment where I thought, I need to be him and bring this back to Maine. I remember being so damn excited during the actual race that I felt like my feet never touched the ground and recorded a 2:48 which got me into Boston again. (You had to crack 2:50 back then).

Once I became a race director I’d bring a medal from my marathon to Fred’s statue at the NYC finish. Many pics exist on the web of my medal around his neck. Just me thanking him for the inspiration!

How much did you run per week in your peak years? Now?  I'm not a fan of counting but I ran 70-80 a week year round with many over 100 back when I was counting. I even jacked it up to 120 cause I heard Bill Rodgers did. Now I run as far or fast as I feel like on any given day/week/month. I honestly don’t know a number.

Cross Training: If yes, how?  Not as part of training but plenty of hard physical work makes you into a freakin’ animal for running. Like digging wells with a shovel, lobster fishing (that will make you tough as nails) farming and basically just living in Maine.

Has your diet/weight changed through the years?  I don’t think so. I wear the same size clothes. I eat whatever I want.

How important is social running to you? Not important at all. I have run most of my lifetime miles alone. I think today’s runners are a little soft, always looking for company as if they can’t do it alone.

Obstacles along the way, injuries, etc. Oh gosh.  An obstacle that you remember has for all intensive purposes won. I prefer to think of everything – obstacles, injuries - as a reason to work harder and not as a hurdle to overcome.

A favorite quote: “Run like hell and get the agony over with.”- Clarence De Mar

Running Philosophy? My life philosophy is my running philosophy: Don’t be a spectator.

Has running helped you with the aging process? Haha! I act like I’m. So yeah I suppose so!

What are the biggest lessons you have learned from running?  That you can hold your hand on a hot burner much longer than you think.

2--Run in different places; mix it up.