PROFILE--Sam Cox has been running for 49 years

(Feb. 2020) Sam Cox started running in 1972 to get in shape for football, but soon realized that a running-focus made more sense for him. Six years later, he completed his first marathon, and almost qualified for  Boston. The next year, he did qualify, running a 2:48. He would eventually reduce that time all the way down to 2:30:58. Now 62 and living in Greensboro, NC, he still logs 40 to 45 miles a week, and races marathons despite foot problems (Haglund's) and a history of atrial fibrillation. "I am grateful to be out there running, slow or not," he says. "Nothing clears my mind, reduces my tension, fosters my creative side, allows me to think, to ponder, to pray, or to imagine quite like a good run."

Career-profession? I graduated Wake Forest University in 1981 with my BS degree, where I walked on to the cross country and track teams and ran my sophomore and senior years, and was on an Army ROTC scholarship. Following graduate work at the University of South Carolina (MS) in 1983, I served five years in the army in San Antonio and Germany. I then began a career in education (while working part-time in the Army Reserves, retiring in 2002), picking up additional graduate degrees at Oregon State University (1991) and The College of William & Mary (1993) while teaching history, coaching cross country and track, and then moving into educational administration. I spent the past 25 years

in K-12 independent school leadership, and the past two decades as a Head of School. I retired just this past July (2020) from my leadership role and currently work as an educational consultant for independent schools and have begun work on my first--of what I hope to be several--books. The first book is Holocaust related.

When did you start running and why? I started running in 1972 at the age of 13 to get in shape over the summer for football. I played football in middle school and high school, and began running track in grade 8. I was a mediocre football player and a mediocre middle-distance runner “specializing” in the 880. In spite of my lack of great success, I quickly became a running fan, following Jim Ryun, Frank Shorter, and the legends of the ‘60s and early/mid ‘70s.

My freshman year in college I gradually increased my weekly mileage from 20 miles to 60 and an upperclassman told me I should run a marathon and try to qualify for Boston. In those days the standard was sub-3:00 and you could enter just weeks before the race. I chose the VA Beach Marathon on March 18, 1978--as a freshman in college and attempted to run my sub-3 in that first race. I was on pace through 20-miles but became acquainted with “the wall” I had heard so much about and crossed the line in 3:05:48. It was a painful experience but I was hooked and continued training and racing over the summer between my freshman and sophomore years of college. As a Wake Forest xc walkon, I quickly discovered what D-1 collegiate running was like! I finished that first as something like the number 17 or 18 runner of 20 or 21. I was not competitive, but I loved it.

Can you guesstimate your total lifetime miles? I estimate somewhere in the 105,000-110,000 miles range over nearly 49 years. From 1978-1994 I ran every day for sixteen years before an injury caused me to miss a day. I kept very accurate records from 1977 until the early 2000s, but it is more of an estimate since then.

How much running and cross-training are you doing now? I run 40-45 miles per week--when not injured, taking Mondays and Fridays off, so five-days per week of running. I continue to do one long run weekly and hit the track for speed work every Tuesday morning, though it is a stretch to call it “speed” work these days. I do a short 20-30 minute weight workout 2-3 days per week, occasional hiking with my dogs, and occasional cycling. I stretch a bit, but not nearly enough. I used to XC ski, and would like to take it up again but living in NC you have to typically travel to do it.

Does it bother you that you are slower now? I’m not so bothered being slower as I realize that it is inevitable. However, I am troubled to slow so much the past few years; I would like to get back under 3:30 in the marathon and to have knees that don’t hurt so much. I am inspired by my running friends who keep plugging away and running consistently in spite of age. But I have been told by several orthopedic surgeons and a couple of cardiologists that my running days should be over and I should find another pastime. I don’t listen to them and I am grateful to be out there running, slow or not.

Diet and/or weight changes? From the age of 19 until age 40 I weighed 137 lbs (I’m just under 5’8). In my 40s I weighed about 142, but the past 10-12 years I’ve typically been about 160-163. This weight gain definitely slows me, and puts more stress on my aging knees as well. I take a multi-vitamin, Vitamin D, and a daily aspirin but otherwise no supplements other than ice cream and hot, out-of-the oven chocolate chip cookies. These “supplements” are a reason why I have an additional twenty pounds.

What injuries or other health issues have you faced through the years? How have you dealt with these? I was blessed to be injury free in my teens, twenties, and largely through my thirties and early forties. In 2006, at age 47, I developed severe Achilles Tendonitis and Haglund’s Deformity in my right foot/ankle. My Haglund’s (calcified bony growth on the back of the heel) was the size of a golf ball and after all sorts of treatment and therapy, I could no longer run. In 2008 I had surgery to remove it and was in a cast for 6 weeks, followed by a boot for six more weeks, and it was 11 months before I could run pain-free. I had the left side done in 2011 after developing the same thing. The doctor said I likely would never be able to run marathons or long distances again even with the surgery, but in 2012 I ran a 3:21 marathon. I’ve run six or seven marathons and a number of half-marathons since then and have no more problems with the Achilles.

Several years ago I developed Atrial Fibrillation, and in January 2019 had a cardiac ablation. I’ve had no more A-Fib, but my aerobic capacity has not returned quite to the same level as before.

An inspirational quote or two?  “And let us run with endurance the race that is set before us, looking to Jesus, the founder and perfecter of our faith” (Hebrews 12: 1-2).

To the stronger or faster man;

But sooner or later the person who wins

Is the one who thinks he can.” (Walter Wintle) 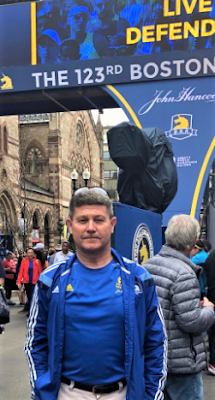 How does running & fitness improve your life on a daily/weekly basis? Running has helped me maintain a lifetime of fitness and health, and also is mentally therapeutic. Nothing clears my mind, reduces my tension, fosters my creative side, allows me to think, to ponder, to pray, or to imagine quite like a good run. In our fast-paced, high-tech, information-now world in which we live today, we’ve often lost the sense of wonder, the ability to use our imaginations. Running (along with reading) are great ways to stimulate that.

What are the biggest lessons (life lessons and running lessons) you have learned from running? I am not a naturally patient person, but running has helped teach me the important lesson of patience. Running also is a great testament that success is largely measured by the amount of work and preparation you put in on the front end. Good things come to those who wait.