PROFILE--George Hancock has been running for 47 years 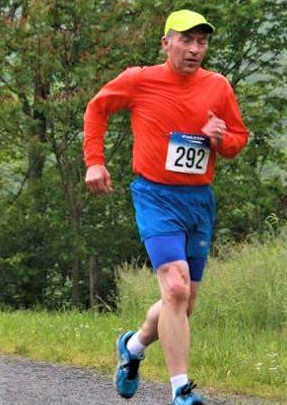 (Feb. 2021) George Hancock is the honorary founder of the U.S. Streak Running Association, and has a couple of impressive streaks to his name. One lasted 24+ years, another 15+ years. And when he required disc surgery in 2018, did that stop him? Nope. His latest streak is 2+ years and counting. He's learned how to stride smooth and back-pain-free, and figures he'll continue doing the same well into his 70s. Now 67 and living near Johnstown, PA, Hancock notes: "I can look back and say, 'Yes, you can. One simply has to try.'"

Career-profession: 1975 graduate of the University of Pittsburgh at Johnstown (UPJ). Worked in retail from 1976 through 1993 for a local retail firm, no longer exists, company was purchased and closed in 1993. Since then,

I was employed until my retirement on November 30, 2016 by the University of Pittsburgh at Johnstown--last 5 years in the Registrar's office. My main job besides helping students was creating and maintaining the academic class schedule using Pitt’s software. This was fun. I enjoyed the interaction with Faculty, Staff and Students.

When did you start running and why? Played football in junior high & high school, track team in high school, a decent runner, ran the roads before every season. Never had any running issues, was short, lightweight & could hold a pace well Began running again in 1973. As a UPJ student, had the time, running was fun & easy. I enjoyed seeing my results with overall health & fitness

How much did you run in your peak years? The highest weekly mileage was 80 per week, averaging 70 to 80 miles a week during peak years 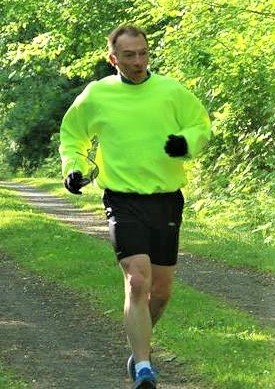 I am the honorary founder of the United States Running Streak Association (USRSA)--an organization based on my running streak research and many written articles, particularly for Runner's Gazette. I have also written a book, My Running Odyssey.

How much are you running and cross-training now? Running 30 miles a week now, daily stretching, and a few planks.

Any recent racing? No. I retired from road racing in October , 2017, due to several herniated discs.

Does it bother you that you are slower now? As I aged, I saw my times slowing but it didn't bother me cause the new generation was winning at much slower times than I had run decades earlier. Locally, the death rate in my non-running age group is very high, so that's my prime motivator these days. To keep running, keep moving stay healthy. I have five younger siblings, but many think I look younger than several of them, and I never correct that assessment.

Diet and weight changes through the years? When I turned 60 I noticed that my metabolism changed. Since then, I'm very careful to eat smaller portions. I never weighed over 167. I'm 155 now. I don't take any supplements.

What injuries or other health issues? I learned 10 years ago I have low thyroid, and I have a genetic cholesterol issue. I take low dose medications for both. Currently I'm adapting to three herniated or broken lumbar discs from genetics, work history and rotten luck. My neurosurgeon said my daily running kept the problem from getting worse. After surgery in July, 2018, I resumed running on September 1, 2018, and worked up to 30 miles a week. I hope to stay at that level into my 70s.

3--Read, study, and leaern about our sport's history.

How do running and fitness improve your life? I look forward to every new day. Every run is a road adventure. I get to run through the four season, viewing fantastic sights. Running keeps me fit and trim. And for me, running gives me numerous writing topics.

What are the biggest lessons you have learned from running? Running every day taught me goals are completed one step at a time. Running taught me that it's possible to complete any goal, task or assignment. Running every day is fun, soothing. I run because I can. Recently found out that even with broken discs I can run well. Now after 47 year of road running I can look back and say: Yes you can. One just has to try.