PROFILE--Roger Robinson has been running for 62 years

(Mar, 2021) Roger Robinson is a runner with many years, races, and wins under his belt. He is also a writer who keeps the history of our sport alive and well through his deeply researched, witty and thoroughly enjoyable books. He is well known on the speaker circuit and is a stadium announcer. Robinson has a sense of humor, too. When we asked him if running has helped him deal with the aging process, he responded, "I'm only 81 so it's too soon to say." He splits his time between Wellington, New Zealand, and New York State with his wife, Kathrine Switzer.

Tell us about yourself.  I like to live a balanced life. With a career as a professor and writer, I've also always been active as a runner. I'm no rustic but I couldn't live an entirely indoors life. Running on all terrains and in all weathers is part of my being. (Hence no treadmills or gym workouts). I was born in England, moved to New Zealand in my twenties, and ran world championship cross-country for both countries. First marathon was at age 41, and I ran well as a master (marathon PR 2:18:45; 2:28:01 at 50). World titles (10K and Cross-Country) at 41 and 50.

Wellington and New York State, another nice balance. I retired from University work in my early 70s, so am now Emeritus Professor, but work enjoyably as a running writer, with six books and one in press. I also work as a running journalist, stadium announcer (including two Commonwealth Games) and TV or radio commentator - anything that involves finding the best words to describe and interpret running. One remaining mission in life is to earn recognition that good running writing can be of real literary value. I believe my last book, When Running Made History,  attained that, and so does my next, working title Running's Greatest Stories (due Feb 2022).

Career/Profession? I was a University professor of English literature, a profession where you try to do three full-time jobs at the same time – teaching, research publication, and management. I was eventually Academic Vice-President (in American terms) although my main loves were good teaching and writing.  I always fitted in my lunchtime run (being Head of Department meant I could shape my own timetable) and from teenage on I also moonlighted to write about running for newspapers, magazines, and eventually books. Since official retirement, I am mainly a writer on running. But I still love reading great books and I'm a compulsive literary critic – so I'm programmed, for instance, to read between the lines of all political posturing, or promotional fatuities, or dumbed down running writing that I call joggerfroth.

When did you start running (month and year) and why? I was born in 1939, in England, so I came to consciousness being bombed in World War 2 and in the austerity years after.  I have told that story in When Running Made History. l was always dead last in 100 yard races at elementary school, but enjoyed watching the 3 miles at the local track, which was open to the public on Sunday mornings. So when I was nine, one Sunday I ran twelve laps, 3 miles. My mother always said I spent that Sunday afternoon in bed. That often happened in later years, too. I began to identify as a runner at 13, at high school, when a group of us started a cross-country club, partly to escape rugby, but also because we loved running on Wimbledon Common. That was it for life.

What were some of your better/memorable races? The competitive runner's mindset is always that you will improve, so in a way you're never totally satisfied. It's much the same being a writer. But my nearest to three perfect races against very strong competition were (1) winning the 1967 British Universities Cross-Country Champs (equivalent to NCAA) in lots of mud; (2) winning the World Masters (40-44) 10K road, when I got the tactics exactly right (broke them on a hill); and (3) my Boston Masters record, 2:20:15 in cold sleety wind in 1984. See the “Boston from the Inside” chapter in Heroes and Sparrows.

Not a clue. Not something that interests me. Nor does “streaking,” or collecting countries or marathons or whatever. I'd rather plan and train to run one good race than collect 100 races a year, or some meaningless total of miles. I'm not a numbers man. Races interest me, and times only because they can indicate how well you have raced. My journalism colleagues have learned not to trust me with times or splits. I can scarcely remember my own PRs. As a student, I often trained with a super-powered mathematician (he ended up in Silicone Valley) and I used to ask him what my best times were.  As a University senior manager, I always prominently took my “Hello Kitty I Can Count” calculator to multi-million budget meetings.

Did you have an early inspiration or person who motivated you? I describe two big ones in When Running Made History. (1) Emil Zatopek's 10,000m gold medal in 1948, showing me at age 9 that it's not how good you look that matters but how your legs move; and Murray Halberg's 5000m  in 1960: “As a runner born with no fast-twitch fibers, who would never win any race on the finishing sprint, I was watching a man win in a way that might perhaps be my way...” I wrote (i.e. get away early, before the sprinters smell the finish).

How much did you run per week in your peak years? Now? At peak, age 24–55, 70-90 miles a week. Interesting you don't ask for more detail. The key was long race-pace intervals – 4 x 10mins, say, or 6 x 5mins. “Quantity of quality” is my principle, so if your big race will take 40 mins, you need to build up to 40 mins of race-pace training. With my lack of speed, repeats of 400m or 75sec was always an essential session. Tempo runs were also in there, perfect to make good use of lunchtime. Looking back, I should have added more long runs and more weekly miles, but I was too busy with work to put in more time. Now, it's 5 hours a week, when not injured, more if I can get up there without injury. Otherwise walking.

Cross Training: If yes, how? Walked upstairs several times a day (my office was on the Eighth Floor, great for the cardio-respiratory). Lectured to 300 students (50 mins sustained energy and focus). Played with the cat (always exhausted before she was). Sunday afternoon nap. I do that form of cross training daily in recent years.

Has your diet/weight changed through the years? Of course. In a London war and post-war childhood, food was seriously scarce (see When Running Made History Chapter 1). Later, running 80 miles a week, much of it very hard, requires huge intake (“stoking the boiler” one astonished girl-friend called it), and leaves you at minimal weight. Motherly women always saw me as a challenge. My wife once described me as a labrador retriever. Old legs simply can't sustain that output of work, so the intake of food drops and weight increases, though not seriously so far. We eat only quality food (now we can afford it), but I refuse to “diet.” It's bad enough not being able to run as much as I'd like, without making myself miserable by dieting. 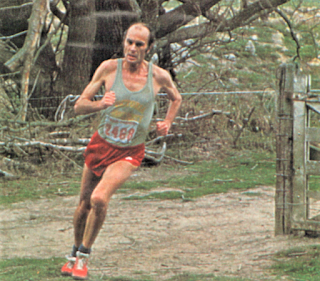 How important is social running to you? If you were/are a competitive runner, can you adapt to the slower times? I don't accept any difference between “social” and “competitive.”  In my experience, it's competitive runners who are the most social – perhaps because they truly love the sport.  And they keep that love. I still happily hang out with many who were trying to race my nuts off 50 years ago. Hard training sessions have been some of the best social experiences of my life, much more lively fun than a stand-around small-talk drinks party.  You can run hard with someone, quite different from running against them. As for adapting to times that get slower with age, there's not a lot of choice, is there?

Obstacles along the way: Yes, inevitably. Most serious were a broken foot bone in 1969, and deteriorating knees after age 55, with eventually two replacements. But I've proved you can resume running, even racing, if you build up carefully. On the positive side, I was lucky, with the flexible hours of my profession, which made daylight training almost always possible; and with the running-friendly places I have lived; and with the great friends I have been able to run with.

Through the broad bright land.”

This is from Charles Hamilton Sorley's fine poem “The Song of the Ungirt Runners.” In Running in Literature, I published the only full account of that poem, establishing its origin in the period when Lieutenant Sorley went out running with his men during training for the trenches in World War 1. By the repeated “we,” I suggested, the poem affirms a human bond at a deeper level than military rank, a bond that all runners know, as well as love of the land itself.  His team won the inter-regimental championship. Soon after arriving at the front he was killed by a sniper's bullet, age 20.

I run because I like it, the simple, rhythmic, effortful movement over the earth. There's a good paragraph on “motives and rewards” in Heroes and Sparrows.  Concise version:  I run for the feel of the textures of the earth under my feet, for the variety it puts into my life, for the friendships it gives me, but also for the privacy; I run for the intense drama of the race, to be part of the history of running, I run for what Yeats called “the fascination of what's difficult,” and I run because I enjoy being shouted at for trespassing on golf courses.

Has running helped you with the aging process? I'm only 81 so it's too soon to say.

What are the biggest lessons you have learned from running? (1) The more you put into something, the more reward you will get. See below, Do the work. (2) Pace yourself. What matters is persistence, and actual achievement, not blazing away at the start or looking good on camera.

(1) Do the work and you will improve. Never mind shoes and diet and gizmos: do the work, it's so simple. And hugely rewarding. Nothing is better than a successful race or a hard and sociable training session.

(2) By running, you are now making friends who will last your whole lifetime.  And because they are runners, they are interesting and substantial people. That's the best investment for the future you could possibly make.

(3) The big one. Read about running. Buy good books, especially mine (and Gail's and Amby's. But mine first). With all the time you commit to running, understand what it is that you're doing. Read about what it means, as well as how to do it. You are part of an important movement, with a great history and quality literature. Contribute to that culture, by buying good running books.