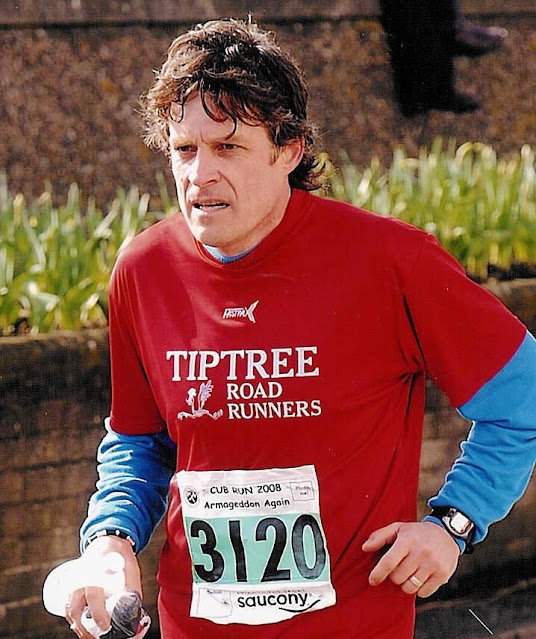 (May 2021) Rob Hadgraft is a British runner, journalist and book author who has written books about historic runners quite a bit faster than he (Alf Shrubb, Deerfoot, etc). Now 65 and living in Colchester, U.K., he reports that he has a half-marathon best under 1:20 but "never had the patience or aptitude to do well for the full 26.2." Instead, he chose to run 20 to 30 miles a week and enjoy various club and regional races. Like the one where he suited up next to Seb Coe. He'll also happily tell you about the benefits of beer for runners.

Career-occupation? I worked as a news and sports reporter, sub-editor and editor for UK and European regional newspapers and briefly in corporate public relations before turning freelance to write books and features on sports history.

When did you start running and why? It began for me in 1981 when

a group of us young journalists (all running virgins in our twenties), ran an unofficial marathon across the county of Suffolk, to raise funds for a local woman whose husband was killed at work leaving her with a young family to bring up alone.

It went surprisingly smoothly, so afterwards I bought myself a proper pair of running shoes, did some solo training runs and looked around for other events. Tried a 5k mass fun-run in Central London and found it liberating to run fast after the slog of that marathon. I so enjoyed the physical sensation of running fast and passing people that I quickly became hooked and gave up football in favour of running. Enjoyed the fitness it brought and the way it was relatively simple to fit in bits and pieces of training in the week and find a race every weekend. It became a life-time routine, but never a dull one. 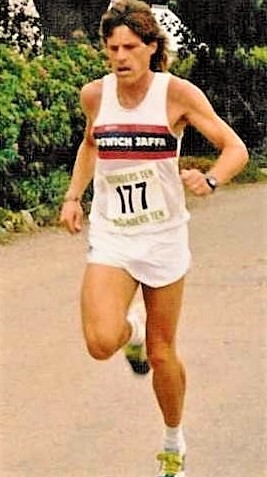 How much did you run in your peak years? For many years I ran four or five times a week, including a race at the weekend. I was never a mileage freak, and functioned happily on 20-30 miles per week. Any more intense than that and minor injuries would creep in. The most I ever did was 55 in one week. For quite a few years I was doing 1,000 miles a year, which was consistent but not especially high compared to many club colleagues. That figure has dwindled greatly in recent years. The ageing process and injury have meant I can only do a fraction of that and now have to ‘manage’ things carefully in order to keep going.

What were some of your best running achievements? Doing 27:00 for a 5-miler (8k) at Clacton-on-Sea was a highlight (how I wish I’d saved one more second; as 26:59 sounds so much better!).Or maybe doing two 10K races in eight days, both timed at exactly 34:50, represented a peak? I managed 4:48 for the Mile once …. it was a special feature event at Milton Keynes with some big names involved, and I wasn’t too far behind Kenyan star John Ngugi at the finish. Beforehand, I changed into my racing kit right next to the great Seb Coe! However, possibly my best performance was at the famous annual Nos Galan midnight run in Wales on New Year’s Eve - here I managed to maintain a speed of fractionally over 5-minutes-per-mile over a very hilly route, inspired by the fantastic atmosphere. Went under the hour for 10 Miles several times, and sub 1:20 for the Half-Marathon, but never had the patience or aptitude to do well at the full 26.2.

Any estimate of your total lifetime miles? That number stood at just over 31,000 miles by April 2021. Sadly, it is now advancing upwards very slowly indeed.

How much are you running and cross-training now? I now have to carefully manage my running to protect a spot of arthritis in the right ankle and knee, which means keeping mileage low, and running mainly on grass. It also means I can’t really train with my club colleagues any more, or enter road races, so my main entertainment these days is searching around for a 5k Parkrun that is mostly off-road and flat, and letting the dog drag me round one of those! Others in my position might well have quit by now and taken up cycling or swimming, but I can’t quite kick the running habit. If I was a horse I’d probably have been shot by now!

Any recent races? Have done precious few races since 2018, but hoping to get back and do a few gentle Parkruns in 2021. I have accepted my competitive road and cross-country days are probably over. This does irk me, and I do miss the sheer buzz of fast running and the famous running ‘high’.

Have  your diet and weight changed much through the years?  At my quickest I carried about 145 pounds (10 stones 5 pounds) but now I am at least 15 pounds above that. Diet is reasonably good, with plenty of fish and very little red meat (only the occasional bacon sandwich!), plenty of fruit and veg, but possibly a little too much sugar, and too few alcohol-free days! 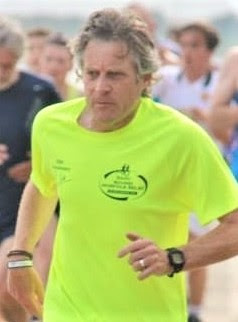 Back when I was running well nearly 30 years ago I probably had a slightly better diet and for quite a while took Royal Jelly supplements, but the only additive these days is glucosamine for the arthritis!

Injuries or health issues through the years? The arthritis has been the only thing to prove a genuinely limiting factor. All other issues over 40 years of running usually cleared up fairly quickly and were only short-term problems.

An inspirational quote or two? I’ve published half-a-dozen books about champion runners of yesteryear, and I rather liked a quote from one of these - the great Alfred Shrubb - who once told his fans: “I think beer is a great aid in training, taken in moderation. During all the time I have been racing I have found it a great help. Look here, it’s no use a man trying to run races on tea and soft stuff. It does him more harm than good. You must have something solid and muscle-giving in you!”

I also quite liked that Nike slogan from the 1980s: “There Is No Finish Line."

What three tips would  you give other hopeful lifetime runners?

TIP 1. You need steady mileage in your schedule for conditioning purposes, but don’t run hundreds of ‘rubbish’ miles simply for the sake of it. Distance is not the be-all and end-all! Too many runners seem to treat short runs like 5k as hardly worth getting changed for!

TIP 2. Variety is the key to enjoyment – Try different distances and terrains, and support local races. Putting all your eggs in one basket and building exclusively towards a single event that is many months away can be a dangerous business for the non-elite runner.

TIP 3. Don’t be too proud to slip down the rankings as you get older and slower! Keeping active is far more important than the minor disappointment of being overtaken by people you used to beat.