PROFILE--Hal Goforth has been running for 50+ years 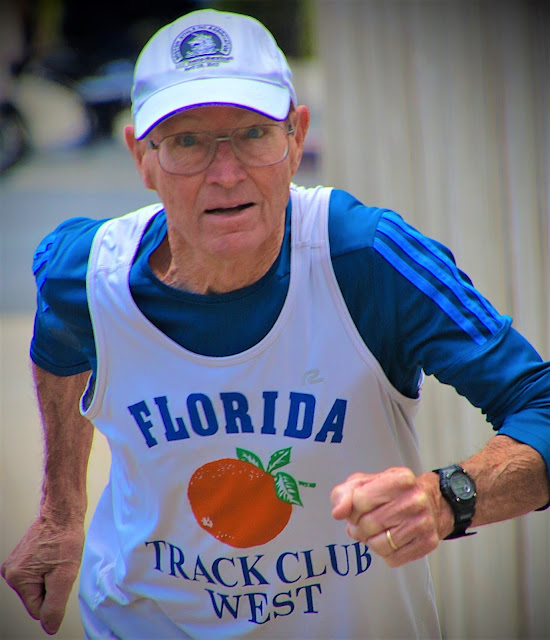 (Apr. 2021) Hal Goforth has a particular fondness for the Boston Marathon, which he has completed 39 times. He set his marathon PR in Boston in 1981 with a 2:28:33. In 1998, when 53.5, he won the 50-59 division. He has also been an eight- time winner of his age-group in the BAA Half Marathon. Now 76, Goforth lives in El Cajon CA, but also spends a month or two each year deep-sea fishing off the Florida Keys. Despite injuries and a heart-valve replacement in recent years, he continues to train regularly with his running partners in San Diego. "Build relationships that will last a lifetime," he says.

Career-profession: I served as a US Navy Explosive Ordnance Disposal Diver (EOD)for 26.5 yrs (i.e., 4.5 yrs active duty and 22 yrs reserves), a Navy Marine Mammal Trainer in Vietnam, and retired as a Navy CAPT. I received a

BS Degree in Biology at U of Fla, MS Degree in Marine Biology at U of South Florida, later received a PhD. in Kinesiology at UCLA, then became a Research Physiologist at the Naval Health Research Center. (At the same time, I taught Kinesiology and Marine Sciences at Point Loma Nazarene Univ. for 17 yrs.) I also coached men’s High School X-Country at La Jolla High for 3 yrs. and later 3 years as an Assistant X-Country coach at San Diego’s Grossmont High School.

When and why did you start running? After getting my BS degree in Biology at U of Fla, it was time to be drafted or join the military. I had played fraternity sports at college (e.g., water polo, volleyball, baseball and flag football) but not much running. So I began running more (~2-3 miles) to get in physical condition to join the Navy. My father knew a friend (Lail Morthland), one of the few runners in our town (Ocala, FL). I trained with Lail for a few months before going to Officer Candidate School (Norfolk, VA) the Navy. Our longest run was 10 miles and this was my last day running, before going to Navy OCS (Officer Candidate School). After leaving 4.5 years of active duty in the Navy, I went to graduate school at U of South Florida (USF), and began running 3- 4 miles more regularly. After graduating from USF, I returned to San Diego and joined a running group at Balboa Park. This was the beginning of my competitive running. 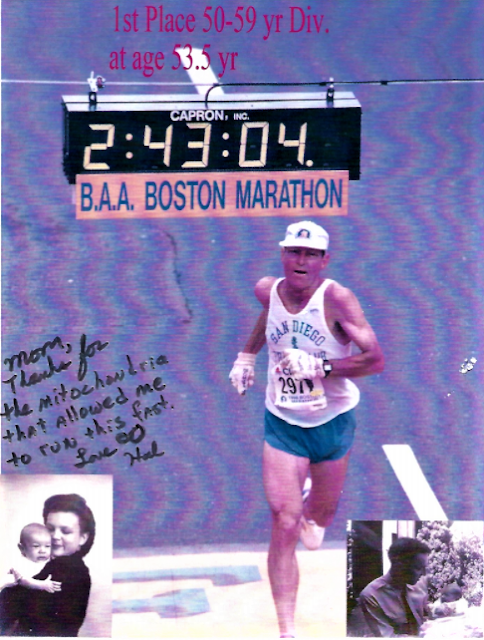 How much are you running and cross-training now? I run weekly on average of 15-25 miles, Stationary biking 2-3X week for 6-9 miles each. I do stretching after watching Jeopardy most evenings and a 1hr 30 min massage every Tuesday.

Any recent race results? I still run with other partners but that can’t be considered racing even though we hold a 5K workout on the last Wed of each month. I can currently “run” a 5k in ~10-10:30 pace.

Does it bother you that you are slower now? No, because my running club friends at USATF Florida Track Club- West have all had a similar gradual loss of speed.

How do you deal with this? Life is still good because we are all still above ground, have good humor and enjoy being together after many years. We celebrate with beer, chips, cakes, cookies and dhampagne when one of us has a birthday or a good workout.

How do you maintain motivation against the inevitable aging process? This is not always easy, but we don’t dwell on the bad …only the good times! It’s our running partners who keep us going… one day at a time and one decade at a time. We inspire each other to keep going, until the inevitable occurs.

How have your diet and weight changed through the year, if at all? My body weight has been ~130-135lbs ever since I left college and the Navy. (My wife hates me because I only eat when hungry and exercise at least 1 hr/day and work outdoors often.) My B.P. is always ~120/70. I still wear the same size clothes (pants, shoes & shirts) as when age 25-30.

Vitamins, minerals, supplements? Occasionally I take 500-1,000 gems of Vitamin C, Motrin, and always have wine with our meals. For ~25-30yrs, we were wine importers from France, New Zealand and Oregon .We have controlled our consumption and drink both red and white wines. Our diet is mostly fish, seafood chicken, salads pasta small potatoes, and some lean meat. This reminds me …it’s time for supper with a vegetable salad, small yellow potatoes, a Cornish hen and an Oregon Pinot noir.

Any favorite inspirational quotes? "The marathon will humble you." Bill Rodgers. "If there were no tomorrow, how hard would you train today?" R3 Sportswear. "It ain't over til it's over." Yogi Berra

1--Train with a goal, and train gradually to meet that goal.

2--Train with other runners with like abilities and goals.

3--Don’t try to race or train when you are injured, build up your mileage gradually while increasing volume and intensity. If you get injured and miss training for a number of days, it may take you the same number of days that you didn’t run before you can return to your previous level of running.

What are the biggest lessons (life lessons and running lessons) you have learned from running? Always treat others as you would treat yourself, build relationships that will last a lifetime. Develop close and honest friendships. Remember that running on a regular basis will improve your health and fitness, reduce illness, and extend your life span.