PROFILE: Frank Bright has been running for 59 years

(Apr, 2021) Last November Frank Bright ran a sensational half-marathon--a 1:51 at age 76. But the Shreveport, LA, runner had a few bad races as well in the following weeks. He was puzzled. Then things got worse. In early January, he learned that he had suffered a heart attack, and would need surgery and stents. Okay, you do what you gotta do. By March, Bright was running again, and in April he raced, modestly, in a local 5K. He hopes to be marathoning again later this year. He says running has taught him not to obsess over where you are on the race course ... or the life course. In another mile, or a few more weeks, a dark outlook often looks much brighter.

Career-profession? I spent 6 1/2 years studying Chemical Engineering (B.S. and M.S.), 3 1/2 years working in the field for Dow Chemical in Baton Rouge, Louisiana, and then turned to law (LSU-Baton Rouge). While in engineering graduate school, I coached the LSU

cross country team. I practiced law (real estate, oil and gas, wills, trusts, estate planning and probate of estates) for over thirty years in my hometown of Shreveport in a small law partnership, retiring in 2007 at 64.

When did you start running and why? I was a student manager for football, basketball, and baseball in high school and water skied with the coaches in the summer. The various coaches saw that, by my senior year, I had developed physically. I had run with the basketball team in preseason training and practiced with the team. In addition, they knew that I could waterski until the boat ran out of gas. After basketball season my senior year ended, it was time for baseball, but the other coaches ganged up on the baseball coach and told him that I was going to run track. He was not happy to lose his statistician/scorekeeper. He finally agreed, but on the condition that I had to win in order to continue in track. I won and landed a track scholarship to college. 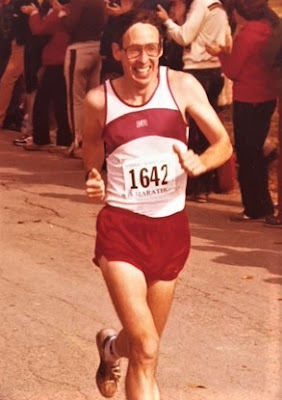 Any estimate of your total lifetime miles? 63,000

How are you dealing with the aging process and getting slower? I have handled this pretty well. Younger runners that I know flatter me and older ones inspire me. Since organizing a network of over thirty guys who qualified for the 2020 Boston Marathon in the 75-79 age division, I have used this group for motivation.

How have your diet and weight changed through the years, if at all?  Vitamins or supplements? No change in diet.  Weight was 120 in college and increased basically linearly through the decades to about 140 pounds recently. Most recently however the pandemic and training for a hot weather (Virtual Boston) marathon got me down to 130 for the first time in 15 years. No vitamins, minerals, or supplements.

How much are you running and cross-training now? I do some dynamic stretching after a 5 minute jog for warmup. I have done two types of calf stretches since my bout with plantar fasciitis.

Injuries? Had the same knee cartilage trimmed in 2006 and again in 2013. Plantar fasciitis twenty years ago. Health  issues - None, until heart attack on January 2nd. I had a stress test on March 5, which went well. According to my cardiologist: "Good evening. I have good news about your stress test. You passed!! Your ejection fraction (how much blood your heart pumps with each beat) is 45%. Normal ejection fraction is 55%. You asked about how much damage the heart suffered with your heart attack, fortunately not much at all. You've only lost 10% of your ejection fraction."

My young cardiologist (he has run four marathons) found one coronary artery totally blocked. That caused my January 2nd heart attack. Fortunately, it was not the coronary artery that kills you. He stented it right away, thinking that it might do me some good. In March he put two stents in the “widow maker”, which was 70% blocked. Part of the delay was in obtaining a 48 millimeter stent (the longest ever used in this area). I then  passed a nuclear stress test and was instructed to “see me in six months”. That sounded good because he knows full well that I might run a marathon within that timeframe. I have been running 3-4 miles every other day (10:00 pace) and finished a hilly 5K race in early April slightly slower than that pace. 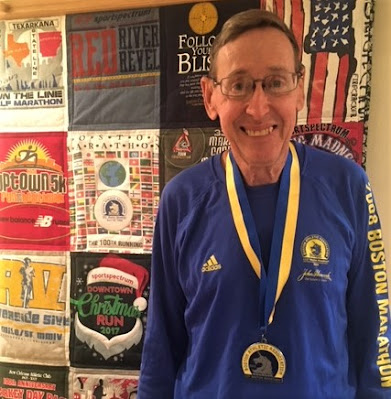 What keeps you running? I just generally feel good all the time, but also sleep well, stay “regular”, and eat as much as I want without gaining weight.
Biggest life lessons learned through running? I try to embrace adversity since we all have plenty of it in our lives and in running. Joy comes in overcoming adversity. I believe that it helps to look at life and running as non-static. Our situation is always changing. What may look like a bad situation at one moment will be different soon. Running is a clear example of this. At one point you may feel discouraged because you have half of the race yet to run, but you can cope by knowing that soon you will have only one-third of the race left, and then your mind will deal better with the situation.
Email ThisBlogThis!Share to TwitterShare to FacebookShare to Pinterest
Labels: profile
Newer Post Older Post Home