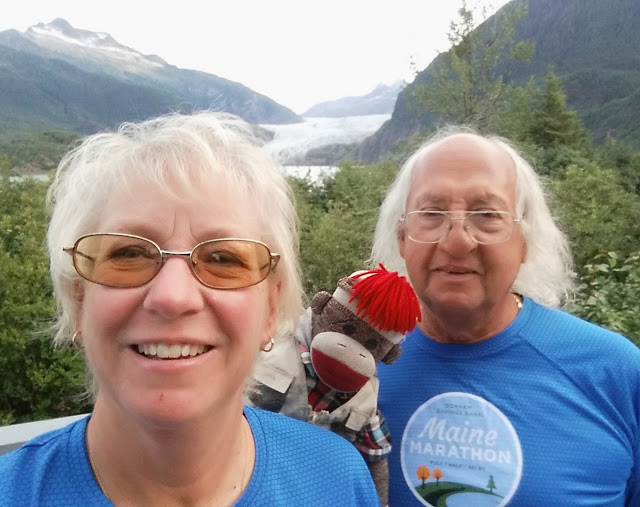 (Mar. 2022) Steve (72) and Paula Boone (a mere 55) are fixtures in the running community. Based in Humble TX, they run on average 20-35 marathons a year. Paula was originally from Utah but after meeting a longhaired hippy at the 1997 Boston Marathon she lost her heart to him and embraced Texas.  Steve just completed his 800th marathon at the Houston Marathon in January. He did his first marathon there and runs it every time he hits a 100 anniversary. His most prolific year of marathons was in 2014 when he ran 46.  Paula reached her milestone of 365 marathons in January of 2021. “This way I have a tee shirt for every day of the year without doing laundry,” she comments.  She runs an average of 14 marathons a year and as many as 35 but says Steve is much more dedicated than she is. “I don’t love running.  I love to eat, travel and hang out with my friends and doing marathons in all 50 states multiple times allows me to do all of those things.  Running is just the painful part of getting there,” says Paula.  Between them, they have 6 kids, 9 grandkids and 1 great-grandkid.

Career-profession? Steve: I am mostly retired from my career as a computer programmer and feel a bit like a blacksmith after cars became widely available. Paula is a retired schoolteacher. In 1992 I created the Marathon Challenge program. The original intent was twofold. I wanted

elementary school students to learn that the marathon distance is 26.2 miles in an attempt to prevent their parents from continually asking me how far my last marathon was. It seemed like a better idea to teach the students rather than repeat myself. My other goal was to encourage students to work toward a long-term goal and complete it. As an incentive the students would be awarded a t-shirt at the end of the school year if they completed the marathon distance.
The first year, only 14 students completed the distance. I believed that my idea was a failure because of the low completion rate and my youngest son only ran 25 miles and did not earn a shirt. The second year, several hundred students completed the marathon distance and earned shirts. We now have as many as 10,000 students and faculty members in 27 schools earning a shirt each year.

In 2000, Paula and I started the Texas Marathon, which is always held on New Year’s Day. We offer huge medals, hot pizzas delivered every hour, and treat every runner like family members we actually like. In 2001 Paula and I also started the 50 States Marathon Club so that keeps us busy when we aren’t running marathons.

When did you start running and why? Steve: Sometime in mid-1987 one of my clients bet me that I could not run a marathon. At the time, I was playing soccer in a 30 and over coed league and thought it would be an interesting goal. It only took a few 10K’s to understand that running fast on a soccer field had nothing to do with long distance running. Running the first mile at a five minute pace translated into dragging my carcass to the finish line and suffering mightily.

In January of 1988, I completed the Houston Marathon, my first, in 4:29 and was disheartened after having a 3:30 goal and failing so miserably. I’ll be running my 34th consecutive Houston Marathon this January, which will also be my 800th lifetime marathon. I have carefully planned my race schedule over the years to have marathon numbers 100, 200, 300, 400, 500, 600 and 700 occur at the Houston Marathon. 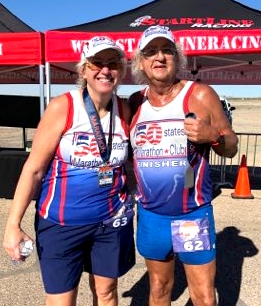 Paula: I started running when I beat a boy at a race in 6th grade. I ran track in junior and high school and thought the first women’s Olympic Marathon in 1984 was the coolest thing ever.  After having two kids, I needed to get in shape.  I started lifting weights, doing aerobics and then started running on the track at the gym.  A lady saw me at the gym every day and invited me to join her running group.  They were all getting ready to do the 100th Boston (4/15/96).  They helped train me for my first marathon 5/11/96 at the Antelope Island Marathon in Utah. I ran an ultra that summer and a BQ in the fall.

What were some of your better/memorable races? Steve: In October of 1991, I trained much harder and was able to run a Boston qualifier in 3:20 at my 13th marathon in Chicago. In 1993 at the Black Hills Marathon in South Dakota, I ran my personal best of 3:04:51 on a difficult course.

Paula: My most memorable race was Boston 1997. That’s where Steve and I met.  Running the continents made for some very memorable races. The Big Five Marathon in South Africa ran in a game reserve with lions, elephants, giraffes, hartebeests, etc. The Great Wall Marathon was a tough race with 7 miles actually on the Wall in China. Running with kangaroos at the Shepparton Marathon in Australia was amazing. The toughest race was in Antarctica. We camped in tents and ran with penguins. America is a wonderful country and we have been blessed to see so much of it.

Did you have an early inspiration or person who motivated you? Steve: Motivation came from being challenged to run a marathon. After performing below my original expectation, there was a voice in my head that told me to try harder.

Paula: My mom has always been a great inspiration and motivation for me.  She has always been a very independent woman who overcame many challenges and she still took great care of us and loved my dad completely. She’s run several 5Ks in her 80s. She taught me not to ever give up and not to settle for less than the best.

How much did you run per week in your peak years? Now?Steve: I have kept track of completed marathons and ultras but never logged mileage. My highest mileage for one week exceeded 180 miles while completing seven marathons and proved that ego trumps common sense. When I was younger and faster, one hundred mile weeks were not uncommon. Currently, my mileage varies from 40 to 70 mediocre miles a week. The advantage to being slower is that I can work on my tan and retain my nickname “Tan Ben Franklin.”
Paula: In my peak (and young and skinny years) I probably ran about 40-50 miles per week and worked out 6 days a week.  Now I try to get my 10,000 steps in each day.  I run about 20 miles a week and then run about 1-2 marathons a month (before Covid).

Cross Training: PauIa and I are continually in our pool swimming laps unless we decide to drift around on pool floats and nap in the sun. Napping seems to be winning out these days.

How has your diet/weight changed through the years?  Steve: Aging has caused my weight to increase. I am fairly serious about eating healthy but hate to feel hungry. Ben Franklin was never a skinny guy when he was old either.

Paula: My weight fluctuates (code for I’m fat). I struggle to keep it in check.  As I’ve said before, I don’t much care about running, but I love eating. Steve thinks it was false advertising since I was skinny when I met him.

How important is social running to you? If you were/are a competitive runner, can you adapt to the slower times?

Steve: I am not a social runner but acknowledge virtually every runner I see unless I run out of breath and am panting like a dog. Running slower times drives me crazy but as hard as I try, gravity and old age are not my friends. Placing in my age group because the rest of the old folks are in nursing homes or using walkers is not satisfying. On the other hand, finishing last or near last in my age group is worse.

Paula: My first year of marathons was pretty successful.  I came in 2nd female in my first marathon. I PR’d and qualified for Boston at my 3rd marathon.  I then started chasing states and my times got slower.  I have much more fun running slower and chatting with friends.  I think I’m more of a social runner than anything.  All the real fun is near the back of the pack!

Obstacles along the way:  Steve: In 2016, at mile 3 of a 12-hour event, I tore several ligaments that attached my Achilles tendon to the back of my heel. I had to limp through 23 more miles on a muddy trail because it was the last state in my quest to complete the states for the 6th time. I had to change from the marathon to the 5K at Kona the next weekend, limped slowly and was able to edge out my mother-in-law at the finish line. Three weeks later we had a marathon scheduled in Las Vegas that I had to complete so there would be enough finishers for Paula’s completion of the states for the fourth time.

In August of 2017, I had a staph infection in my knee that required eight days of hospitalization and continual antibiotics to prevent the loss of my leg. This coincided with Hurricane Harvey and massive flooding in our area.

Paula: At my PR at St. George, UT in 1996, I injured my IT band.  My doctor said he thought that maybe I wasn’t cut out to run marathons.  I slowly rehabbed that injury and have had a few others along the way.  Steve always says that we don’t get injured, we just get re-injured.  We’ve already broken everything before. 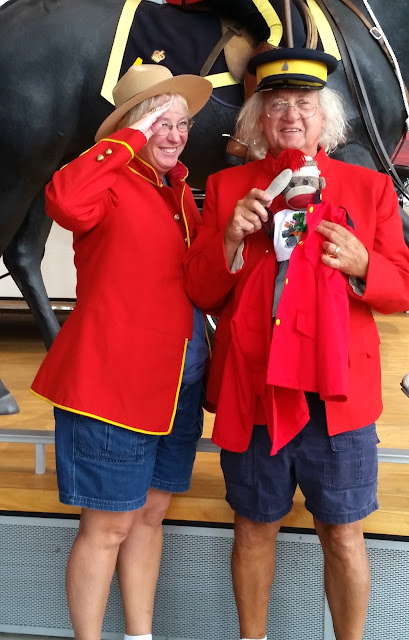 Has running helped you with the aging process?  Steve: Running has always helped me deal with life. It has helped me design software projects when my focus had to be on two things: breathing and the project. Running makes me a part of the community with people continually saying they are inspired to get outside. Running keeps the mind and heart young. The mirror tends to dispel that conclusion. Stay away from mirrors.
Paula: Since most of my running friends are older than me, I feel like a kid.  After running with folks in their 60s, 70s and 80s, I don’t feel like there is a time when you’re “too old” to be active.  The folks in our 50 States Marathon Club are all very self-motivated adventuresome people who don’t put limits on themselves.  They’re great examples for me.

Running Philosophy? If you think you can, you can. If you don’t, you are dead right.

A Favorite Quote: “Can you work or are you just ornamental?” –Hunt for the Wilderpeople

What three tips would you give someone who wants to be a life long runner?
1) Make friends; they will last you a lifetime. You can plan “runcations” together and see the world at street level.

2) Make a positive difference in your community.

3) Do not take yourself so seriously. If you need to reinforce this, stand nude in front of a mirror and try not to laugh and point.

What are the biggest lessons you have learned from running?Steve: A regular everyday runner can have a tremendous effect on their surroundings and can impact the lives of many thousands of people they will never meet.

Paula: Running has made me more patient.  After spending so many hours on the road I don’t need immediate gratification.  Running also taught me pain management. I still hurt, but I can deal with it for longer periods of time.  When I was getting a mammogram recently, some of the other ladies were asking if it hurt.  I had to laugh because I only had to count to 20.  After spending 5-10 hours running, 20 seconds is nothing.  I did tell them that I probably wasn’t the best person to ask since I’m a marathoner.