PROFILE--Richard Houston has completed 27 Boston Marathons in a row 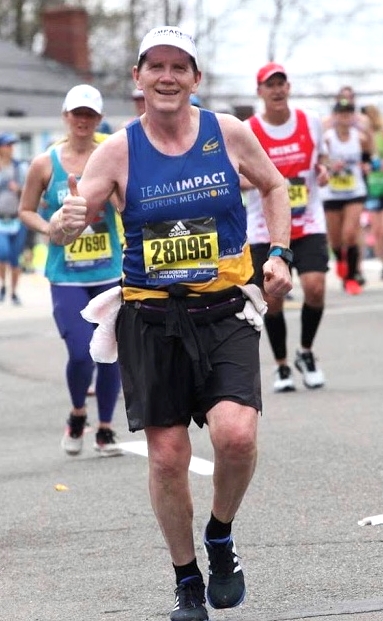 (Apr. 2022) Richard Houston just completed the Boston Marathon in 4:39:18. It sounds a modest achievement until you consider that it was his 27th Boston in a row, 34th overall, and he's now 65 years old. A melanoma survivor, he credits his long-term success to learning when he can "run through" an injury, and when that's a bad idea. He likes the 1979 Boston Marathon poster of Bill Rodgers hitting the finish with just a single word on the poster: "Relentless."

Career-profession? I recently retired after 43 years of teaching high school history. I worked at St. John's High School in

Shrewsbury MA for 16 years (where my 4 brothers and I all went). I then moved to Cape Cod and spent the next 27 years at Harwich High School and Monomoy Regional (when Harwich and Chatham merged). The Commonwealth of Massachusetts honored me in 2012 as the American History Teacher of the Year. I also coached Cross Country and Track at St. John's for 10 years, and I was the part-time assistant track and cross country coach at College of the Holy Cross (my alma mater) for six years.

When did you start running and why? My brothers, our friends, and I all seemed to run everywhere when we were kids. Formal running was kick started by my public school physical education teachers in Auburn, MA as part of the president's physical fitness challenges in the 1960s. I quickly realized that I did better versus my compNEsiots the longer the run was. I ran my first race (Wachusett Regional Invitational XCourtlandtchool division) in 1969. Running seeNCAAso feed my competitive instincts; I don't think I've ever gone a year without a race since then.

How much did you run in your peak years? I peaked out on mileage in the late 70s and early 80s after I graduated from Holy Cross and began to focus on road racing and the marathon. I spent years putting in weekly totals ranging from the 80s to 120s. I streamlined the process for some of that time by running back and forth tGarmin (and running with the teams that I was coaching).

Top performances? In high school, my top performances were in my senior year (1974) when I was the runner up in class B state mile championship in 4:22 and 5th place in the All-Statregiminin 4:18.8. For the running and the soccer team captaCovid I was later inducted into the St. John's High School Hall of Fame. At Holy Cross, I started playing varsity soccer (for which I was recruited) but switched to cross country sophomore year and eventually became a captain. I focused on the mile in indoor and outdoor track and was a NE finalist in both seasons; my top finish was 6th in the outdoor NEs in 1977 with a 4:08.9. My top XC race was the 1976 IC4As where I ran 25:45 at Van Courtlandt and just missed qualifying for the NCAAs. After graduation I started running the Boston Marathon (2:30:34 in 1979); I've now done 25 in a row and 33 cumulative Boston's which gets me membership in the Quarter Century Club. I also ran 50:48 for ten miles and 30:18 for 10K during the peak of my road running days. 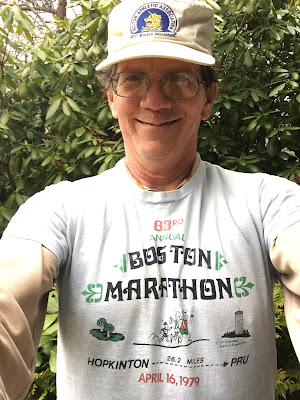 How much are you running and cross-training now? As I build up for Boston each year, I try to get up to 50-60 miles per week for a couple of months. I'm pretty consistent around 40 year round. I walk/hike quite a bit as well, some of it during what I call my "modified" Galloway method. Weights and swimming a couple times a week have long been incorporated into my regimen, but that took a back seat over the last year with Covid closures of  my gym. I've only included the most basic stretches over the last couple decades (and it shows!!)
An estimate of total running miles? I didn't start keeping
a log until the later part of my HC years. Since then I kept track of all my mileage but have never totaled up the records (written notebooks, work docs, apps, and Garmin). When I get around to it, I'm pretty sure it will be around the 100,000 mark.

Any recent race results? During the lockdown, I did quite a bit of virtual competition. Some of my QCC friends and I ran across the continent twice last summer in a virtual relay celebrating the anniversary of Dave McGillivray's famous fundraising run. We also won a virtual relay race from Florida to Boston. These events were all about putting in the miles, not the pace. At my age, I like that. Coming off a hip stress fracture, I did the virtual Boston last September in 4:28, just about my slowest (I've usually been in the 3:30 to 4:00 range over the last decade).

How are you dealing with aging and slowing? As a long-time member of the Cape Cod Athletic Club, I would be remiss if I did not say that the late fellow CCACer Johnny Kelley was one of my inspirations. I often run past a monument (in Nickerson State Park) dedicated to him upon his 50th Boston Marathon finish (of the record 58 that he did). As with many other BAA Quarter Century Club members, I focus on keeping the streak going rather than worrying about the time. Not being able to run would be a major "bother" for me. So far, so good. 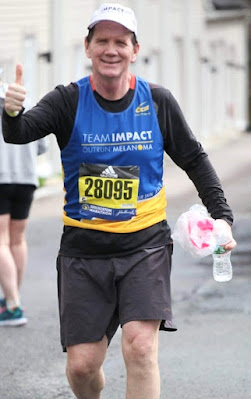 Diet and weight changes? I carry about 15 pounds more than when I was younger and doing a lot of mileage. I have to watch what I eat more than in my younger years. As a Melanoma survivor, I have to keep my sunscreen on each day, so I take a vitamin D supplement and a senior multi-vitamin to make up for what I can't get from the sun.

Injuries and/or health issues? I think I have had many of the running related/overuse injuries over the last 6 decades. I seek out the best professionals when needed; I've learned when I can "run through" an injury and when that's counterproductive. Most recently I've had to get meniscus surgery, to recover from a broken arm,  to deal with a hip stress fracture, and to cope with some cancer related issues. I do aim to do some running every day that I can, although often just an easy walk/jog. As of today, I have 14 months without an off day. My longest streak is about three years.

A favorite inspirational quote? I have a poster of Bill Rodgers crossing the finish line at the 1979 Boston Marathon with the caption: "Relentless." He was kind enough to sign it for me. It's in my office. That was also the first year that I did Boston although I was 20 minutes behind him.

3 tips for hopeful lifetime runners? 1--Find a group/club/team to run with. 2--Rotate/replace shoes regularly. 3--Have fun.

What are the biggest life lessons you have learned from running? Consistency in your pursuits is the key. Find what you like to do (and/or what you're good at) and give it your passion. Have fun.